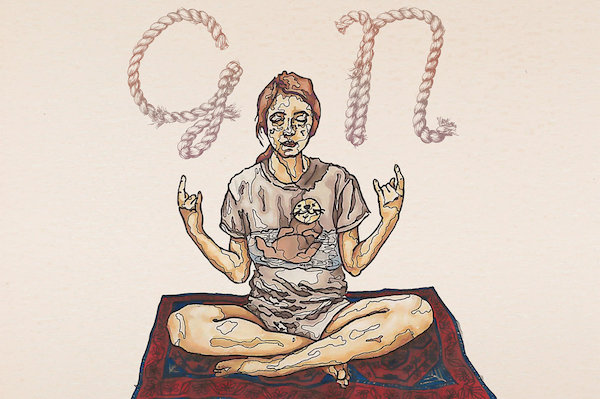 Serenity and Rock Hands: An Interview with Julia Steiner of Ratboys

Ratboys isn't planning on slowing down. They've just wrapped up a short tour supporting Pet Symmetry's new album, but vocalist/guitarist Julia Steiner and guitarist Dave Sagan still have another two months on the road — including the July 23 stop at the Duck Room — as they travel across North America for the release of their own album, GN. It's a wonderfully charming record that blurs the lines between the twang of country and the intensity of rock, all tied together with the pensive whimsicality of Steiner's songwriting. Pet cats and feral children, sisters and Antarctic expeditions; GN manages to weave seemingly disparate fragments into a collection of powerfully personal stories.

When I talk with Steiner over the phone, she and Sagan were at home in Chicago, taking a brief respite from touring before heading out to a show in Iowa later that day. (At one point, Steiner breaks off to check out the new strings Dave had put on the bass. "How are they sounding?" she asks; to which I hear the sound of a bass being strummed in reply.) It's not hard to believe that she's the voice behind Ratboys: she speaks with the deliberation and eloquence of a seasoned writer. "It's always a fun challenge to tell a story within the confines of a song," she tells me. "You have to be economical and concise." We discuss the tour, the making of the new LP, and the genre-bending power of "post-country."

Claire Ma: How is life on the road?

Julia Steiner: It's good! I definitely wouldn't be doing this if I didn't like it. There are new experiences being added each day, even though the actual routine of touring is remarkably consistent. But it's the perfect mix for me: I really like planning and routine, but at the same time, there's lots of new adventures to be had. I'm lucky because I get to tour with Dave, who's my partner and my best friend. I can understand for certain people it'd be really difficult to tour because they're leaving their partner at home or something like that, but we're in a lucky spot where we're together all the time.

CM: Did you write the song "GM" as an ode to touring?

JS: Yes! It's one of those songs where I was excited to say some of my friends' names and put them down forever on a recording. As we keep making music, I'd like to just keep adding verses and make a Bob Dylan-esque, ten-minute long, self-indulgent folk song.

CM: Your latest album, GN, shows more of an emphasis on the narrative element of the songs, as opposed to previous releases. How did the songwriting process differ?

JS: The first time we recorded AOID, it was very spontaneous. There wasn't any deliberation about a tracklist or certain ideas or stories that we wanted to include; they were just songs we had been playing for a long time, and it felt right to do those. This time around, there was a lot more—well, it sounds kind of lame to say "planned," but we definitely took time to think about what songs we wanted to put on there. There were certain songs that I knew I wanted to finish that didn't have lyrics or a focus. Dave and I actually went up to Michigan for a few weeks, not just to record demos but to let me write and revise the lyrics to some of the songs—that's how "Control" and "Crying About the Planets" came about.

I really love storytelling, and in college, when I was studying English, I just soaked up as many stories as I could. Now that I'm out of that environment, I really miss that a lot. It feels good to tell stories through songwriting.

CM: Are there any authors that have really affected your own writing?

JS: I've been reading a lot of Kurt Vonnegut. He has this collection of short stories called Look at the Birdie which is amazing. I love his direct style and how he can be so whimsical but straightforward in one sentence.; I definitely try to write that way, too.

CM: With songs like "Molly," "Control," and "Elvis in the Freezer," there's definitely a familial bent to GN. How did your family influence this record?

JS: I really miss my family: I'm the only one here who lives in Chicago—the rest of them are all over the place, so I don't get to see them very often. GN was kind of a way to connect with them and gesture toward them in a permanent, solid way. When I was growing up, I struggled with being able to show affection, especially to my siblings. It's not that I thought I was too cool—it just didn't come naturally to me. This was a way for me to make up lost time and be very direct about how I feel and what my siblings and my parents mean to me. At this point, it's just a way for me to stay close to them, even when they're not there. Plus, it's fun to sing my sister's name on stage every night.

CM: 'Molly' is about your sister, right?

JS: Yeah! She did the cover drawing for the record as well. She's an amazing artist and it worked out really well. It was fun to collaborate like that—we had never done that before. The idea was meditating—very tranquil and serene—but also with the rock hands.

CM: Ratboys is often labelled "post-country," which is an odd term considering you've played with acts from all over the spectrum, from math rock to Midwest emo—basically, genres one wouldn't typically associate with country.

JS: 'Post-country' is a goofy term that I made up in college. When I was growing up, I had never really heard of these funny genres, like post-hardcore, post-rock, post-whatever; it's a strange thing to just assume that anything ever truly ends, as far as genres go. So when I was introduced to these things in college by Dave, I was, like, "Well, we kind of have a little bit of a country thing going, but it's definitely not straight country, and it's more indie than anything. Let's just lump ourselves in with some goofy post-genre." But I honestly do think there's a lot of merit to it—you know, making music that really respects and utilizes certain impulses of traditional country music but made for indie fans and made by people people who—speaking for myself—grew up listening to more indie music than anything.

We play with so, so many different kinds of bands, and that's something I'm really proud of. With our music, there's a lot of versatility, and there's a lot of overlap between different crowds. The Free Throw/Sorority Noise tour definitely solidified that, even though we make music that's not the same as bands in their genre, it definitely fits; we'd meet people every night who said 'We've never heard of you, but we enjoy what you're doing,' and that was really affirming for us.

JS: There you go! I actually have a plan—[laughs] I sound so arrogant for trying to take credit for this—but when I have time, I'm going to sit down and try to come up with some analysis or literature about the term, because I really do want to explain it a bit more. Genre is so cool, and I think that'd be a fascinating way to analyze it—like, a "Post-Country Manifesto."

CM: Do you guys have any future projects in mind?

JS: Definitely. We're actually going back to that same house in Michigan in December to demo out some new songs, and that's gonna be awesome because it's going to be all snowy and strange. And, back in May, we recorded four more songs that were B-sides for GN—songs that we didn't really have a chance to record initially. Those are almost finished, and that'll be a little EP that'll be out on Topshelf soon. It's funny—GN just came out, but my mind is so forward-focused at this point, so I'm excited to work on the next thing.