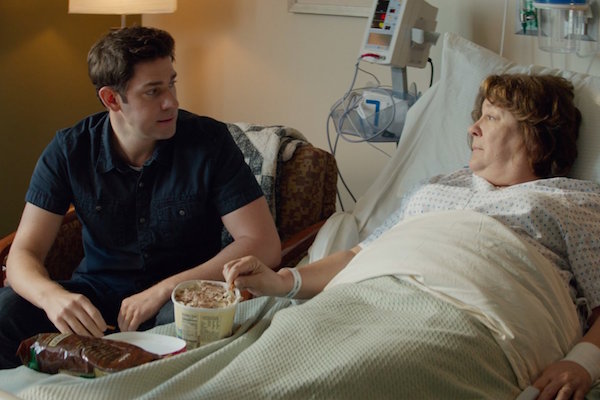 'The Hollars' does not succeed. Discuss.

Seeing a film that does not work can be as instructive as seeing one that does. Granted, a lot of people see movies because they don't want instruction; they just want entertainment. There's nothing wrong with that. That The Hollars does not meet expectations is worth a moment's exploration.

Can't be the cast. Gathered into fewer than 90 minutes are actors of sterling reputations, as comedians and tragedians. First of all are two women with screen cred: Mary Kay Place as a sister and Margo Martindale as the matriarch. Place is kept to a cameo, unfortunately, and Martindale is kept in bed, where she's plucking the coverlet. Still, she manages to exude humor and warmth. Anna Kendrick plays the pregnant unwife, but she connects rarely in the role.

Next, bring on the men: Sharlto Copley is brother Ron, the great Richard Jenkins is the blubbering dad, Don; Randall Park is the stoic doc, Charlie Day is the nurse, Josh Groban is very good as the new husband, and John Krasinski is the other brother, the bewildered John. Krasinski also directed the film from a script by James Strouse, who wrote The Winning Season.

That film had some unpredictables, but The Hollars has only the most predictable of plots. Mother has a tumor, Father is losing his business, Brother spies on his ex-wife, Other Brother won't commit. Occasionally, Strouse's dialogue forms peaks, especially in the fight scenes between Ron and Don and Ron and John. Mother's list of symptoms is oddly funny too. But largely there are not just valleys but whole calderas of incipient eruption.

At least, Strouse resists making sport of the family's name -- like the family Fokkers in that franchise. The Hollars fails but not miserably. It has its moments and its good intentions. So why doesn't it work? Talk amongst yourselves.