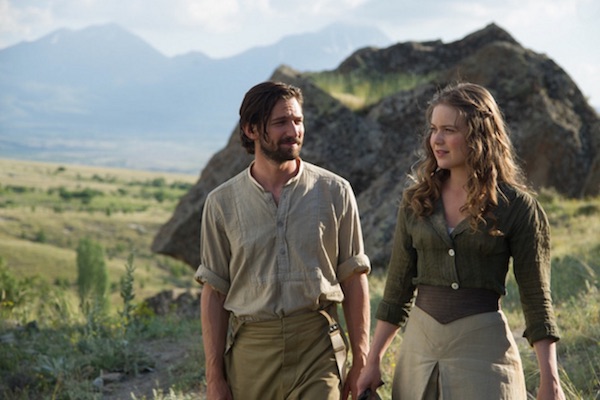 The Ottoman Lieutenant is busy being a romance. One spunky nurse, Lillie, her parents unhappy with her chosen profession, attends a lecture conducted by a medical missionary stationed in Anatolia, Turkey. Have Lillie offer her dead brother's truck to Dr. Jude for medical supplies; have him say no, can't get the truck to Turkey; have her say, pluckily, I'll bring it.

Have Turkish authorities say, "Little Missy, you can't do that. You'll need a military escort." Ta-da: Ismail appears, kitted in uniform and exuding hormones. Violins up, audience in swoon.

For awhile, it's possible to dismiss the cliched dialogue by Jeff Stockwell, who also wrote the astonishingly good The Dangerous Lives of Altar Boys. It's also possible to accept as part of the plot tossed-off references to Christians and Muslims, to soldiers and spies, to doctors doing good--or doing ether. Talkin' 'bout you, Dr. Woodruff, played feebly by Ben Kingsley.

Michael Huisman from Game of Thrones plays Ismail to Hera Hilmar's determined nurse. Josh Hartnett, who has yet to prove that he can act, proves again that he can't as the dashing doc.

Daniel Aranyó's stunning cinematography of Turkey holds attention when the story does not, and Katerina Koutská's set direction, especially in Lille's Philadelphia dining room, grabs eyes. But, overall, The Ottoman Lieutenant adds little to history while shooting at historical romance. Would there have been better balance between the two.