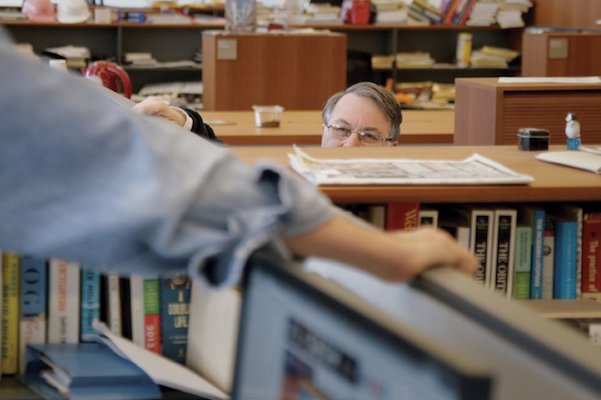 'Obit.' is an impressive doc, about life and life

Even those of us who read obituaries religiously may not have noticed that only the lead obit. in The New York Times includes the verb "dies" in the headline. This titbit and so many others make Obit. an excellent documentary. Like the topic, it is more about life than death.

Director Vanessa Gould exploits the film form of the documentary to study the written form of the obituary, not to be confused with the paid funeral notice. It's not enough to be a good person to have a Times obituary: that person must be newsworthy, too. Gould follows the work of the writers on the death desk at The New York Times, including Bruce Weber, William McDonald, and Margalit Fox. Threaded throughout the film, Gould follows Weber as he researches the life of the political aide who chose the make-up and the podium for the Kennedy/Nixon debates. The clock in the lower right hand corner tracks the deadline, the tension, the stress of getting the story right and getting it good. Weber struggles with the lede (anecdotal or the five Ws?) and defends his position that the aide deserves an obituary at the daily editorial meeting, followed, after approval, by the photographers' meeting.

Sometimes Gould records the writers reading their work, such beautiful syntax and passion, especially Fox's on an oarsman. Discussing their work, these writers are articulate: they've obviously thought about this job, its importance and responsibilities, its influence, and even its amusements.

Gould covers corrections and advances, the obituaries written largely before someone dies. Her documentary includes supportive films and stills of the subjects being described, including an impressive montage at the end. Obit. dives deep, into the morgue, into writers' and editors' hearts and minds, into the dead. Obit.'s world is fascinating indeed.