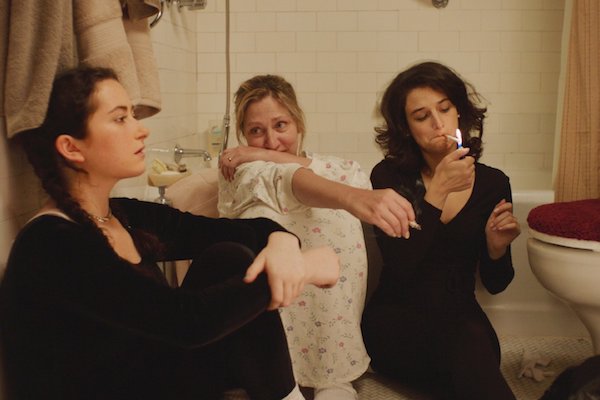 The title's reference to a fading form of communication suggests the decade for Landline, that is, the Nineties. But it says nothing about the chief literary device, that of irony, which each of the characters has to deal with in the course of this multi-generational look at cheating.

Landline, which seems so much simpler  than it is, starts in 1995 on Labor Day. Well, it actually starts with sex in the woods, but once that's over to no one's satisfaction, we move on to the family that's leaving the summer home for the school year ahead in Manhattan. The family comprises Mother and Father and two daughters, the latter far enough apart to seem to have little in common besides judgment.

Ali is the younger sister, part eye-roll, part tempest. Dana is the older sister, wild yet protective. Mother is snarky, especially regarding Dad, and Dad is Dad, that is, until Ali discovers that he's having an affair. Dad?! That old man?! Should she tell him she knows? Should she tell her mom? She tells her sisters.

That titbit of info starts to bring them closer, and watching the two cleave unto one another is certainly sweet but not icky. Jenny Slate works the Dana role well, but she is well matched by Abby Quinn as Ali. Quinn is also in the upcoming Radium Girls, and Slate was so good in Obvious Child.

Landline is co-written and directed by Gillian Robbespierre, who also directed Obvious Child, a sleeper film from 2014. Robbespierre was not able to keep John Turturro from over-acting as the dad, at least, acting beyond what the rest of the cast does here, but she was able to direct Edie Falco as the crushed mother with a mouth on her.

Landline is not so clean-cut as "Obvious Child," and, partly, it seems to barely bear its own weight. But it's one of those movies that has something to say about cheating -- by cheaters.