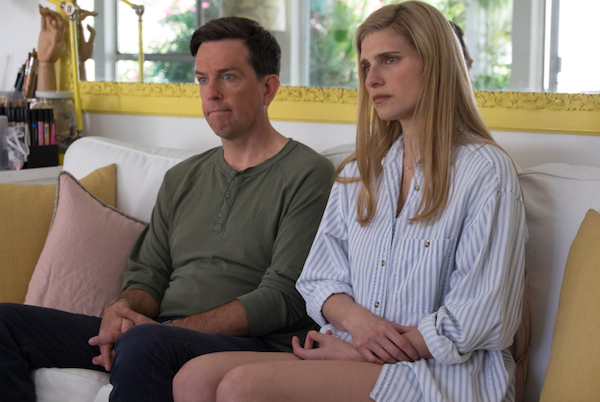 Comedy is difficult; humor about marriage, without being unduly cynical or downright silly, is even more challenging. Extra kudos, then, to Lake Bell, writer, director, and one of the stars of I Do . . . Until I Don't, a sweet, funny, and astute film about three couples assessing their varied relationships.

The clever catalyst is an aggressive, manipulative BBC documentarian named Vivian Prudeck who sweeps into Vero Beach, Florida, hoping to capture some salacious footage, provoking her subjects if necessary. Her guiding principle holds that marriage is a dead idea and, therefore, should be a seven-year agreement, renewal optional. The pairs she hooks into participating are interconnected. Alice and Noah must soon decide about a family. Alice's younger sister Fanny and her partner Zander enjoy a free-spirited, hippy-type environment. And the middle-aged Cybil and Harvey face redefining their lives as they gear up for a momentous anniversary.

Technically, Kayla Emter edits scenes in synch with active or quiet characters, a bit faster for the former, slower for more contemplative moments. Cinematographer Wyatt Garfield frames scenes with foreground and background in play, highlighting the dialogue visually and verbally, thrusting us into the more crowded events and keeping the camera at a comfortable distance when we're encouraged to think about the values and decisions on display. Since there's a documentary being made within this film, documentary style appropriately comes in for spoofing as well. The clueless doc director Vivian sets up awkward interviews, pushes in for extreme close-ups, and designs some terrible compositions, all in the service of her forced drama.

None of this would work if the characters and their interaction didn't feel real, the presentation effortless. Kudos, then, to Ed Helms, Mary Steenburgen, Paul Reiser, Wyatt Cenac, Amber Heard, and Lake Bell who breeze through their scenes, those of some painful import and those just icing on the cake for these expressive actors. Bell introduced her offbeat, appealing humor with her marvelous 2013 film In a World. With I Do . . . Until I Don't she proves that she is a formidable talent: writer, actor and director. At Landmark's Plaza Frontenac Cinema.