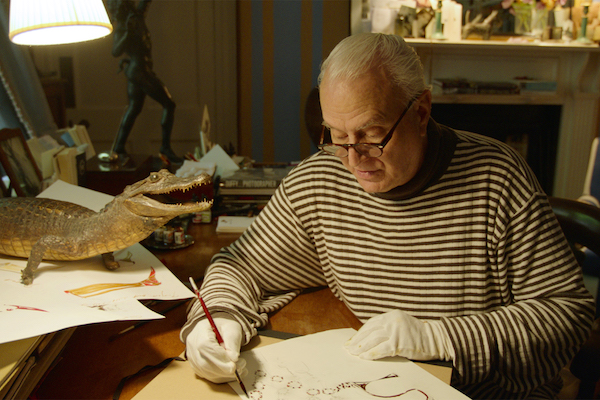 Manolo Blahnik's name is synonymous with shoes -- wild, nose-bleed, calf-lengthening, knee-knocking shoes of amazing construction. Shoes that demand attention and admiration. Shoes whose cost is out of the reach of most women but will forever be connected to "Sex and the City" if not to anything real.

Manolo presents the life of the man acknowledged by many as the most influential shoeman of the 20th century and, so far, of the 21st. He calls himself a "cobbler" in a bit of humble-brag. He knows he's more, but the title connects him to his roots in trade and industry.

Director Michael Roberts, a fashion writer by trade, has produced a fluff piece, albeit a pretty one. He filled the biodoc with famous people, starting with Vogue editor Anna Wintour. She says in her smooth accent, "I don't even look at other shoes." Or Isaac Mizrahi, who speaks hotly about Blahnik's sexy Pilgrim mule, the one with the buckle. Or Paloma Picasso. Leon Talley. Rupert Everett. Princess Diana. Donald Trump. He even got historian Mary Beard to loll on a couch and compare Blahnik with the shoemakers of ancient Greece and Rome and the toe-suckers in those great old cities. That's a get!

Roberts begins with Blahnik's beginnings on Santa Cruz in the Canary Islands where the boy Manolo has an idyllic childhood, chasing reptiles and spending his pocket money on magazines. He arrived in Paris. He lives for making shoes.

Roberts shows him drawing, his hands gloved in white and his body coated in a white garb suitable for the laboratory. But Roberts does not dig deeply into the man or the culture. It's all surface and superficial. Manolo: The Boy Who Made Shoes for Lizards offers a tiny peek into a fluffy closet, but it could have managed a tiny bit more surely.