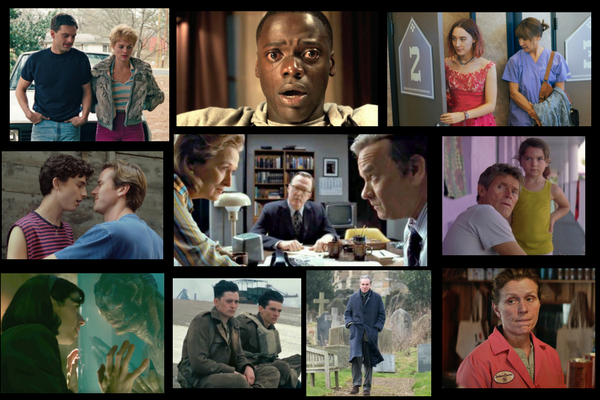 2017 was a good year for cinema. Here are my top ten fiction films.

Number one is director Steven Spielberg's "The Post" for championing and celebrating the critical importance of investigative reporting, holding those in power, and lying to us, accountable. Tom Hanks as Washington Post editor Ben Bradlee and Meryl Streep as owner Kay Graham animate freedom of the press and ethical decision with bold contemporary corollaries. Never preachy, it is potent.

Two, writer/director Greta Gerwig dramatizes a combative and hilarious mother-daughter dynamic in "Lady Bird," as insightful as it is entertaining. Saoirse Ronan and Laurie Metcalf shine.

Four, also on the theme of love, "Call Me by Your Name" presents an emotionally mature, beguiling story of the homosexual awakening of teenage Elio over the course of a beautiful Italian summer.

Five, "Get Out" dares to confront all self-congratulatory white liberals with their unattractive underside. Writer/director Jordan Peele exposes the superficial veneer of respectability in a seductive attack on the myth of post-racial America.

Six and seven, Sean Baker's "The Florida Project" and Craig Gillespie's "I, Tonya" expose class inequity and desperate struggles. In "The Florida Project's" tangerine colored, dead-end milieu on the outskirts of Disney World, children inhabit a motel with inventive energy but little guidance beyond that of the manager, a superb Willem Dafoe. "I, Tonya" tears into emotional and physical abuse from a heartless mother and conflicted husband as well as sports image protocols and snobbery, in this case, ice skating. Building empathy for Harding, Margot Robbie gives a fierce performance.

A bonus eleven, director/star James Franco riotously recreates the production of Tommy Wiseau's "The Room," among the worst films ever made. I applaud all these provocative, inspired works and hope for an equally good 2018. Happy New Year!