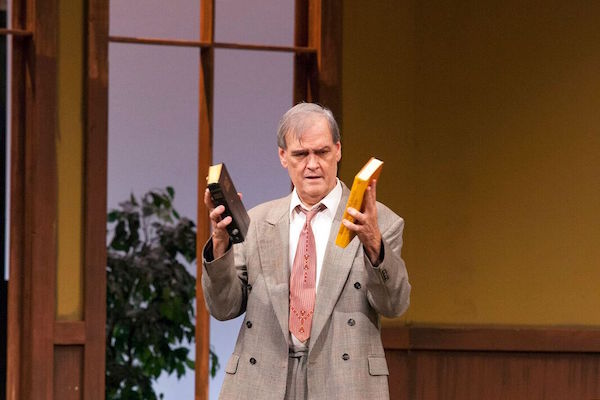 Masterfully performed and still relevant, 'Inherit the Wind' is an educational cautionary tale

Insight Theatre Company closes their season on a high note with a rousing production of Inherit the Wind that feels surprisingly relevant, particularly when one considers a number of recent decisions on curriculum made by education boards across the United States.

Though most theatergoers today grew up learning about evolution in our science classes, it was a legally forbidden subject in many states less than 100 years ago. Inherit the Wind, set in 1925, fictionalizes and recreates key moments from the famous Scopes "Monkey" Trial, where a young educator was found guilty of breaking the law by teaching Darwin's theory of evolution. The original verdict was appealed and overturned, creating precedence that influenced our educational standards for decades, though, as previously mentioned, it is once again being challenged.

Insight's production is bristling with energy, strong opinions, and compelling, captivating performances. The company and director Sydnie Grosberg Ranga increase tensions and ensure the play is all the more thought provoking by avoiding caricature or soapbox campaigning (beyond what's written in Jerome Lawrence and Robert Edwin Lee's well-constructed, historically supported script). Though the play is more sympathetic to the pro-teaching perspective, the characters appear to be written to accurately reflect the principal players in the court case.

The casting compliments the approach and production, pitting the amiable Allan Knoll as Matthew Harrison Brady against the commanding John Contini as Henry Drummond to create brilliant sparring scenes that bring the courtroom drama to life. The two men demonstrate why they're such highly regarded and well-respected actors with performances that are emotionally and intellectually connected. Both men ensure their characters are expressed through physicality, posture, gesture, and movement as much as through the timber and inflection of their words.

As Baltimore newsman E. K. Hornbeck, Jason Contini confirms or restores public opinion of journalists with a cocksure performance that is nonetheless pointed, insightful, and empathetic. He's anything but dispassionate though he's watching the case through somewhat jaded and cynical eyes. The younger Contini's reactions and commentary establish the story's point of view, while his genuine interest in the defendant Cates, and the merits and implications of the case, add emotional context from the audience perspective.

Pete Winfrey and Sigrid Wise are sympathetic and resolute as Cates and Rachel Brown, Cates' love interest and the local minister's daughter. Winfrey capably demonstrates the teacher's personal conflict and sometimes wavering commitment to the cause of education. Once certain, his determination and willingness to stay the course play out through small but important choices. In contrast, Wise is visibly less certain and, while loyal to Cates, she initially pushes him to give up the cause, though her emerging sense of independence is a refreshing touch, considering the period. Susie Wall, Kim Furlow, Michael Brightman, Michael Ferguson, Thomas Schartner, B.F. Helman, and Kent Coffel stand out in supporting roles, creating well-motivated and clear characters. The rest of the ensemble comports itself capably, including Chloe Haynes, Christopher Strawhun, Kurt H. Knoedlelseder, Charles Heuvelman, Matthew Luyber, Don Krull Paul Balfe, Todd Roth, Nicholas J. Hearne, Genevieve Rose Collins, Tommy Nolan, Jennifer Blomstrom, and Kyle Twomey. Many of them have small but not insignificant moments.

Kyra Bishop's set works well, with small fly-ins and details that add to the thematic focus but are quickly changed out, and is complemented by lighting design from Sean Savoie and sound design by Brett Harness, under technical director Joshua Noll. Finally, the costumes by Tracey Newcomb-Margave quickly establish the period, setting, and class status of the characters, with small touches and finer fabrics used to distinguish the more fortunate from those struggling to make it.

In a political season, a play like Inherit the Wind, running through August 28, 2016 at Insight Theatre Company, serves to remind us that our vote often has ramifications that extend well beyond a politician's name or party affiliation. Our response to the challenges that face our country impacts society on every level, including the education of future generations. This stirring production presents a fresh, engaging, and well-performed case for education, helmed by two of our most persuasive stage veterans.