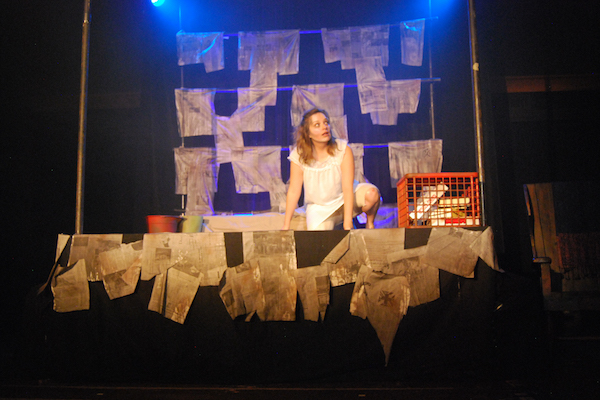 Layered with sensuality and psychology, 'Cuddles' entertains with a moody and twisted vampire love story

At first glance, Slightly Askew Theatre Ensemble's production of Cuddles plays as a macabre love story between Tabby, a young woman in her twenties, and Eve, a 13-year-old vampire and Tabby's little sister. Their relationship is symbiotic by necessity, the little sister has spent her life isolated, hidden from others and sustained by her sister's love and care.

Raised on fairy tales and firm rules governing her behavior, Eve spends her time alone constructing stories grounded in her fanciful interpretation of reality. Confined to a single, dark room, she becomes increasingly clingy and aggressive during Tabby's visits. Rachel Tibbetts is instinctively fiery and erratic; her Eve is brooding, energetic, and unknowingly sexual. Tibbetts gives Eve a curious, inventive edge that is alluring and unsettling, as well as completely true to character.

To counter Eve's changing and often challenging behavior, Tabby enforces strict adherence to the rules, including intensity levels of "cuddles" allowed for physical contact. This action helps Tabby maintain control over Eve's taste for blood, which only Tabby supplies. Tabby's punishments are draconian, alluding to numerous unresolved issues and punishments she more quietly bears. Ellie Schwetye is subtly splendid, reflexively guarded, and cautious as Tabby. Though she comes across as rather cold and impenetrable, her moments of joy burst forth with genuine, delightful surprise. More or less.

There are layers of uncomfortable truth packed between Eve's fanciful construction of her reality and Tabby's casually cavalier conversations with Steve (an unseen character whom Schwetye deftly brings to life), but the audience is left to make the final interpretation. Both Tabby and Eve have been traumatized, but Tabby has the power in this story even as she fights her realization that she may have to make a difficult choice. When the vampire tale is viewed with a psychologically interpretative eye, the story reveals its metaphor with disturbing candor.

There are some unexpectedly graphic moments in a critical scene that propels the show's conclusion. Neither gruesome, violent, nor sexual in nature, the scene may nonetheless startle some audience members. It absolutely serves the story, however, exposing the emerging sub-context, the vampire's truth, and the sister's secrets and pain, and enabling an odd sort of empathy.

Though a few words get swallowed in the rafters, the stage at the Chapel on Alexander artfully suggests a stately old English manor, more than enough castle for two rich young girls. Eve's room is dark, cage like, and lacking in amenities, but there's a suggestion of quality in the details that extends to Eve and Tabby's costumes. Set and lighting designer Bess Moynihan and costume designer Elizabeth Henning are perfectly in tune with Hanrahan's direction and sound design, and dialect coach Pamela Reckamp ensures the lines are delivered with crisp, clear accuracy.

As evidenced by this pensively dark, intensely nuanced and complex production of Joseph Wilde's Cuddles, Slightly Askew Theatre Ensemble remains among the most artistically and intellectually stimulating theaters in the region, if not the entire Midwest. This may be reason enough for theatergoers to add the company's current production to their calendar. Add in Joe Hanrahan's viciously perceptive direction, Tibbetts and Schwetye's profoundly broken yet mesmerizing performances, and excellent stagecraft, and you get a piece of noir theater that shines with brilliance.

The intriguing script demands attention, suggesting a contemporary feminist metaphor, but leaving room for doubt and the possibility of supernatural forces. Driven by inventive storytelling and a dark subject, Cuddles, running through November 12, 2016, is visually engaging, intellectually challenging theater that thoroughly entertains.