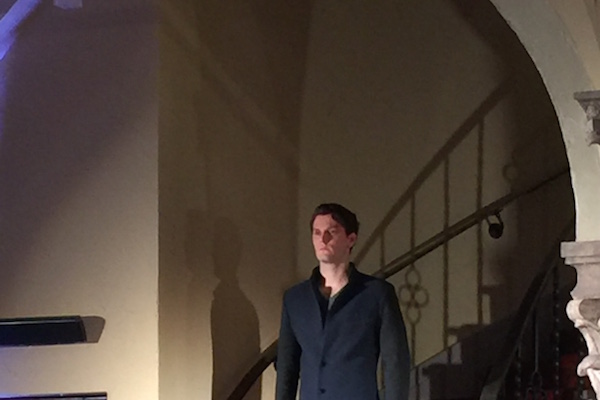 Excellent and accessible, 'Hamlet: See What I See' immerses audiences in Shakespeare

If you're in the mood to shake up your theater calendar just before plunging into the holiday season with its many beloved and familiar shows, I encourage you to consider The Immersive Theatre Project by Rebels and Misfits, Hamlet: See What I See.

My suggestion that you attend another play by Shakespeare may not, on the surface, seem new, fresh or different. But this production -- with nods to participatory theater, French cinema, 80s and 90s art house films, and contemporary deconstructive work -- is anything but staid old Bard. Hamlet: See What I See is an immersive and interpretive experience that invites structured audience participation and requires comfortable shoes. Shakespeare's memorable storytelling and expertly crafted dialogue remains, though it has been pared down to the essential elements.

King Hamlet has died while young Prince Hamlet was away studying. By the time the Dane returns home, his mother Gertrude has married his Uncle Claudius. The show opens with Claudius' coronation and first speech. Loyal friend Horatio's story and a visit from the ghost of Hamlet's father set the inevitable in motion with poetic certainty. The sudden arrival of Rosencrantz and Guildenstern, as well as the unfortunate meddling of Polonius, confirm Hamlet's darkest suspicions and tragedy ensues.

Brandon Alan Smith is enthralling and passionate as Hamlet. His anger is a slow burn revealed in flashes of increasing in intensity until he explodes with fantastic swordsmanship and destructive poetry. Francesca Ferrari and Reginald Pierre are fabulously amorous and entwined to the bitter end as Gertrude and Claudius. Ferrari is distant, frightened, and fragile while Pierre brings a likable charm and surprising insouciance to Claudius.

The radiant Kelly Hummert, artistic director of the company, is a more self-aware but nonetheless delicate and fatefully injured Ophelia. The always-engaging Sarajane Alverson is both master and puppet as the gullible, pliable Rosencrantz and Guildenstern. Lee Osorio is a nimble and observant Horatio, his quick reactions and arched eyebrow sympathetic and telling. Christopher Tipp adds compassion in his portrayal of Laertes, bringing a poignant sensitivity to the character. Isaiah DiLorenzo goes with the flow of the court as an earnest, devoted father and servant of the crown. Well intentioned, he fails to see he's complicit with the crimes committed. Rounding out the capable ensemble, Andy Sloey, Andrea Reed, BlaQue Pearl, Leif Newberg, and Tyler Cheatem provide solid supporting performances, entertaining with limber movements and a prophetic chorus.

As guests of the court, the audience moves with the story, though the majority of the action takes place in the main hall. The show even moves outside for the moving burial of Ophelia, and many members of the audience will view the closing swordfight from the balcony, offering a new perspective from which to view the intricately fascinating fight choreography. The technical elements work in concert with the story, guiding the audience from scene to scene and creating beautifully textured imagery in the context of live theater.

Their purpose is to blur the lines between the audience and the show, and this production succeeds spectacularly. From private tours of the castle Elsinore to the immediacy and proximity of the story's action, the audience is fully enveloped by the show. The St. Louis production integrates music and social media into the entertainment, and audience members are encouraged to take and share photos from their experience.

Shakespearean purists will find plenty to criticize in the production. Yet I found the deconstructed script delightfully enigmatic and the forced focus on the visceral impact of the story completely captivating. Though I did not always have clear sight lines at the performance I attended, there were very few moments when I missed a line, and the overall effect of the show is a truly immersive experience.

The acting, the adaptation, and the elaborate style of Barnett's on Washington ensure that The Immersive Theatre Project's, Hamlet: See What I See, in performance each night through November 18, 2016, delivers a provocative experience. Audience members are invited to dress for and attend a cocktail reception one hour prior to the King's coronation, which opens the show. Then, the oft-studied story is told in logical but seemingly fragmented pieces that slowly assemble into the Hamlet most of us know.