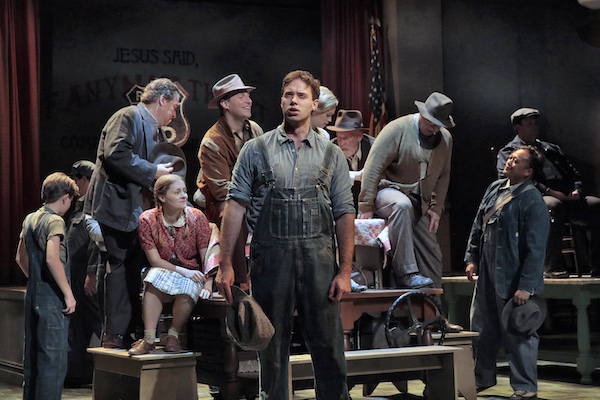 What a show! Opera Theatre of St. Louis has opened The Grapes of Wrath, a work by Ricky Ian Gordon and Michael Korie. I have never in my life been more emotionally moved by an opera than by this glorious production.

John Steinbeck's novel came out in 1939 and won the Pulitzer prize. It was made into a film in 1940. Steinbeck was given a Nobel Prize in 1962. In 1990 a stage adaptation of Grapes was produced. It's an American icon. Gordon's operatic adaptation premiered in 2007 and over the next few years it was produced in several "revised" or "modified" or "concert" versions.

The Opera Theatre of St. Louis commissioned this newly "streamlined" version. It's in two-acts, has a cast of forty and runs nearly three hours, so the original three-act, four-hour work must have been epic indeed. Be that as it may this current version is a work of remarkable beauty and power.

And its story is, alas, startlingly relevant to the problems of the world today. Like the Joad family and the many thousands of "Okies" who shared their plight, the world is confronted with ongoing (or imminent) ecological and economic catastrophes. Had the government acted on the wise advice of science the Dust Bowl could have been prevented. Today those in power and authority seem similarly oblivious to both the ecological and economic advice of those who have learned the lessons of the past. "Pull out of the Paris accords and let the climate go to Hell! Deregulate the banks and make it easier for the 'haves' to further ravage the 'have nots'!" The river of migrants which Steinbeck draws in his novel is an echo of the flood of migrants struggling to escape poverty today. The Grapes of Wrath has lessons for us all.

The score of this opera is light on melody; there's nothing that you'll leave the theater whistling. But there is so much truly beautiful music! Ricky Ian Gordon is a very master of orchestration. The music is for the most part nicely tonal, but with powerful dissonances at moments of stress. It covers a wide spectrum: it can be folksy or jazzy or Broadway or modern and complex. It's very much at the level of Bernstein. There are quite lovely arias and duets, and the many choral passages are rich and wonderfully dramatic. At times many different vocal lines intertwine gorgeously.

Michael Korie's libretto is natural and colloquial and very true to the time and place. It's also true to Steinbeck's subtle but pervasive Old Testament flavor, which comes clearly through in names, phrases, images and themes.

All of the principal singers are given their wonderful moments. Katharine Goeldner splendidly fulfills the demanding central role of Ma Joad. She is impressively gifted -- both vocally and as an actress. She shines with her iron determination to hold the family together. Hers is the essential message of Steinbeck. In a repeated aria she ponders the question, "What is 'us'?" Is it simply blood relation, symbolized in the few small things that must not be left behind?" As the evening passes we see that definition of "us" expanding to embrace all of those suffering in the world. Preacher Casy says of Ma Joad, "There's a woman so great with love she scares you."

Tobias Greenhalgh plays Tom, the son on parole from a manslaughter sentence. Greenhalgh, a strapping, handsome, earnest young man, gives Henry Fonda a run for his money, and he has a strong true baritone voice. Steinbeck would surely smile on this Tom as he sings that famous farewell to his mother:  "Wherever they's a fight so hungry people can eat, I'll be there . . ."

Erstwhile preacher Casy, "a burnt-out Holy Roller," is sung by Geoffrey Agpalo. He has a truly wonderful, clear, strong tenor voice and very fine diction. He captures all the humor and wisdom of this, Steinbeck's Christ figure. (Why did I have a tiny wish that he looked more like John Caradine?)

Robert Orth sings the cantankerous Uncle John, who loves a little drink. From the beginning his is a commendable performance, but late in the evening Orth rises to wonderful and disturbing power in his aria "Dead Little Moses" as he consigns the stillborn infant to the swirling flood waters as a horrid message to the world about injustice and suffering.

The stalwart Pa Joad is sung by baritone Levi Hernandez in another very strong and moving performance.

The pregnant young Rose of Sharon ("Rosasharn") is beautifully sung by Deanna Breiwick, who makes her engagingly innocent and vulnerable.

Hugh Russell sings Noah, the slow-witted son. As with Uncle John this is a role that really blossoms late in the evening, and Russell triumphs in what, for me, is the most inspired scene in the opera. In the novel Noah, sensing that he's a burden to the family, simply wanders off down the river. Here, though, in a style that leaves realism far behind, he clearly drowns -- blending himself with the river, moving slowly and beautifully in silhouette as the water engulfs him.

Jennifer Panara brings welcome bright humor to us in the cameo role of Mae, the truck-stop waitress. A fine job.

The choral work, under Cary John Franklin, is sublime, and this opera is rich in beauties for the chorus! At the very top of the show there is a wonderfully evocative song wherein the dispossessed farmers remember "The Last Time There Was Rain." There's a jaunty chorus of used-car hucksters promising that every jalopy is "A Good Machine." There's the desperate optimism as the Okies head down "The Plenty Road." And at times -- when Noah drowns and when the box containing the dead baby is dispatched to the waters -- the chorus literally and most affectingly becomes the moving river. It's stunning!

Set designer Allen Moyer begins the story in the storefront Holy Ghost Gospel Mission. It's grim and dismal with crumbling plaster. Faded gospel slogans murmur from the walls. The place now serves as a soup kitchen. But we see its old wooden tables, the mismatched chairs and the battered upright piano gracefully rearranged to become a tractor, a truck, various platforms and camps, a highway full of migrants, a filthy and dehumanizing "Hooverville." All of this use is deft and lovely and so much more engaging than literal realism.

Costumer James Schuette dresses the cast with great care. He's faithful to the time, the place, the people. And his palette blends perfectly with that of the scene design. Lighting designer Christopher Akerlind follows the story with a deft, warm and loving touch.

Stage director James Robinson does quite masterful work. His imaginative use of the set is fluid and effective, and in the less-realistic moments -- the river scenes and a stop-action fight and shooting -- he touches genius. But I was even more impressed with his handling of the chorus;  each individual is so real, so distinct, so invested in the scene. The folks coming into the soup kitchen show so subtly and convincingly that hesitancy of one approaching charity among strangers.

That deep emotional investment is apparent in every member of the cast. These are not only world-class singers but very fine actors indeed. Conductor Christopher Allen his St. Louis Symphony musicians do every honor to all the nuances, the vivid life, the complexities of this rich score. The Grapes of Wrath at Opera Theatre of St. Louis is a true wonder and runs through June 25.