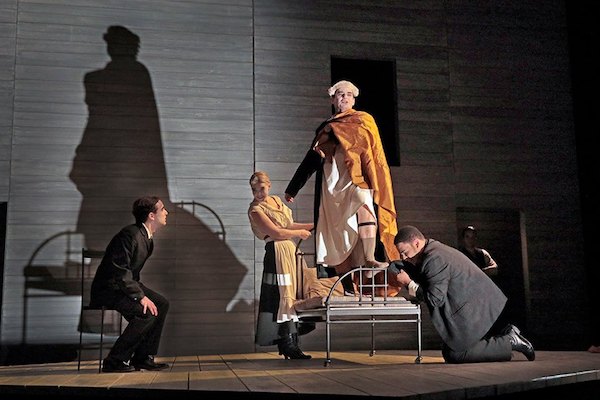 The American premiere of The Trial has opened at the Opera Theatre of St. Louis. This is a very major event in opera. Franz Kafka's nightmare tale of Joseph K, trapped in an enigmatic trial for his life, has fascinated readers since it appeared in 1925. Composer Philip Glass read the novel as a youth and even then he yearned to write an opera based on it. But Glass kept that idea "in his pocket" for sixty years. It was not until he received a commission from the Music Theatre Wales, the Royal Opera, Theatre Magdeburg and the Scottish Opera that Glass was able to fulfill that dream. The London premiere of The Trial opened in 2014.

Philip Glass is arguably the most influential composer of our era. He essentially invented the genre of minimalism -- yet he is so much more than that. (He prefers to describe himself as a composer of "music with repetitive structures.") Forty years ago I was puzzled by his boring repetition. One of us (he or I) must have adjusted a bit over the years, because now I have recordings of Philip Glass music that I actually listen to on purpose. You hear his influence everywhere -- in films, in jazz, in popular music, in symphonies. His music is characterized by a murmuring gentle turmoil, a slowly evolving iteration, a continuous flurry of notes that repeat and repeat, but change ever-so subtly. It can be haunting, mesmerizing.

I was eager to see the meeting of this icon of modern music with Franz Kafka, an icon of 1920s expressionism. The mesmerizing Glass and the nightmarish Kafka! What a combination!

The innocent young Josef K is arrested early one morning. The charge? No one will tell him. We follow him for a year as he struggles to understand this bizarre, mysterious, all-powerful court system in which (as everyone knows) he is already guilty. One is reminded of the endless case of Jarndyce vs. Jarndyce in Dickens' Bleak House.

The cast is resplendent with wonderful voices. Now this is, for the singers, very difficult music. No hummable Puccini melodies here. Often the vocal line seems unrelated to -- or even in conflict with -- the orchestral music playing beneath it. But these are Olympic singers; they carry it off beautifully.

Baritone Theo Hoffman does heroic work with the central role of Josef K. His voice is strong and clear, his diction superb, and, as when he is rudely awakened at the start of the show, he can use vibrato to give a startling bleating quality. It's a fine, committed, athletic performance.

Joshua Blue and Robert Mellon play the guards who arrest Josef K. Physically they're a lovely match. With whitened faces and long dark coats they resemble clowns playing Keystone Kops. While one eats Josef's breakfast the other delights in the possibility of absconding with his clean underwear.  (Could this be a Kafka reference to the Roman guards casting dice for Christ's robe?)  In any event Blue and Mellon have remarkable vocal and comic gifts. Joshua Blue is equally convincing as Herr Block, a pathetic victim of lawyers, the law -- and women; he does an amazingly physical scampering joyful exit. Robert Mellon later does beautiful work as a priest who, in the evening's longest "aria," tells a puzzling parable to Josef.

Matthew Lau brings real power to his portrayals of Uncle Albert and the Inspector.

Susannah Biller, an OTSL favorite who showed gentility and nobility in Elixir of Love and Richard the Lionheart, now bares a quite different aspect. She's simply delicious as Fraülein Bürstner (with whom Josef shares a chaste delicate cartoon kiss) and as the limping nymphomaniac maid, Leni (who spends much of her time tumbling on the floor in sexual abandon with whatever male happens to be near).

Sofia Selowsky gives a fine voice and great variety to several smaller roles. Keith Phares makes Huld, the lawyer, the epitome of legalistic power and obfuscation, and Brenton Ryan makes a very dedicated flogger and gives a very bright and lively performance as the artist Titorelli.

The set and lighting, by Simon Banham and Christopher Akerlind respectively, are simple, flexible, agile: a bare gray wall with two doors, a high window and a hidden closet full of strangeness. It well serves the various scenes from the novel: bedrooms, court chambers, shabby attics, a cathedral. Furniture is spindly wrought-iron, and when beds and tables and chairs are randomly stacked up they cast striking shadows not unlike the works of Giacometti or Paul Klée. Throughout the performance actors are dramatically silhouetted against the rear wall, which lends a strong expressionist nightmare feeling. Costumes by Mr. Banham are a nice period blend of realism and cartoon. Great long scraggly beards add a weird touch.

Stage director Michael McCarthy is the founder and artistic director of Music Theatre Wales. He directed the London premiere of the work, and he manages this shape-changing cast and set beautifully. He stresses the dark comedy. Odd people pop in and out like cuckoos in a clock or like jacks-in-the-box -- to idly, gleefully watch the goings on.

But . . . Despite the wonderful cast, designers and musicians there was something missing. I was captured neither by the mesmeric music nor by the nightmarish story. Somehow the two just didn't bind. There are unaddressed problems:

Be all this as it may, Opera Theatre of St. Louis's fine production of The Trial is a remarkable contribution to modern American opera.  Philip Glass was present to share the thundering applause at the opening performance.