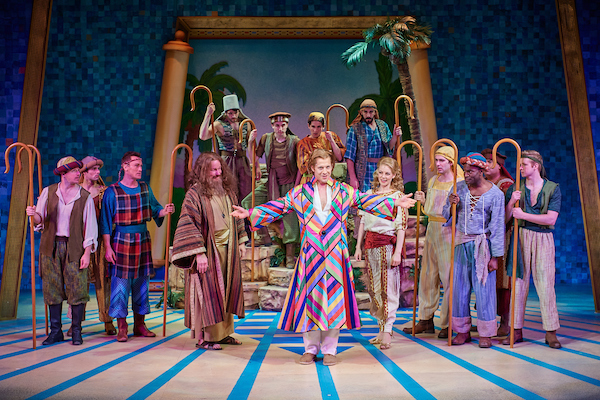 The Old Testament tale of Jacob's son Joseph has fascinated generations and inspired many interpretations. The best-known version of the story is undoubtedly Tim Rice and Andrew Lloyd Webber's musical take Joseph and the Amazing Technicolor Dreamcoat. Stages St. Louis opens their season with an energetic production of the popular show that dances and dazzles its way to success.

The favorite of twelve sons, the prophetic Joseph is sold into slavery by his jealous brothers, but survives and becomes the closest advisor to Egypt's Pharaoh. Many years later, when his brothers come to beg Pharaoh for help, Joseph recognizes them though they seem not to know him. Without hesitation, at least in this version, Joseph forgives and reconciles with the family in a story filled with drama, action, and strong moral themes.

Kirsten Scott is engaging and warm as our narrator. Scott's voice cuts through the ensemble with clarity and precision, helping those unfamiliar with the story keep track. Her singing is rich and pleasant, and she brings just the right touch of showmanship to the part. Her smile insinuates there's much more to come as she sets up each scene and transition with a gesture, flick of the wrist, or snap of her fingers. She occasionally interacts with the ensemble, but for the most part keeps herself distant, clearly in storytelling rather than character mode.

Jeff Sears gives Joseph a carefree attitude that's more reminiscent of a west coast surfer dude than a biblical hero. His voice is warm, with a soft rock timbre that suits the music and arrangements while highlighting his range. In a clever bit of writing that captures contemporary stereotypes, Joseph is blissfully unaware of his brothers' jealousy or the dangers he faces and Sears seems genuinely unaffected. Charming and effusive, he remains steadfastly positive in the face of every challenge, a choice that works to good effect in Stages breezy production.

Stages production of the popular show is fast paced, flashy, and fun. Light exposition leads us through the story, but most of the telling is done via song and dance. The numbers are lively and well executed, touching on a variety of popular musical styles. Clever anachronisms, such as a "FedEx" delivery guy on a scooter, a debit card machine, a smart phone, and a hip-shaking, scene-stealing Pharaoh who's clearly channeling Elvis Presley, add fresh comedy to the show without distracting from the storytelling.

Unfortunately, however, this production feels disconnected. The transitions are serviceable but they don't propel the story forward and the actors, from the leads through the chorus members, at times act as if they are the only one on stage. Simply put the cast hasn't yet come together; the energy is a little lacking, and the tempo a touch uneven, with a tendency to rush through the numbers. Hopefully, the show will find its footing and coalesce during its run. As of now, the overall result is a feeling that the show is quite good, but not quite there.

Additionally, there are so many different musical styles and featured solos incorporated that the show feels a bit like a musical revue and the story gets lost. It's almost as if Rice and Webber couldn't decide on their approach so they included a musical reference to every popular style at the time the show was penned. The "trying to please everybody" approach really muddies up the storytelling in this case. Though all the songs are good and well performed, they simply don't flow together and, honestly, there's not a single piece that stands out.

Still, Joseph and the Amazing Technicolor Dreamcoat, running through July 2, 2017, remains a good story with a humorous approach, pleasantly catchy tunes, and entertaining choreography. Though Bourneuf may have done more to ensure a clear through line, the failings of the show are easily traced to the disjointed and overstuffed book and score, and Stages St. Louis has plenty to be proud of in their clever and entertaining production.