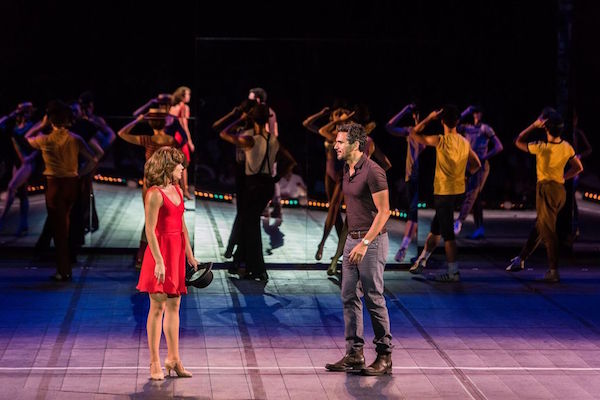 With its ties to St. Louis, and characters from St. Louis and Herculaneum, Missouri, it is no surprise that A Chorus Line holds a special place in the hearts of theater kids from our area. Truthfully, however, the show resonates well beyond the farthest corners of our region. The Muny's current production reinvigorates the soul of the long-running musical in spectacular fashion, ensuring it feels intimate and personal, while delivering precisely choreographed numbers and standout songs.

A Chorus Line made a bold statement that ushered in a new era of musicals, with less dialogue and more athletic, purposefully sexual, and modern dance. One of the longest running Broadway hits, it's been performed a gazillion times -- which can dull its impact. But its central theme, the competitive nature of auditions, combines so well with the personal, confessional script that it remains relevant. The Muny elevates the story with a vibrant, heartfelt interpretation and inventive staging that feels fresh but familiar. Even the video wall at the back of the stage is used to enhance the characters as individuals and the space as an audition stage.

Director and choreographer Zach is looking to cast four men and four women for the chorus of his new show. He informs them that there may be some small speaking roles, and proceeds to launch into a series of questions. The framing works well, enabling us to look into the past and passions that drive these performers to continually put their selves on the line (in this instance, a literal line on the stage) audition after audition. Throughout the show, which runs without an intermission -- an unexpected and effective choice -- we are introduced to each character and hear their sometimes funny, sometimes sad, and always moving stories.

The creative staff weaves in the new elements in a way that is completely unexpected, well connected to the show's themes, and imaginatively revelatory. A Chorus Line's most-loved songs, the crowd-pleasing favorites "I Can Do That," "At the Ballet," "Nothing," "Dance: Ten, Looks: Three," "What I Did for Love," and the show-stopping "One," receive excellent renditions. Sharp choreography by director Denis Jones feels current while still referencing the original groundbreaking choreography of Michael Bennett, and Marroquin's mirror dance during Cassie's "The Music and the Mirror" is breathtaking. The rehearsal version of "One," which includes a perfectly synchronized and dream-like slow motion dance sequence performed while the ensemble sings to the correct timing, is another completely mesmerizing, can't miss moment that may leave you speechless in appreciation.

A Chorus Line is a story of hope, of pursuing your dreams, of picking yourself up and starting over again. The focus on the chorus and not the stars ensures the show remains a journeyman's tale, albeit with a dramatic flair.  The Muny recognizes this simple truth as well as the years of practice, the physical and emotional demands, and the perseverance required for young dreamers to mature into professional dancers. While much of A Chorus Line, running through August 4, 2017 at the Muny in Forest Park, will feel familiar, you may find some surprises in the current production that make you fall in love all over again.