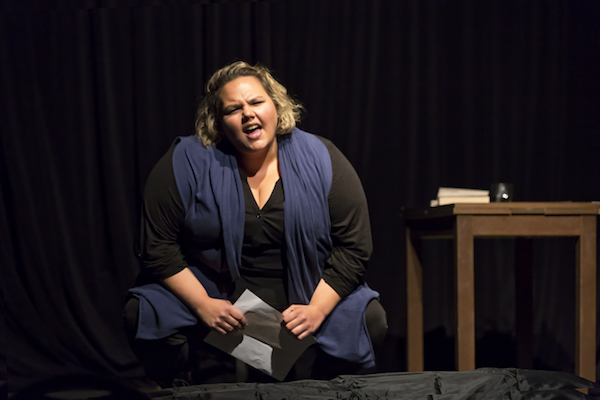 The sixth iteration of the St Lou Fringe Festival saw some significant changes that largely work to enhance the quality and variety of acts performing during the two-weekend festival, which ran August 17 through August 26, 2017. A mix of curated art, the festival includes also lottery-awarded shows, invited artists, and three headline acts. From an audience standpoint, the Fringe looks much the same, only better.

During its run, audiences have the opportunity to see about thirty shows, if they can fit that many into their busy late summer schedule, that are created or produced specifically for the Fringe and are of generally good quality. Following are my reviews of the festival's award-wining shows; additional show reviews and a headline act review are also available.

Matt Marcum's Pollock: A Frequency Parable, winner of the festival's Artistic Interpretation award, perfectly embodies the exploration of art and performance that defines Fringe theater. The show is a nearly immersive experience that envelopes the audience, stimulating multiple senses. Visually and audibly stunning, Marcum brings Jackson Pollock's art and philosophy to life by combining mediums. Video of the artist at work and quotations from Pollock reflecting his approach and motivation are accompanied by rave-like lighting effects as well as original music enhanced by live vocal jazz. The result of Marcum's multi-sensory show is truly modern art in its purest, most active form -- built on principle, influenced by perception, and derivative of nothing. The effect is mesmerizing and wholly original.

Time for Change is a political history play written and directed by Future of the Fringe award winner Tony Marr, Jr. that challenges each of us to learn from the past and work together to create a better future for all Americans. The show opens with the kidnapping and murder of Emmitt Till, tracing efforts to achieve justice and truly equal opportunity through multiple historic references, and concludes with the death of Trayvon Martin, with a closing call to conscious action. Strong performances and a well-focused script ensure the show is as engaging as it is thought provoking.

Darrious Varner and Jaz Tucker, performing as Same Difference, were winners of the Spirit of the Fringe award for their hip hop cabaret Stop Being Weird. A mix of personal stories, original melodies, and verbal hip hop, the upbeat show deals with self-acceptance. The artists display genuine insight and lyrical prowess, but will benefit by adding monitors and ensuring they can hear themselves. The performance space was always pushing capacity and everyone left the show with a smile, a testament to the power of positive self-expression. It's also likely that their song "Wild and Free," which had audience members dancing with the duo the performance I attended, will remain a popular Festival theme.

One-man band Willie Carlisle is a convincing and entertaining musical storyteller with an almost magical ability to personify the characters in Their Ain't No More: Death of a Folksinger, winner of the festival's Outstanding National Act award. In a moving show filled with surprising emotional depth and substance, Carlisle expertly guides audiences through the story arc. Employing well-crafted songs in a folksy style that's capable of rocking a room, Carlisle takes us on an unexpected adventure complete with on-stage costume changes, sing-alongs, and down-to-earth humor as well as a story that's unexpectedly heartfelt and may even cause a tear or two.

The St Lou Fringe Festival Lifetime Achievement award was presented to Joe Hanrahan of Midnight Co., acknowledging his years as both a patron and artist. He returns with a new piece The Everest Game, which he wrote, directed, and stars in, along with several up-and-coming St. Louis actors, including Colleen Backer as Judy Diamond, a BBC reporter with an in to the Beatles who turns out to be a delightfully witty sidekick. The fresh take on a time-traveling show introduces us to Gus, a regular guy with a passion for the music of the Beatles. Buoyed by a belief that one more album could change the future, the story plays with history and, in an inspired choice, features women in the roles of the Fab Four, as well as a Yoko Ono who finally gets the chance to be a fan girl. The conceit works surprisingly well and the show is thoroughly entertaining, though it may be a better choice to have the actors lip-sync to Beatles recordings in future productions.

Elizabeth Townsend, the festival's 2016 FringeMeister, returns to Fringe with the deeply personal and surprisingly visceral On the Exhale. The one-woman show follows the reactions of a mother to her son's death at Sandy Hook. The short play reveals some surprising choices that probe not only the incident and its aftermath, but also our national preoccupation with gun ownership. Though a work of fiction, the show is based in fact and realistically imagines the turmoil and choices of a grieving parent. The story is at times difficult to watch, as it pricks at all sides of the issue, but Townsend's personable, sympathetic performance somehow convinces you to listen and feel. The play is discomforting; different scenes will likely trigger very different responses from each audience member -- and therein lies its true power.

The final award of the night, the 2017 FringeMeister award, went to Taylor Gruenloh, writer, director, and producer of Tesseract Theatre's Hot for T-Rex. Incredibly funny, definitely edgy, and vaguely murderous, the script is a fabulous representation of Fringe theater. Brittanie Gunn turns in a convincing and moving performance as a woman who writes soft-core fantasy pornography and can no longer remain silent to her critics. Armed with her education, self-respect, a body bag, and a few weapons of choice, she methodically tracks down, drugs, and holds her most vicious critics accountable for their words. Criticism of the story or genre doesn't affect the writer; it's the personal attacks and assumptions as well as poor grammar that set her to a rage. Genuinely funny, the production also makes clever use of the lighting design, creating a sense that the audience is seeing Gunn through the hostage's perspective. The language is as raw as the character's emotions, but it's equally humorous and slyly perceptive.