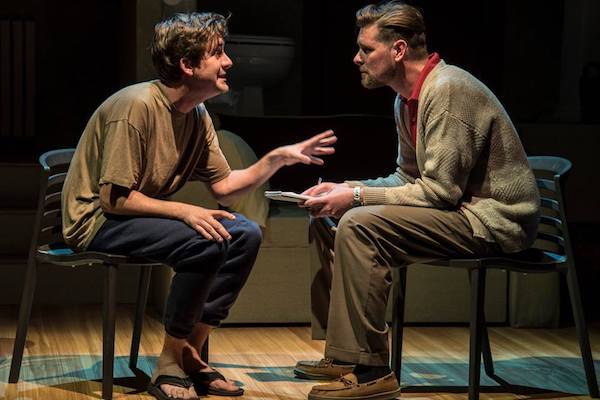 'The Feast' dances from the edge of sanity into the unknown, often disturbing realities of insanity

St. Louis Actors' Studio opens their 11th season with a bold, intense production of St. Louis native Cory Finley's The Feast. The taut drama delves into our perception of reality, releasing deep fears that linger in the corners to come to light. Part psychological thriller, part personal madness, the show successfully builds tension by planting as much doubt in the audience's collective mind as it does the lead character's.

Matt, a struggling artist, lives in an older apartment with his girlfriend Anna. The two live in different worlds, and Anna is feeling unnoticed and underappreciated by her increasingly distracted boyfriend. The strain, though initially undefined, is apparent from the opening scene, though Matt is unaware and consumed to distraction by the building's plumbing. In fact, Matt says he hears voices emanating from the bathroom toilet. Unbeknownst to him, Anna has called the plumber over to investigate their pipes. When the plumber first arrives, an embarrassed Matt downplays the incident -- until the plumber describes, in intimate detail, much more than what Matt told Anna. Or does he?

With the exception of Anna, everyone Matt encounters -- his therapist, a coworker of Anna's, his agent, even the plumber -- seems to know about the voices coming from the pipes and what Matt must do in response. As Matt describes his encounters, as he seems to get confirmation from the men he speaks with, his body tenses, his actions become more sporadic and intense, and his mental faculties at once more focused and less coherent. Are these conversations real or is Matt losing his sanity? Does Anna believe Matt, will she leave him, or does she have other, more nefarious ideas of her own? It is often difficult to discern the truth in The Feast, and frankly, that's part of the show's enjoyment.

Spencer Sickmann captivates as Matt, delving into layers of intellect, desire, inspiration, and insanity with realistic human inconsistency. He fully inhabits the change in Matt and his posture, mannerisms, and ticks evolve as the artist loses himself in his experience. Sickmann's Matt is not to be pitied, but there's a certain innocence, a genuine gullibility behind his confusion that is both disarming and a little disturbing. Are his worst fears also his deepest desires, as expressed through his most significant painting to date?

Jennifer Theby-Quinn is grounded in practical realism as Anna, it's easy to believe that everything's going to be ok, as long as she's around, even if perhaps that's not the truth. Her character is, in many ways, the most realistic, but there's an uncertainty, an air of duplicity that hints at potential danger. Is she helping Matt or contributing to his descent into madness? Is she manipulating Matt in some way or bravely standing by his side and trying to help him survive an experience she doesn't understand? Theby-Quinn creates a character so invested and believable that we only need to hear her voice in the dark to feel the fear and see the scene unfold.

Ryan Foizey is impressively versatile as The Man, effectively creating multiple characters with unique perspectives, expressions, and body language, and the three actors work off each other with naturally and believably. He glibly transitions not only from character to character, but from everyday dialogue to the more sinister and suggestive commands and insinuations of Matt's imagination. Foizey is fluid and seamless in these moments, effectively questioning Matt and drawing the audience in to the confusion.

Director John Pierson steers a talented cast down the path to insanity with a sure hand that resists overplaying the situation. The actors respond with nuanced, integrated performances and believable characters. Matt is clearly losing his grip on reality, but we can still relate to him. Anna is caring and concerned, but we can't fully trust her. The Man always speaks with confidence, but it's impossible to discern the truth from his tone. Even in the most surreal or untethered moments, the characters have a compelling authenticity and react in believable, if discomforting, ways.

The show is precisely constructed and flows at an easy, natural pace while consistently building tension and the dialogue is crisp and purposeful, but the resolution leaves me a bit unsatisfied. The scene in the dark, with just Anna's voice, is so powerful and frighteningly real that it delivers the most potent punch of the show, in my opinion. To me, the concluding scene that follows, while startling, feels too calculated and contrived considering the shocking surprise it intends to deliver. Some audience members will certainly disagree and will likely find the ending twist to provide just the right jolt and scare they desire.

Playwright Cory Finley successfully mixes several genres in his sometimes funny, sometimes creepy, and always intriguing script, and the three actors are thoroughly committed and absolutely believable. Though I wasn't too surprised by the twists, I was quite entertained by the way The Feast, running through October 8, 2017, unfolds.