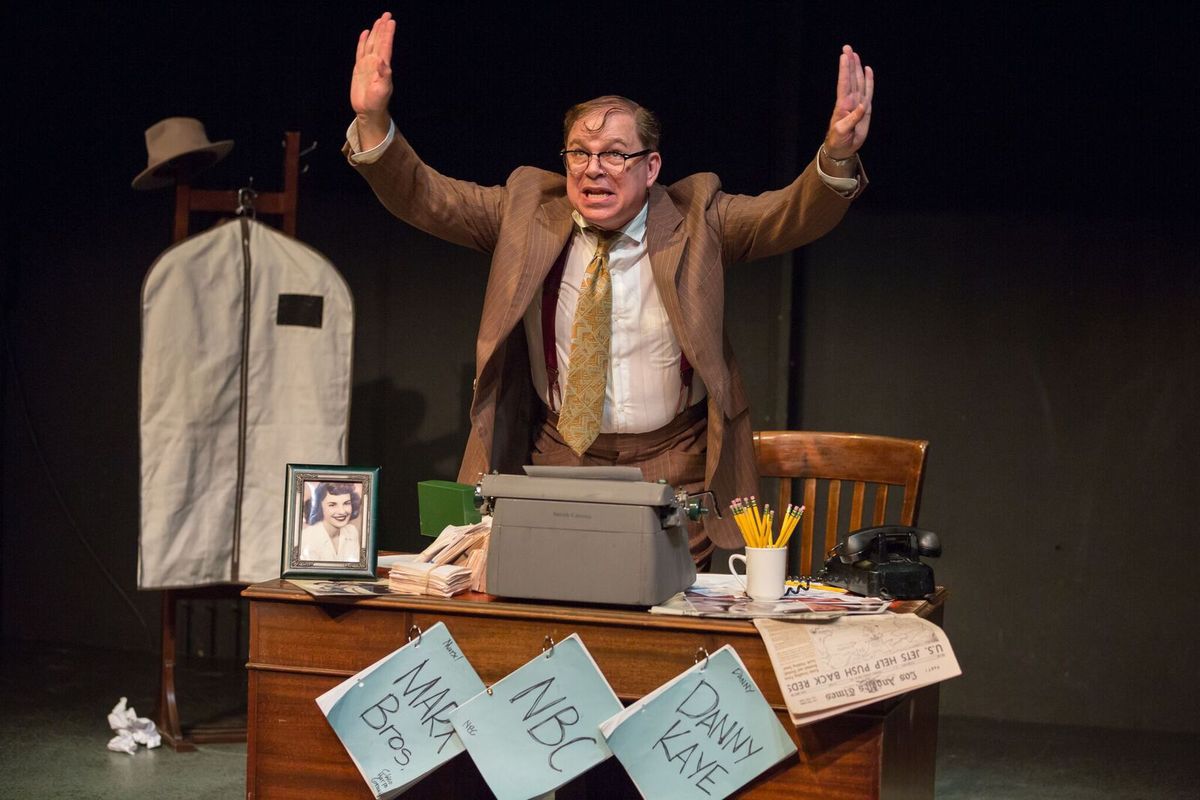 In Yiddish, the term “mensch” is used to signify a person who is a good guy, someone filled with honor and integrity who can be counted on to step up and do the right thing, whether they want to or not. In real life, however, doing the right thing can be complicated. Phil Johnson and Marni Freedman illustrate this issue in the often humorous and highly personal A Jewish Joke, a story that takes audiences back in time to the days of McCarthyism and the hunt for communists hiding among the American public.

Bernie Lutz is one half of a successful comedy writing team preparing to attend the red carpet opening for their first big movie. Lutz has just picked up his and partner Morris’ tuxedo from the dry cleaners and his wife is about to be surprised with a selection of dresses and shoes from which to choose this evening's outfit. The phone is ringing with requests for script updates, meetings, and story pitches with all the studios and major stars, including a project for the Marx Brothers, Lutz’s personal idols. But, before he can relax and celebrate, Lutz has to deal with the small matter of a bothersome letter investigating his partner and him for ties to communism. Unfortunately, the two have been listed on the “Red Channel,” and reporters, studio executives, and an eager FBI Agent are all anxious to hear what Lutz has to say.

To this point, Lutz has lived a mostly charmed life and he figures that he can quickly and easily smooth things over in regards to the pesky issue. As the story unfolds, Lutz begins to understand the serious nature of the accusations, and the very real consequences being on the list have for his career. One by one, the duo’s projects get put on hold or, worse, assigned to other writing teams. Even the Marx Brothers project is jeopardized. When the friendly agent offers Lutz the opportunity to make all his problems go away, Lutz quickly asks what he must do. Will he provide names and details to the agency or will he sacrifice his wealth and comfort for principle? For the first time in his life, Lutz has to decide where his loyalties lie and whether he can be the mensch.

Co-writer and star Phil Johnson brings Bernie Lutz to life in a pleasantly rambling portrayal that draws the audience in with ease. The character is an affable, genial sort, a man who wants to make everyone laugh and have a good time. He sprinkles his conversations with familiar stand up jokes, self-deprecating comments, and homespun Jewish wisdom that always has a moral. Lutz clearly adores his wife and wants to pamper her. He admires and respects his friend and writing partner Morris, and credits him for the pair’s success.

Johnson lets us watch as Lutz talks his way through his competing desires, the pace of his patter increasing with the story’s tension. Johnson ensures Lutz is an active and energetic man, if at times a bit bumbling and confused, with a humble demeanor and sense of justice, or at least an appreciation for right and wrong, that rivals his love of the finer things in life. The set effectively emphasizes his situation, it’s a bit shabby, but there are a number of scripts hanging from Lutz’ desk, signifying potential and upward momentum. As the show continues, and each project is removed from the board, we are faced with an increasingly blank slate, a subtle reinforcement of the very real threats to the writing team’s livelihood.

The lighting is low key, the costumes are well worn, and a bit frayed at the edges, and the sparse office and simple sound design, primarily the ringing phone, emphasize the everyman sense of Lutz. His is a warm and compelling story with a nice arc, but it lags at times and feels like it could be about 20 or so minutes shorter. Incorporating more of the historical background into the script may also help younger audience members understand the context and significance of the story.

A Jewish Joke, running through December 10 at The New Jewish Theatre on the JCCA campus, is running in a limited engagement, and ticket reservations should be made early. The deceptively straightforward show reflects on a time in U.S. history when citizens were encouraged to turn against each other with suspicion and distrust. Though filled with a keen sense of humor, the lesson of this poignant tale is one we would be well advised to heed in today’s tumultuous times.