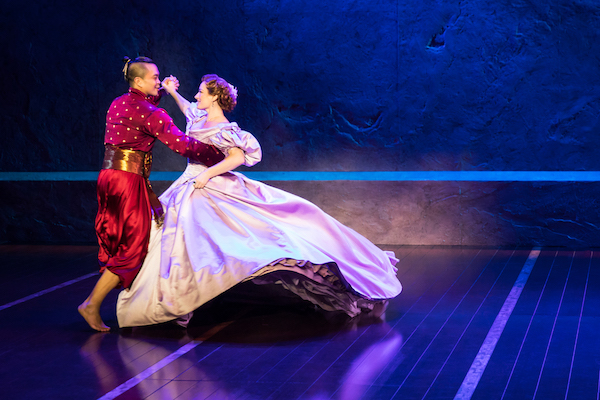 'The King and I' is simple yet breathtaking

It is rare to create a theatrical production that is both simplistic and breathtaking, but Director Bartlett Sher and his creative team have done it with their Lincoln Center Theater Production of Rodgers & Hammerstein's "The King and I".

The airy, gauzy curtains open to reveal a large wooden boat floating on a river of fog as teacher Anna Leonowens and her son Louis arrive in Siam to teach the language and culture of the West to the King's wives and children. The mother and son, despite their years spent in India and Singapore, are overwhelmed by the strange sights and smells. They begin the iconic song, "I Whistle a Happy Tune."

This opening's lighting, scenery and soundscapes work together so well that you can almost smell the Asian riverside city as it was in the 1860's. As the show progresses, settings in the palace are explored with few, choice set pieces on a vast, open stage. Director Bartlett Sher relies on the story's kaleidoscope of characters, gilded costume pieces, and stage presence of cast members to draw his audience into the unfolding story.

Laura Michelle Kelly makes it immediately clear that she was born to play Mrs. Anna. The Broadway star brings her A-game to the Fox, revealing Anna's developing feelings for the King and her understanding of the Siamese people layer by layer. Jose Llana's vibrant portrayal of the King delivers at all the right moments, most poignantly during comedic flashes, and he is framed perfectly by Brian Rivera as Kralahome and Joan Almedilla as Lady Thiang. Almedilla's "Something Wonderful" pushes and pulls through a range of raw emotions. Q Lim as Tuptim embodies every young feminist, at once lovely and furious as she sings, "What does he know of me, this lord and master? [...] Something young, soft and slim [...] eyes that shine just for him, so he thinks!"

The play within the show, based on Harriet Beecher Stowe's "Uncle Tom's Cabin", is the crowning glory of the production. This beautiful ballet has audience members rooting for Eliza, loving her even though we only know her for a few minutes.  The dancers are precise yet jovial and warm. This type of a scene is difficult to do because of the timing--it's necessary to achieve absolute precision between the narrator, dancers, singers, orchestra, actors and lights. The piece was flawless.

The Fox's orchestra deserves a standing ovation for the work they do in "The King and I". The production is largely driven by the music, and the musicians expertly accompanied the performers while completing the historic South Asian setting, providing comedic relief, and building tension.

Sher's re-telling of this iconic show pays homage to the classic, reviving memorable scenes and choreography from Jerome Robbins, but the story doesn't feel stale: Every bow, smile, and turn of the wrist feels fresh and delightful. And the book's theme of gender equality is just as pertinent today as it was when the show debuted in 1951.

With choreography by Christopher Gattelli, music direction by Ted Sperling, set by Michael Yeargan, costumes by Tony-Award winner Catherine Zuber, lighting by Donald Holder and sound by Scott Lehrer, "The King and I" is playing at the Fabulous Fox through December 10th. For more information, visit www.thekinganditour.com.