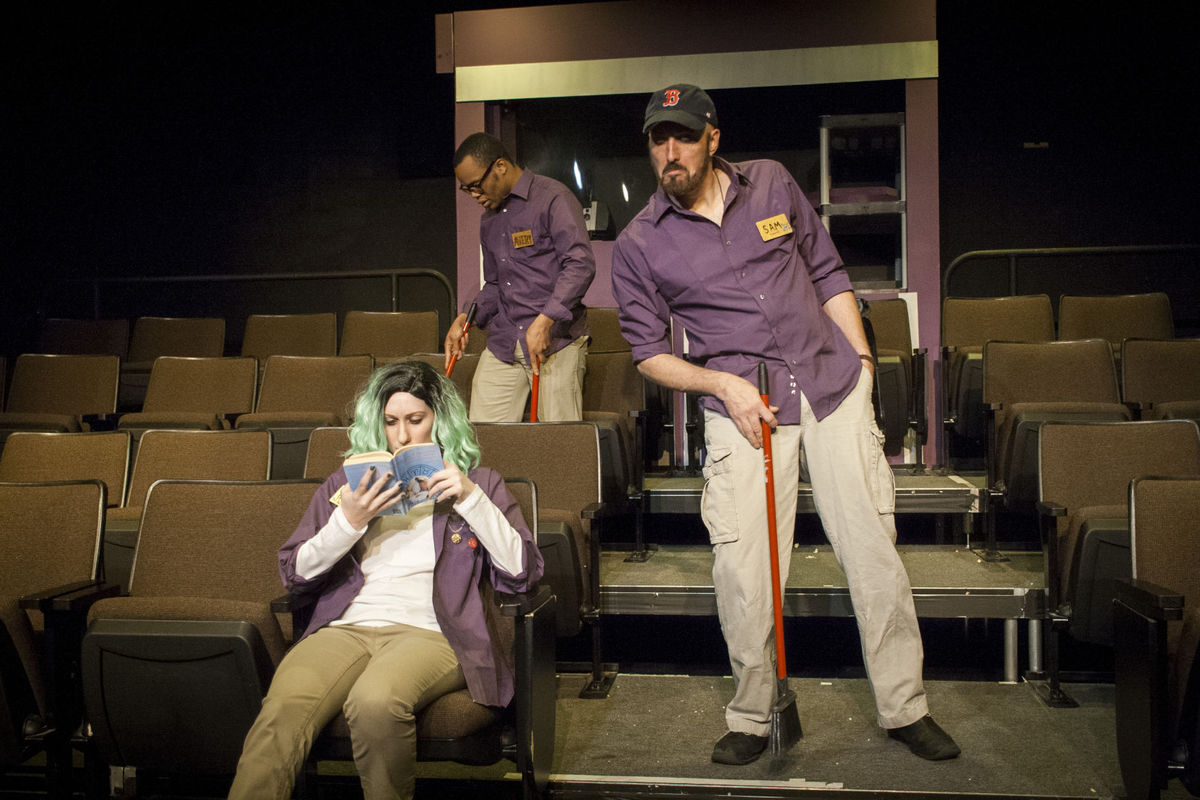 Millennials with existential leanings give The Flick authentic, heartfelt warmth

R-S Theatrics introduces audiences to the loyal employees of The Flick, an aging movie house that has yet to change over to all-digital projection. The story resonates with genuine performances and a script, by Annie Baker, thats witty and referential without pandering to clichés.

Stereotypical slackers Sam and Rose have been working there for some time, and new employee Avery is working while he takes a break from college to figure out his future. All three are a bit aimless at the moment, but for very different reasons. They likely wouldnt speak with or notice each other outside of work, but here theyre loyal compatriots with a sub-culture of their own. The beauty of The Flick is how well the characters weave their stories together, creating connections and conflict while pondering ideas that cross generations.

The three bored employees explore their malaise in a casual, almost offhanded way through conversations that are innocuously poignant and revelatory. Different topics are introduced with an air of indifference that immediately belies the doubts and insecurities the three share, quickly drawing the audience into their stories. The show has layers of tension, some of which may make some audiences members a bit uncomfortable, but all of which fit the characters and situation. Once the initial surprise passes, the awkward yet accurate performances shine.

Chuck Winnings Sam is the theaters resident sage. The oldest of the three, his life is stuck in neutral, a fact he seems resigned to begrudgingly accept. Winning expresses Sams dissatisfaction with passive-aggressive patter and an indifferent shrug that nonetheless reveals years of pent-up frustration. Sam needs a push to evolve, and Avery may just be the right man to kick start Sams change. This is some of the best work Ive seen from Winning, he really makes Sam a likable and poignantly flawed character.

Rose, played by Jeanelle Gilreath, has more urgency and a restless, selfish approach to life. She moves with a nervous energy thats constantly about to explode and she seems to delight in inflicting pain on herself and others. At least until she hits a nerve she never expected to find and is at loss as to her reaction. Gilreath gives the moment its deserved weight before self-consciously brushing off any meaning or suggestion of feeling. More action than words, its one of many lovely exchanges initiated by the talented actor.

Jaz Tuckers Avery is thoughtful and introverted, a depressed young man trying his best to engage. Avery is working at the theater because he loves the movies; hes also a bit naïve, a fact exploited by Rose and Sam. But Avery has the one quality the other two seem to lack  drive. Ambition. The sense that this job is a stepping point in his life, and that there are many possibilities still open to him. The fact that Avery is black and the other two are white is not lost on anyone; the way that fact twists and turns is quite satisfying. Tucker embraces Averys power in subtle but determined ways, leading to a pointed confrontation during the plays closing moments. With zero affectation, Tucker resolves the tension in an uplifting moment that demonstrates the actors ability to hone his natural charisma to the benefit of his characters.

The scenic, sound, and lighting design, by Keller Ryan, Mark Kelley, and Brittanie Gunn, respectively, with assistance from master electrician Tony Anselmo, expertly recreates the look and feel of a rundown movie theater. The design also cleverly mirrors the audience seating, creating a wonderful sense of recognition that sets the tone for the oddly compelling show. Scattered popcorn, fast food bags, and discarded soda cups can, at times, feel like metaphors for the embraceably human stories that drive the languid show. Then again, sometimes empty popcorn boxes and candy wrappers are just trash and maybe we shouldnt over think it.

The slow-moving story has a gentle, at times barely perceptible arc about change and self-discovery -- but its the contemporary characters and their conversations that charm and elicit sympathy. Theres quite a lot of humor in the on-going conversations as well as multiple movie references, including Sam trying to trip up Avery with an ongoing game of connect-the-actors. Personal revelations tumble out, self-examination uncovers shortcomings, and everyday philosophical conundrums lead to unexpected conflict in an emotionally layered show that isnt always tidy.

Bakers characters are contemporary and realistic, with uncertain and unremarkable but thoroughly human failings. Director Joe Hanrahan and the solid cast find realistic roots for their characters and create believable, easily recognizable, and imperfect individuals. The result is an enjoyable if dramatically unremarkable show that lures you in through characters that are both relatable and sympathetic. The Flick, in performance through December 23, is a completely engaging and enjoyable detour from your usual movie-theater fare that really entertains.