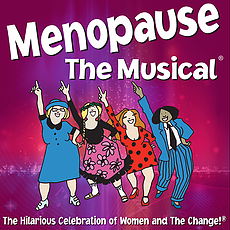 Filled with clever song parodies and short scenes that mine the problems women experience during the change of life for maximum humor, Menopause the Musical is, nonetheless, a high-energy, upbeat celebration of femininity. The premise is simple, four woman of a certain age meet in the lingerie department during Bloomingdale’s annual sale. Two of the women have a comic tug of war over a lacy bra, a third steps in to settle the disagreement, and soon the four are bonding over hot flashes, mood swings, weight gain, memory loss, and all the other trials of growing older.

The four women represent various walks of life and each faces their own mix of familiar symptoms. There’s the overworked and underpaid professional doing her best to keep cool physically and emotionally, played by Marty K. Casey. A mature soap opera star obsessing over diminishing roles and hot flashes, played with a flirtatious and knowing air by Lee Ann Mathews. An earth mother looking for her chi, played with a sense of barely controlled serenity by Laura Ackerman. And, finally, an Iowa homemaker hoping to put the spark back into her relationship with her husband, played with a sweetly cheerful tone by Rosemary Watts. The actors are long-time members of the producing company and the ensemble’s chemistry is as strong as their harmonies.

Each actor takes the lead on several songs selected to best emphasize the way menopause is affecting her life, and the associations work well. There’s plenty of comedy to mine in each character, but there’s also satisfying emotional and physical variety. Director Seth Greenleaf uses these differences to develop relatable, authentic characters who, though they come from very different backgrounds, are believable striking up a conversation on very personal matters with practical strangers. As the show continues the raised eyebrows and protestations of “not me” turn to agreement and laughter, creating a pleasant tone that permeates the intimate Playhouse theater.

As the women meander through the store, with frequent trips to the ladies room, they treat us to funny quips and pop songs from the late 1960s and 70s, with rewritten lyrics that cleverly emphasize the side effects of menopause. The musical doesn’t hold back, but the songs are never cruel, and the twisted lyrics are quite fun. “Chain of Fools” becomes the soulful lament “Change of Life” and Irving Berlin’s “Heat Wave” a tropical “Heat Flash,” while the Beach Boys’ “Good Vibrations” doesn’t get a change in lyrics so much as meaning and intention.

One drawback to the show is that it is beginning to feel dated around the edges. While certain songs transcend their era and remain fodder for parody, many of the songs in Menopause the Musical are less familiar and beginning to “show their age.” Playwright and lyrical satirist Jeanie Linder would be wise to consider a refresh, perhaps stretching her song selection into the 80s and 90s. Ageism, particularly towards women, is still an important subject and menopause still a natural occurrence for half the world’s population, so the topic is relevant. It’s the songs and dances that are beginning to lose currency.

The ensemble is clearly very comfortable with each other and the material, however, and their delivery entertains even when the source is unfamiliar. The actors also create an instant rapport that extends to the audience, and they revel in playing to and with the crowd. Matthews sees a man in the audience who interests her and immediately becomes a coquette, directing lines to him throughout the show. Casey and Watts are expert at delivering eye rolls, shoulder shrugs, and double takes directly to the seats with perfect timing. Ackerman beams and shakes her head at the audience with equal grace, and, as with a favorite teacher or boss, you hope she bestows her unspoken praise on you.

That sense of camaraderie feels genuine and warm and continues throughout the show. The women have a great time with each other, particularly in the scenes where they’re shopping – trying on wigs, sunglasses, and accessories that visually complement the next song. The light choreography is cute and has a spontaneous feel that’s infectious, Matthews' brief Cher impersonation is delightfully on but too short, and Casey’s Tina Turner is vocally crisp and humorous, if short by a different definition.

Menopause the Musical, running through March 31 at the Playhouse at Westport, offers a lighthearted look at an often-difficult life transition. The show emphasizes the positives and encourages women to talk with each other, to reach out in support when you see a woman who could use a hand or a smile, even if you don’t know her. The performances are solid and engaging, if a bit routine, ensuring 90 or so minutes of fast-paced musical comedy that’s appealing enough to entertain women of all ages and give the men who love them a few laughs as well.