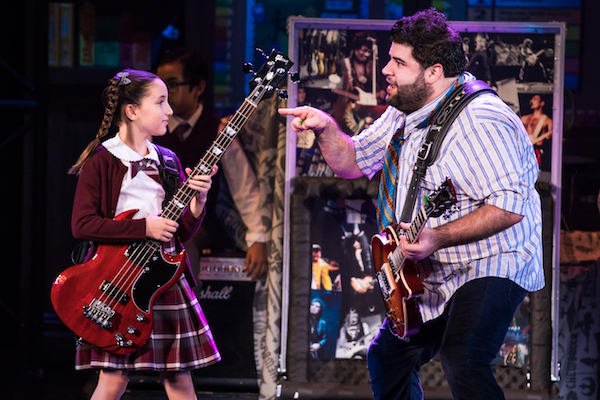 Using a beloved family film as source material for a Broadway musical can be a gamble. In the case of "School of Rock," it's one that mostly pays off. Based on the hit 2003 movie staring Jack Black, "School of Rock - The Musical" blends songs from the film with a new original score by legendary Broadway composer Andrew Lloyd Webber, lyrics by Glenn Slater and book by "Downton Abbey" creator Julian Fellowes.

"School of Rock" tells the tale of failed rocker Dewey Finn, delightfully portrayed by Rob Colletti, who has been booted out of his band and is about to be booted out of the apartment he shares with his best friend and former band mate Ned Schneebly and his uptight girlfriend, Patty, for not paying rent and generally being a lazy bum.

All Dewey dreams of is competing in and winning the local Battle of the Bands, but he just can't seem to get it together. When a job call comes in for Ned, a substitute teacher, from the prestigious Horace Green prep school, Dewey, desperate for cash, accepts the gig, posing as his friend even though he has no experience and no business teaching kids.

After witnessing a classical music lesson given to his class by tightly-wound school principal Rosalie Mullins (played to perfection by Lexie Dorsett Sharp), Dewey realizes the potential of the young musicians and sets to work at turning his class into the rock band he always dreamed of with a plan to win the Battle of the Bands.

Before the curtain rises on this show, the audience hears a brief voiceover message from Andrew Lloyd Webber himself. He states that people frequently ask if the kids in the show are actually playing their instruments live onstage, and that the answer is an "emphatic YES." While Colletti as Dewey makes a great lead, channeling all of the goofiness and affability of Jack Black in the film, the kids are the real rock stars of this show.

With Colletti and Sharp building the set-up early in the first act, the show feels like it really takes off with the seminal number "You're in the Band," during which the kids take hold of their instruments for the first time and their talent becomes fully visible. Being cast in a Broadway touring production, they can obviously all sing and dance; but watching them play their instruments with all of the ferocity of a grown-up rock band is a delight.

The standout is adorable Phoenix Schuman as misunderstood Zack, who shreds the electric guitar like he was born to do it. He has, in fact, played since he was eight. Sassy Theodora Silverman as Katie puts on a perfect rock pout as she slaps the bass guitar that's nearly as big as she is. Theo Mitchell Penner, a pianist since age five, slays the keyboard as nerdy, self-conscious Lawrence; and multi-instrumentalist Gilberto Moretti-Hamilton rocks out on the drums.

With wealthy, pressuring parents who fail to listen to what their kids really want or who they really are, the students gravitate to Dewey's less-than-structured teaching methods and begin to loosen up, embrace their talents and believe in themselves, even when they discover that he's deceived them. He also uses the power of rock to get Miss Mullins to let her hair down and remember the freewheeling music fan she was in her youth.

Like the film, the show culminates in an epic performance of Zack's song "School of Rock" at the Battle of the Bands, which ultimately wins over the perturbed parents and Principal Mullins. Colletti and the kids have great on-stage chemistry, and the finale is where it really shines.

Most of the original songs written for the show are primarily vehicles for telling the story and not entirely memorable on their own, with the exception of anthem "Stick it to the Man," which is repeated in Act I and encored at the end of the show.

Choreography by JoAnn M. Hunter keeps the classroom numbers lively and fun, while dynamic set and costume design by Anna Louizos help bring the production to life. Sliding wall pieces easily move and flip to alternate between the halls and classrooms of Horace Green, Dewey's apartment and the Battle of the Bands stage.

While it may not go down in the cannon of all-time-great Andrew Lloyd Weber musicals, "School of Rock" is a fun and entertaining show the entire family can enjoy together, from young kids to grandparents, and a great opportunity to expose the youngest fans to the joy of Broadway musicals.

"School of Rock" runs at the Fabulous Fox Theatre through January 28.