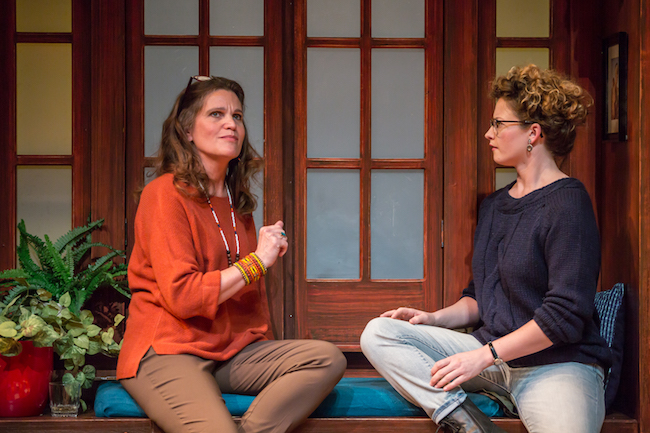 The New Jewish Theatre explores the politics of science and gender in The How and the Why, stirring in ambition and personal revelations to keep the audience captivated. The subject matter is dense and constantly shifting, but solid direction by Nancy Bell and fantastic performances by Amy Loui and Sophia Brown hold your attention while keeping the production grounded in reality.

Zelda Kahn is an evolutionary biologist with a long and distinguished career in a field typically dominated by men. Rachel Hardeman is a graduate student in the same field who recently submitted to but was rejected for a speaking slot at an important scientific conference where Kahn is on the board. Although the two are pursuing the same field, Hardeman initially reached out to Kahn two weeks prior to their meeting for a completely different reason. One filled with uncertainty and tension of its own.

The description sounds straightforward if more scientific than most plays, but the script is filled with interesting twists, intellectual and emotional confrontations, and thought-provoking ideas. Both women are a bit awkward initially, an indication that neither is really certain how to begin the conversation now that they are face-to-face. The sense of uncertainty is palpable even as they discuss their studies in evolutionary biology, a subject that turns out not to be as safe or easy as it seems. The intensity mounts as they dig into a discussion about Kahn’s groundbreaking work and Hardeman’s theory, with the subject inevitably turning to the woman’s common but not shared history.

Loui ensures that Kahn resonates as a woman who has chosen her career above all else without losing her heart or sense of compassion. Her choice is reflected in her studious approach and scholarly office – she’s dug in so deep she doesn’t initially hear Hardeman enter the room. A brilliant scientist, she is also quite clearly a teacher and a champion of students and their discoveries. Though Hardeman is not her student, Kahn recognizes that she has developed a theory of considerable merit and is determined to support the work if the grad student will let her. Loui reveals the choices and sacrifices Kahn has made with a firm but graceful touch.

Brown’s Hardeman is full of intellectual fire and drive, but also unwilling to sacrifice her personal desires to academia. Somewhat socially inept, Hardeman is brash and overconfident at times, leading to uncertainty and a tendency to break down too easily when challenged. She needs Kahn on so many levels, but she stubbornly tries to refute Kahn’s advances and remains skeptical of the older woman’s motivations, demanding that Kahn both defend and prove herself multiple times. Often impatiently dismissive, whether waiting for an answer or when responding to the observation that she’s beautiful, Hardeman deflects Kahn repeatedly, but the older, wiser academic knows the hurdles Hardeman faces and persists. The two talented actors fill these characters with natural complexity making their slowly developing relationship and admiration all the more satisfying.

Peter and Margery Speck create two well-appointed settings for the show, Kahn’s very professorial office and a run-down bar, presumably near the college campus. The lighting, sound, and costume designs, by Michael Sullivan, Zoe Sullivan, and Felia Davenport, respectively, define the tone and enhance the story and characters without intrusion. Director Bell and the actors bring the spaces to life, with well-motivated characters that look and behave realistically. Loui is casually sleek and effortlessly put together and Brown wears the student uniform of boots, jeans, and a flannel shirt, her hair piled on her head without thought, both of them channeling all their intensity and focus into their work rather than their looks.

The situation and dialogue in The How and the Why, running through February 11, is riveting and filled with interesting ideas that come across as both real science and contemporarily relevant. The connections, commonalities, and coincidences in Sarah Treem's script are sometimes too convenient, but it’s the authentically human performances by Loui and Brown, so deeply layered and beautifully flawed, that ensure the play is a compelling production. Filled with academic pursuits and genuine emotion, the one act play thoroughly engages and may leave you pondering the “how and why” as well.