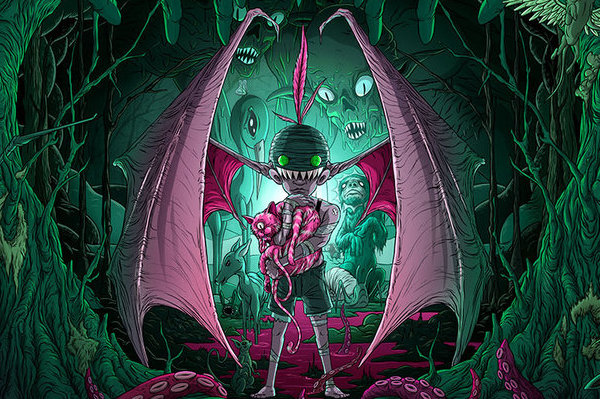 For all of the putative inscrutability of his lyrics, the origami-like assembly of his rhymes, and the dense, otherworldly terrain of his beats, it's often just as easy to be hit by a kind of radical honesty in the music of Aesop Rock. If the vagaries and idiosyncrasies of language are--to borrow a famous line from George Herriman's Krazy Kat--the means by which we misunderstand each other, then Aesop's verbal excess is an expression of this very frustration. Part of his appeal, perhaps, is the way in which he breathlessly, almost unstoppably seeks to articulate a truth beyond that which we accept as real. If everyday language is insufficient to the task--debased and abused by those in power, those who claim to have "the best words"--then Aesop articulates a willful, insouciant intelligence. Swathed in alchemical metaphor and all-over-the-place allusion, his music is at once urgent and deeply personal.

Well, like anything, it can be. Aesop's game is one of patience, of time. He now notoriously has the widest vocabulary in hip-hop, and the prodigiousness with which he deploys it can be daunting at first. But linger over Aesop's lines and they soon only seem too smart, only appear too protracted. The examples are too many to list here; the exegesis of even one too much work for one review. The more you look, though, you find that heartfelt, brutally candid sentiments are not the exception, but the rule. Aesop runs a revolutionary argot--one that requires work, rewards repetition, but above all sounds dope.

There is something satisfying and immediate in his work, especially live. If the only real appeal of Aesop Rock was the promise of waiting around and wading through, then the audience for his show would only be would-be scholars like me--bespectacled and multi-degreed, with more than one dictionary in the bookmarks bar of their browser. Instead, the show was packed with a legion of young people whose attention never waned as Aesop plowed track-by-track through most of his newest album, The Impossible Kid, at Delmar Hall on Tuesday. Through a series of tracts, vignettes, and meditations, the Aesop of The Impossible Kid benefits from a unique topographical vantage--the summit of the hill of being over-the-hill. (Aesop noted at the beginning of his set that he turned 40 on this tour.) No one is immune from the feeling of getting old, but Aesop seems to have reached a signal moment in both his life and career. More than ever, we find him taking stock of his history to date--the benign regret of an artistic path not taken ("Rings"); a kind of "kids these days" incredulity over weird tattoos ("Lotta Years"); the acute loss of self that attends the loss of a loved one ("Get Out of the Car," which was the only Impossible track that he performed outside of the album's sequence, saving it for the end of his set).

And yet, for someone who is openly aging (or rather, aging openly, since there can be a big difference), Aesop's flow hasn't suffered; even his trickiest verbal mousetraps were clear, almost conversational, in the live delivery. Pacing the stage with unapologetic enjoyment, Aesop smiled and sauntered for nearly thirty songs, including a few Hail Mary Mallon cuts (his collaboration with Rob Sonic, who also backed him for the entire set) and a handful of classic crowd-pleasers like "No Regrets" and "Daylight." For an encore, Aesop was joined by opener Homeboy Sandman for three songs from their recent Lice Two: Still Buggin' EP. But I was honestly a little bummed that they didn't include the Emily-Post-meets-urban-dictionary track "Katz" from the first installment of Lice, with its killer Emerson, Lake, and Palmer sample and surprisingly deft advice ("Cats had better learn to recognize the po in plain clothes / Cats had better not graduate to what they hate most / Cats had better shout 'i-ight' when Doug E. flip the 'ay-o'").

Amid a throng of throng of fans who were often desperately trying (and failing) to rap along with one of their favorite rappers, I wasn't necessarily moved or touched in the same way that certain lines really get to me when I'm alone and least expecting it. I actually spent an unusual amount of time at the show being impressed by the otherwise immaterial name of the tour itself. This was the Kirby Tour, a shout-out to Aesop's kitten, whom we can imagine is back at home in Aesop's adopted city of Portland--chewing up earbuds, napping on the toaster, and generally causing the kind of mischief chronicled on the Impossible track "Kirby." (And also let's just take a moment here to give Aesop credit for filling the void that David Sedaris lamented in his essay "The Youth in Asia," which at one point wonders poignantly "why so few songs were written about cats.")

At the end of the show, the line for the merch table stretched to resemble that of a Russian bakery in a Cold War newsreel, and I saw a guy winding through the crowd who looked, to me, a lot like Aesop Rock. Beard, baseball cap, unkempt-ish. Turns out it actually was Aesop Rock. I think that his very everydayness--ability to blend in, his good-but-not-too-good lookingness--is the tails to his head, so to speak. It comes through especially in interviews, especially, just what a "person" he is. Private but not secretive; anxious but not inert; super-smart but not at all superior.