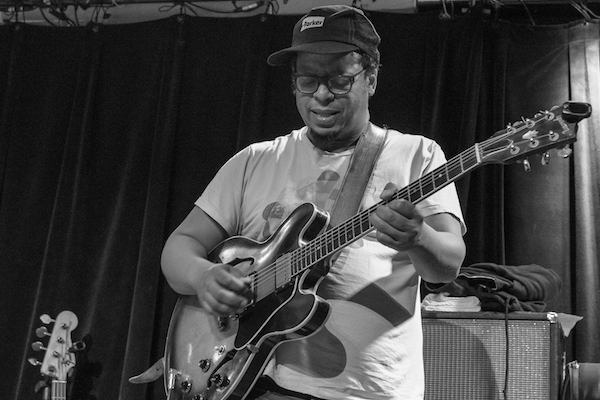 Losing Track of Time with Tortoise at the Old Rock House

Tortoise is a band to whom I have listened for what feels like forever, although I have done so in fits and starts. First I made enthusiastic, frequent-enough attempts to immerse myself in their catalogue, to let it wash over me for a week or so at a time, beach-like, with the hope of returning to the real world like someone back from vacation with shells braided into their hair, eager to both invite and answer questions. Then, alternately, years will go by during which I only listen to the 1998 album TNT on a biannual basis for some truly random reasons, like a New Yorker article will mention H.L. Mencken, reminding me of the song "In Sarah, Mencken, Christ, and Beethoven There Were Women and Men."

Over this nearly twenty-year period of well-meaning interest followed by semi-forgetfulness, I have come to think about Tortoise in the same way that I regard the US Senate. They are an institution--one for which I'm grateful and to which I grant a deep respect, even when I can't say that I love everything they've done nor that I know a whole lot about most of the members. Even so, I have somehow failed to ever see Tortoise play live. Thus, for the purposes of this review, I have nothing against which to compare them, performance-wise, despite their quarter-century career, and I'm also going to be somewhere between shaky and flaky when it comes to song titles.

The concert was part of the Art of Live Festival which took place throughout the weekend at the Old Rock House, the Ready Room, and Off Broadway. On Thursday night, with an ice storm waiting in the wings, the St. Louis three-piece Hope & Therapy opened the show at the Old Rock House, constructing a scaffold of tight, angular rhythms over which the voice of singer and keyboardist Hope Gaines ascended to almost Icarus-level heights. Gaines demonstrated a compelling confidence and poise, but there were an equal number of moments when the sheer sonic quality of her singing was almost too pure and ultimately at odds with the kind of mutual identification that I'm looking for in a live performance: a shared sense that we're here, together, because it fills some kind of lack, absence, or deficiency; that we come together not as masters, but as misfits.

Tortoise, too, risked being too good, especially given the heightened sense of focus and restraint on last year's album The Catastrophist, from which they drew liberally for their set. Throughout the night, I found myself impressed with them in the same way that I am when I see a time-lapse video of a car being built in a factory. I marveled at the efficiency with which their complex tonal landscapes took shape--at musical relationships so refined and skills so in sync that no member ever seemed to look to another for a cue or a count.

At the same time, perhaps precisely because Tortoise operates within no established genre or movement, a sense of uncertainty may always be at the core of my relationship to them. Even on those tracks into which they seem absolutely locked, the fact that their rules are solely their own allows room for anything to happen. This was the case with the synth-heavy "Gesceap," a standout from The Catastrophist and one of at least a few songs on the album that remind me of Sonic the Hedgehog in the best possible way. That Tortoise's performance was less like an off-the-rails adventure and more like a guided tour was to their credit. For artists to whom an audience would give a hall pass for going rogue without a moment's hesitation, the band's willingness to play it cool and stick to the script is a testament to the script itself. Their career-spanning set felt neither forced, flat or fan-service. Rather, the seamlessness with which the songs interlocked recalled to me again the idea of a manufacturing infrastructure or better yet a kind of supply chain--one which they've developed over time and which needs only minimal maintenance. (The Castrophist, for example, came after a nearly seven-year gap between albums.)

I worry that so much imagery of industry and automation here implies that Tortoise came across as mechanical, or that they weren't playing music so much as plying a trade. That was not at all the case. I found myself unexpectedly swaying to the music, giving way to it. I lost track of time without ever forgetting it was there. For five almost exorbitantly skilled musicians--switching between instrument duties, frequently deploying two drum kits, engaging as many machines as you could imagine onstage--they remained deeply committed to the audience, listening as much to each other as they did to our own rapt silence.

Click below to see more of Doug Tull's photos of the evening's performances. 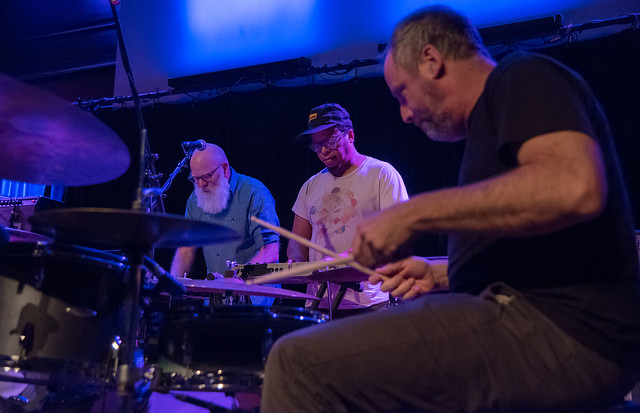