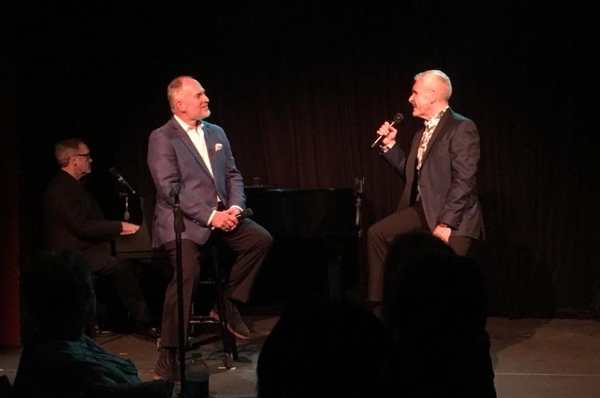 Review: Old friends come together for a charming new cabaret

"What do you say, old friend, are we or are we unique?" So runs the lyric of Sondheim's "Old Friend," the song that, in combination with Simon and Garfunkel's "Old Friends," served as the opening number in "A Fine Bromance," the new show by Bob Wetzel and Craig Becker presented by Mariposa Artists July 13th.

It was a perfect choice because, while their decades-long friendship may not be unique it is, at least, rare. And it informed every minute of this unfailingly charming evening.

That opening number was just a bit deceptive in that it began with the two singers seated with their backs to each other, dimly lit, as they wistfully sang Simon and Garfunkel's melancholy lines ("Old friends, winter companions, the old men / Lost in their overcoats, waiting for the sun"). But then they turned face to face, the lights brightened and the tempo quickened. They smiled as if reconnecting for the first time in years and launched into a breezy run through the Sondheim.

That set a celebratory tone the show maintained to the end, with just the right number of ballads for contrast.

Indeed, under the knowing direction of Lina Koutrakos, a cabaret legend in her own right, Mr. Wetzel and Mr. Becker assembled an exceptionally well-balanced mix of show tunes old and new, some Great American Songbook standards, and even pop classics like James Taylor's "The Secret of Life," a thoughtful performance of which brought the show to a close. Each selection was carefully tailored to the strengths of its respective performer by the evening's music director and pianist, the infallibly creative Rick Jensen. The result was an example of what a well-turned-out cabaret evening should be.

Messers Wetzel and Becker provided a nice balance of performing styles as well. Mr. Wetzel was the "old smoothie" of the duo, delivering standards like "Moonlight in Vermont" with suave assurance. Mr. Becker, in contrast, proved a dab hand at lyric-heavy comedy numbers like Kander and Ebb's "Coffee in a Cardboard Cup" and Maltby and Shire's trenchant commentary on breaking up, "You Want to be My Friend?" When they sang together, whether on self-deprecatingly funny numbers like Jerry Herman' s "Elegance" or on easy-going standards like Simon and Garfunkel's "59th Street Bridge Song," they had the cozy camaraderie that comes from long acquaintance.

In fact that lifelong friendship, during which Mr. Wetzel and Mr. Becker have managed to combine successful careers in the business world with after-hours lives as actors and singers, was the main theme of "A Fine Bromance." The biographical details sprinkled throughout the show were just substantial enough to provide a narrative thread without ever deteriorating into the cabaret equivalent of home movies.

Their stories also allowed them to personalize their songs and make the lyrics their own. Mr. Becker preceded his high-wattage performance of Sondheim's "Everybody Says Don't," for example, by talking about how, as a young man, he decided to take a life path different than the one he was expected to follow. It turned a song about challenging authority into a kind of personal declaration of independence. In the same vein, Mr. Wetzel put a personal spin on his rendition of "Luck Be a Lady" by talking about how important luck has been in his life.

"A Fine Bromance" had only one performance at the Kranzberg Center here in St. Louis, but New York cabaret lovers will be able to see it at Don't Tell Mama on September 30th; visit their web site for more information. For upcoming Mariposa Artists shows, visit their Facebook page.