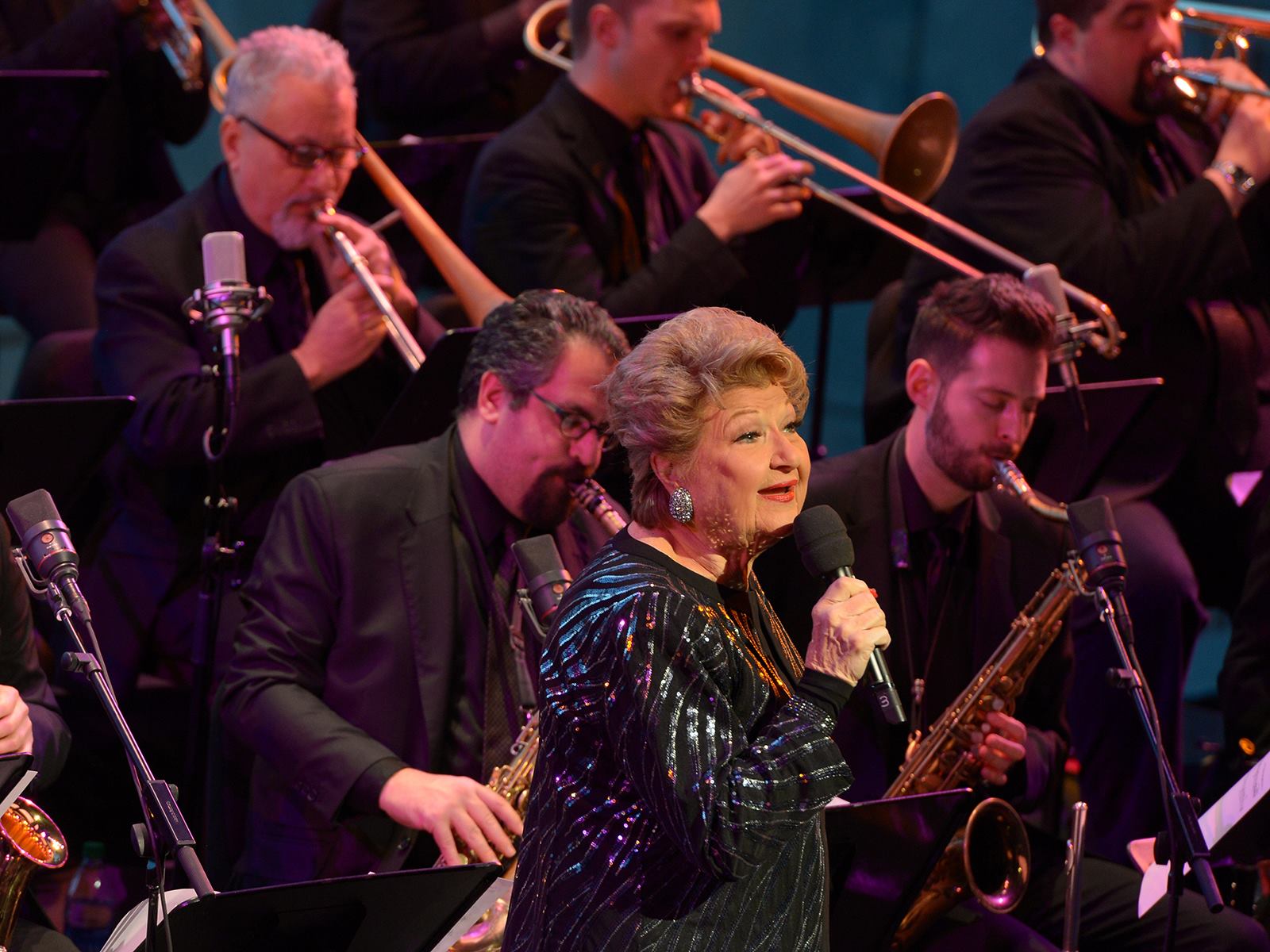 Marilyn Maye proves it's better with a big band

If you're already a fan of cabaret legend Marilyn Maye, you won't be surprised to learn that she and her long-time pianist/music director Tedd Firth rocked the house last night (March 7, 2019) at Jazz St. Louis, as part of an ongoing series of concerts co-produced with The Cabaret Project. And if you weren't a fan, you likely became one by the time the show was over.

Ms. Maye usually travels with a small combo consisting of Mr. Firth on piano, Rod Fleeman on guitar, Gerald Spaits on bass, and Todd Strait on drums. For this show, "It's Better With a Big Band," the group was supplemented by the winds and brass of the Jazz St. Louis Big Band, and the impact of that extra power made Ms. May's already strong performance that much more impressive. It was also a pleasure to hear some of our local pros strut their stuff.

From the moment she hit the stage with an upbeat "love" medley ("What the World Needs Now is Love," "Let There Be Love," and the Sarah Vaughan hit "It's Love"), Ms. Maye used her commanding performance presence and vocal virtuosity to immediately connect with the audience--a bond she unfailingly maintained right through her encore of Jerry Herman's "It's Today" over ninety minutes later. I think she might have made eye contact with every audience member at some point during the evening.

Her boundless energy, good humor, and obvious delight in her material are, in short, irresistible.

These days Ms. Maye's shows appear to concentrate on elaborate and smartly assembled medleys of numbers from Broadway and the Great American Songbook, and this one was no exception. Highlights included a five-song set of numbers with lyrics by Johnny Mercer ("He knew how to put the right word on the right note," Ms. May observed), a set of four tunes from Lerner and Lowe's hit "My Fair Lady," and a collection by one of my all-time favorites, Thomas "Fats" Waller, that included a sly, seductive version of "Honeysuckle Rose."

That's not to say there weren't a few lovely ballads along the way as well. I was especially taken with "Fifty Percent," from the musical "Ballroom," with its beautiful take on love late in life, and with the medley that combined the Frank Sinatra hit "Here's That Rainy Day" (Johnny Carson's favorite song, according to Ms. Maye) with Harold Arlen's classic "Stormy Weather." That one segued into a dynamite rendition of Arlen's "Come Rain or Come Shine" with a killer piano solo from Mr. Firth.

I could go on, but you get the idea. As an added bonus for the local audience, 18-year-old Caden Turner, a graduate of The Cabaret Project's Sing Center Stage program, was welcomed to the stage for a swinging, Sinatra-inspired performance of "Come Fly With Me."

The term "living legend" can be overused, but Ms. Maye (who turns 91 in April) surely deserves the appellation. Following one of her 76 appearances on The Tonight Show (the all-time record for a singer), Johnny Carson turned to the audience and said "that, young singers, is the way it's done." As she proved once again with this latest visit to St. Louis, that's still the way it's done.

Astonishingly, Marilyn Maye took a 5 am flight the following day to San Francisco for a two-night gig at the Nikko Hotel, after which she's off to The Purple Room in Palm Springs. You can keep up with her busy schedule at her web site.