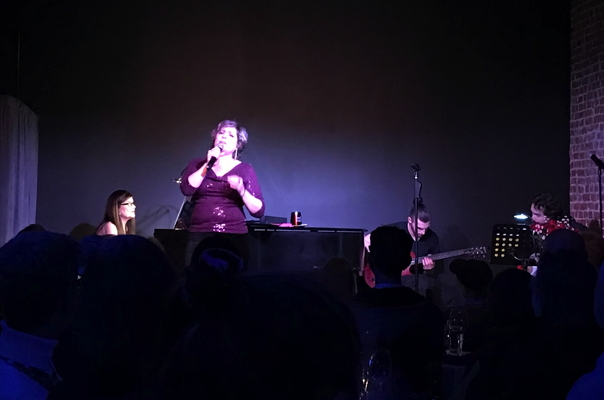 "Some people come into our lives, leave footprints on our hearts, and we are never the same." The quote is usually attributed to composer Franz Schubert, but it could just as well have been the theme for Anna Blair's new cabaret show "Always...Anna Blair" at the Blue Strawberry Thursday night (January 16).

Ms. Blair has been appearing for many years as a Patsy Cline impersonator as well as an independent actor/singer, so it's not surprising that songs associated with the late country star figured prominently in her show. But, as Ms. Blair noted, this wasn't an impersonation evening. "Tonight," she declared, "I want to sing her songs the way that I want to sing them." That meant using her own voice, which remains a strong instrument with an impressive tessitura that served the material well.

Ms. Blair's appealing stage presence and strong sense of humor served the music well also. A lot of Cline's hits are about the footprints on the heart being made by hobnail boots, which could get cloyingly sentimental without the wry sensibility Ms. Blair brought to them.

Perhaps the best example of that was a version of Willie Nelson's "Crazy" with new lyrics by Ms. Blair and her director Dan Kelly. It turned that weepy lament of unrequited love into a hilariously snarky commentary on that subspecies of American man who suddenly reverts to the age of 15 when he hits age 50 ("You're crazy / Crazy for buying that sports car").

I was also much taken with a revision of Stanley Lebowski and Herb Newman's "The Wayward Wind" (a No. 1 hit for Gogi Grant in 1956) that changed the sex of the character "born to wander" from male to female, so that "I'm now alone with a broken heart" became "he's now alone with a broken heart." That made it a song about both female empowerment and a reflection of Ms. Blair's love of travel. "Not all who wander are lost," she reminded us in her introductory patter.

There were also country classics that were just great fun all on their own. Ms. Blair opened the show with one of them: V.F. Stewart's bouncy "Come On In," sung as Ms. Blair entered from the back of the house, bidding a cheerful hello to the audience as she made her way to the stage. Howard Greenfield and Neil Sedaka's "Stupid Cupid" (sung by Cline on stage but not issued on records until after her premature death in 1963 at the age of 30) got a spirited comic treatment that offered a nice contrast to (in Ms. Blair's words) "the 'love is not fair' part of the show."

That's not to say that we didn't get the requisite number of "he cut out my heart and stomped on it" numbers, but Ms. Blair's heartfelt delivery and obvious emotional connection to the lyrics prevented them from becoming maudlin. In fact, old-fashioned weepers like "Sweet Dreams" (a big hit for songwriter Don Gibson in 1955 and later for Patsy Cline) and Hank Cochran and Harlan Howard's "I Fall to Pieces" (Cline's first No. 1 hit on the Country charts) felt more moving to me in Ms. Blair's performances than the original versions ever did.

Maybe that's just because I have never been a country music fan. Or maybe it's because Ms. Blair's voice and acting skills just make them mesmerizing.

I'd also like to put in a few words about Ms. Blair's excellent use of patter, those small monologs that performers use to set up their songs. While Ms. Blair was up front about the autobiographical intent of some of her song choices, she did so in ways that touched lightly on her own rich life experience without giving the audience too much information. She consistently gave us just enough background to make her subtext clear without putting big flashing lights on it. Singers doing a "this is my life" cabaret far too often fall into that trap. She didn't even come close to it.

Bottom line: I don't even like Patsy Cline that much, but I really enjoyed this sweet, funny, and touching evening, as did the capacity crowd. Ms. Blair has been an important figure on the local theatre scene for many years now, and a raft of familiar performers (and even a few of my fellow critics) showed up to join the rest of the audience in welcoming her long overdue return to the cabaret stage.

I have known Ms. Blair for quite some time myself, going back to when we both appeared in a production of the musical "Smoke on the Mountain" a couple of decades ago, but it was pretty clear from the audience response that you didn't need to know her to love her latest show.

"Always...Anna Blair" played the Blue Strawberry on January 16th. Information on upcoming shows at The Blue Strawberry, St. Louis's only dedicated bar/restaurant/cabaret showroom, is available at their web site.