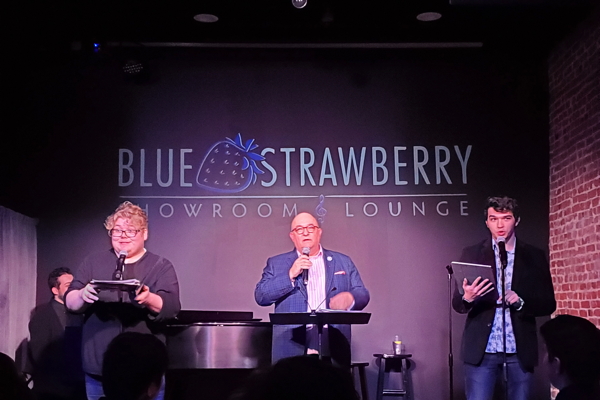 From the moment, Dr. Jeffrey Carter stepped on stage and smiled his charming smile at the audience, we all knew we were in for a delightful evening of stories and melodies in "Songs I WISH Mother Had Taught Me", Tuesday, February 25 at the Blue Strawberry. He sang a plethora of standards, show tunes and some contemporary songs destined to be standards.

Dr. Carter connected immediately with the audience, filled with friends and supporters from all areas of his life -- students and colleagues from Webster University, where he is a Professor and Chair of the Department of Music, from Circus Harmony where he works as Musical Director (his "side hustle") and private life (his sister came all the way from Kansas City to see his show.) As a musician himself who not only sings but also plays the piano, organ, French horn, harmonica and owns an accordion, he "could be my own band!" Fortunately, he didn't have to play any instruments for himself as he was accompanied by the extremely talented Nic Valdez.

"Songs I WISH Mother Had Taught Me" was divided into 5 periods from Dr. Carter's life. Expressive stories about being a kid began with Cy Coleman's "To Be a Performer", followed by our introduction to his mother, (the first woman in his life), a Baptist Missionary who couldn't sing and once told Dr. Carter, "I gave all my musical talent to you." His delightful foray into childhood took us way back with Pete Seeger's "Be Kind to Your Parents" and "Accentuate the Positive". We learned to make our own kick-ass party with composers Marcy Heisler and Zina Goldrich and Adam Gwon and I loved Dr. Carter's jazzy, fun rendition of the Hokey Pokey where he told of the second woman in his life (his prom date) and the awkwardness that comes with that whole situation. His self-deprecating humor was evident throughout the show. He stated, "Second rate stand-up, third rate singing." Not even close!

The songs he wished his mother had taught him seemed to include songs from movies he and his mother saw or had that old-timey feel to them. Michel LeGrand's "I Will Wait for You" from "The Umbrellas of Cherbourg", "Look for the Silver Lining" which Judy Garland sang in "Till the Clouds Roll By" and Peter Mills' "To Beat the Band" ran the gamut of moods from sad and thoughtful to bright and fun.

Apparently, Dr. Carter had some formidable women playing crucial roles in his upbringing. The third woman in his life was his piano teacher, Gladys Alkire, "a force to be reckoned with." Hearing him tell of his lessons being exactly 27 minutes long and her returning after 3 minutes with a strange smell on her breath was hysterical! She needed "two puffs and a nip of Crown to hide the cigarette smell just to face the kids." But it was clear that she helped young Jeffrey respect the music and the instrument when he sang "I Love a Piano".

Dr. Carter then transitioned into the "Getting Older" and "Looking for Love" acts of his show with lovely interpretations of Kurt Weill's "September Song", "Mama, a Rainbow" (one of my personal favorite show tunes that hardly anyone knows!) from "Minnie's Boys". He told of his first experience of witnessing drag with dozens of drag queens singing "Que Sera Sera". Mr. Valdez displayed throughout what an accomplished pianist and musical arranger he is. Next followed a Fosse-inspired, sexy "Bye, Bye, Blackbird". Clearly, the audience was blessed to see these two very talented musicians collaborating so successfully. I must admit though that I kept imagining Dr. Carter singing this song with jazz hands and dressed in a black unitard!

Nic Valdez also got to show off his beautifully smooth singing voice in a duet of "Pretty Women" from "Sweeney Todd". Dr. Carter did rely on his book a lot but since he included a "getting older" section most of us in the audience understood. And even when he turned a page too many and lost his place, he's so gosh-darn charming, no one minded a bit. "Remembering You" and Gershwin's "The Man I Love" were haunting and sad yet somewhat hopeful. Two of Dr. Carter's students (Caleb McCarroll and Noah Lovins) took to the stage with him and sang "Art of the Ground Round, parts 2 and 3" from "Curmudgenly Canons" by P.D.Q. Bach. These songs had us rolling in the aisles and also showed Dr. Carter's adeptness as a professor of music.

He returned once again to the canon of Heisler and Goldrich for the "Bring it Home" act with "Welcome the Rain", a beautiful song with wonderful lyrics that I, myself, will be learning and singing soon and Kander and Ebb's "Sing Happy". Dr. Carter encored the show with "And I Was Beautiful", a song from one of my favorite Jerry Herman shows, "Dear World".

If you can't tell by now, I really enjoyed this gorgeous show filled to the brim with unique and interesting songs and stories performed by very gifted musicians. And, I was not alone in my appreciation. Dr. Carter's joy of singing and connection with the songs filled me and the rest of the audience with warm fuzzies and smiles.

For Information on upcoming shows at The Blue Strawberry, St. Louis's only dedicated bar/restaurant/cabaret showroom, is available at their web site.