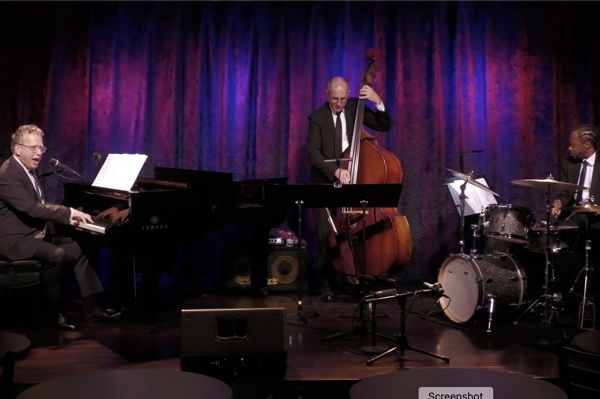 In these challenging times, I often wish I could escape to a movie, see a play, or enjoy a live music performance. St Louis has a rich history of performing arts and artists. Sadly, we will probably not see these venues fully opened for some time, due to the pandemic we are living through. However, the good news is, virtual performances are not only a viable possibility, but they are also becoming increasingly popular among performing arts fans.

One of St Louis’ finest arts organization has answered the call. The Cabaret Project of St Louis under Executive Director Tim Schall has, for years, curated the best cabaret acts from around the world and brought them to St Louis to tremendous success and audience raves. By early 2020, all performance venues in town had been shut down, so The Cabaret Project brilliantly transitioned to virtual performances.

I must admit, I had my doubts about this method of experiencing art, but all that changed when I had the pleasure of seeing and hearing Billy Stritch’s virtual homage to Mel Tormé. It was no less than faith-restoring. I had the feeling of being in an intimate cabaret space, not sitting in a desk chair watching my computer screen. Everything about it was as close to perfection as live music can be. Nothing is lost in the performance. As a matter of fact, I was rather pleased to hear the concert without the interference of other sounds like waiters taking orders, glasses clinking, street traffic or audience chatter.

The star of the show, Billy Stritch, is a renowned artist in the theater and musical world as a composer, arranger, vocalist as well as musical director and accompanist for Liza Minelli. As the pianist and vocalist of his tribute to Mel Torme, he is without flaw. This seasoned veteran plays and sings masterfully with versatility and absolute certainty. He owns the room, and he knows it! He is not attempting an impersonation. Instead, he channels the spirit of Torme, with all the nuance, dynamics and mastery of the Velvet Fog, himself.

Billy is silky smooth, whether singing a ballad or scatting a jazz number. His trio made up of himself, Tom Hubbard on bass and Mark McLean on drums, play as if they have been together forever. The sound was so lush and elegant I would enjoy listening to them, even without Billy’s superb vocals, but the three together make musical magic.

Mr. Stritch performed some of Mel’s most well-known recordings like “It Was Just One Of Those Things,” “Sunday in New York,” “Haven’t We Met?,” “Mountain Greenery,” “Blue Moon” and one of my personal favorites, “A Nightingale Sang in Berkley Square.”

Between his glorious crooning and finger-snapping scat, he shared the most interesting details about Torme’s life and music. Did you know Mel Tormé began his singing career at age 1, and made his first radio appearance at age 5? I did not.

I consider myself quite fortunate to have watched this extraordinary tribute concert on January 23rd. Fortunately, if you missed it, there is still one more chance to catch Billy Stritch’s Tribute to Mel Tormé. If you crave an evening of marvelous musical entertainment, free of commercials or interruptions, you can catch the next showing on January 30th at 7:30 p.m. You can purchase tickets by going to  e.givesmart.com/events/jjh/