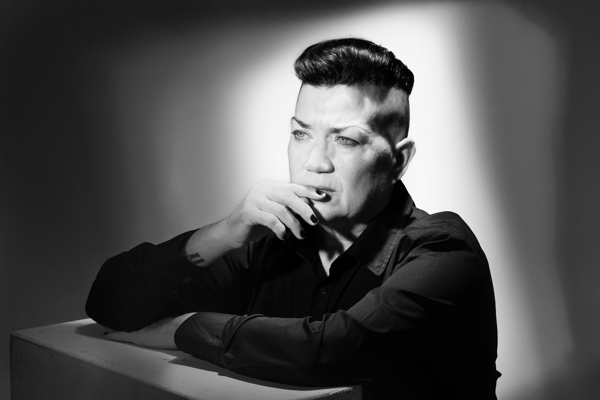 Wednesday night (December 27th) it was as cold as Paul Ryan's heart outside, but over at Jazz St. Louis it was positively smokin' as Lea DeLaria brought her David Bowie show (based on her 2015 CD House of David) to the stage. With a killer five-piece band and a special guest appearance by Manhattan Transfer founder Janis Siegel, this was a show guaranteed to nuke any holiday blues.

And without a single Christmas song!

Although she's probably best known for her role as Carrie "Big Boo" Black on the Netflix series Orange is the New Black, Ms. DeLaria has had an impressive career in stand-up comedy, theatre, and music for many years now. With five jazz albums to her credit, she's a powerful vocalist with a great ear and an unfailingly accurate feel for what makes both musical and theatrical sense.

Her show for Jazz St. Louis got off to a rousing start with a high-energy version of David Bowie's "Boys Keep Swinging" (from Bowie's 1979 Lodger album) and just went from strength to strength after that. I've never been a huge Bowie fan myself, but I came away from this show impressed with how much room his relatively simple songs leave for improvisation.

A case in point was DeLaria and company's version of the 1969 hit "Space Oddity." About half way through the original there's a short instrumental break that takes up maybe eight bars before the vocal picks up again. Wednesday night, that little break was turned into an elaborate, free-wheeling solo by keyboardist Helen Sung that helped turn Bowie's five-minute song into something of an epic.

Something very similar happened in their take on Bowie's cinematically dystopian "Life on Mars?," in which the hallucinatory lyrics of civilization in decline were paired with high-flying vocals and flashy instrumental solos. That would have been worth the price of admission all by itself.

But wait, as they say on TV, there's more! Jazz veteran Janis Siegel came onstage about half way through for a lyrical "Cherry Tree" by Grammy-winning composer, arranger, and pianist Alan Broadbent, followed by a kick-ass duet version of Harold Arlen's "Ding Dong, the Witch is Dead" aimed at That Guy in the Oval Office. Siegel and DeLaria expertly traded licks with each other and with guitarist and music director Sheryl Bailey in a way that overflowed with good humor and showed off their rapport with both each other and the band.

There were other great moments in the evening as well, including solid solo work from Roxy Coss on sax and Sylvia Cuenca on drums. And I really loved that insistent bass solo by Endea Owens that opened "Let's Dance."

The bottom line is that this is an entertaining and inventive night with a lot of terrific singing and playing. Ms. DeLaria herself is engaging and funny as hell as long as you're not put off by the f-bomb being dropped liberally. But then, if you are, you probably wouldn't be considering this show anyway.

Lea DeLaria and her band do two more sets of their David Bowie tribute tonight (Thursday, December 28th) at 7:30 and 9:30 at Jazz St. Louis's Ferring Bistro on Washington in Grand Center. The show is a co-presentation with The Cabaret Project STL (where, to be fair, I'm a board member) and it's well worth a trip out in the cold. Consider getting there early and sampling the bistro's menu; it looked pretty tasty.