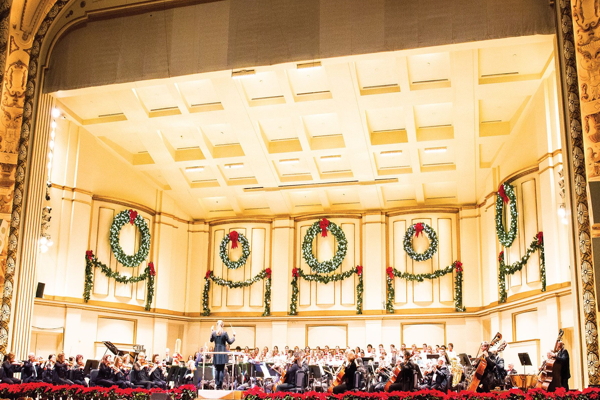 What with the unseasonably warm weather and irrationally dumb politics, it can be hard to get into the festive spirit right now, but last night (Friday, December 21st) a Poinsettia Punch and the annual "Mercy Holiday Celebration" with the St. Louis Symphony Orchestra and Holiday Festival Chorus did the trick for me. I strongly recommend the combination.

As was the case last year, Resident Conductor Gemma New was the conductor and MC. Back then I wrote that I was very taken with her elegant and fluid style on the podium and her charm as the evening's host, and I see no reason to change that opinion now. She has both the musical and PR aspects of the proceedings firmly under control.

As is usually the case with the holiday show, the evening was a mix of familiar classics and seasonal songs. Whit Richert's irrepressible Santa made his usual appearance, bringing out a child from the audience to "conduct" the orchestra in Leroy Anderson's "Sleigh Ride," and the evening concluded with "A Holly Jolly Sing-Along."

The big difference this year was the vocal soloist. Usually it's someone from the world of musical theatre like Doug LaBrecque (2017), Nicole Parker (2016), or Whitney Claire Kaufman (2013 and 2015). This year is was the captivating Spanish soprano Camille Zamora, who has a substantial classical and operatic background. Her powerful voice added to the impact of Jeff Tyzik's inventive arrangements of traditional carols like "Silent Night" and "We Three Kings" (with its lively percussion line), as well as less familiar songs like "Tu scendi dalle stelle" (roughly, "You descend from starry skies"), written in 1732 by Alphonsus Liguori.

The Holiday Festival Chorus, composed of singers from local high schools, was in fine form as always but here, too, there was a new wrinkle in the form of 20th century German composer Franz Biebl's popular "Ave Maria." Chorus director Kevin McBeth took a leaf from the book of the Venetian polychoral master Giovanni Gabrielli by putting some of his singers (members of the Pattonville High School Choir) upstairs in front of the dress circle. The antiphonal effect was striking from our seats in the Dress Circle boxes; from the orchestra floor it must have been like hearing the angels sing.

Mr. McBeth sang the introductory verse of the piece himself from his perch in front of the upstairs choir. That, too, was a first, at least for me. I'd never had the chance to hear him sing before.

Other delightful musical discoveries this year included "Chanukah 5776," a lively collection of Jewish seasonal melodies by Miami-based trumpeter and composer Sam Hyken, and Steve Amundson's "On Christmas Day" an ingenious fantasy on the British carol "I Saw Three Ships," originally written for the St. Olaf Choir's 2017 Christmas festival. There was even a Rodgers and Hammerstein number I'd never heard before: "Happy Christmas, Little Friend." It was commissioned by "Life" magazine in 1952 and performed with great warmth by Ms. Zamora.

The more familiar numbers included a couple of my favorites: Leroy Anderson's "A Christmas Festival" and the "Dance of the Sugar-Plum Fairy" from "The Nutcracker," with an impeccable celesta solo by Peter Henderson. I have loved the Anderson piece since I played the trombone part in my high school orchestra. I dare anyone not to smile at the finale, which combines "Adeste Fideles," "Joy to the World," and "Jingle Bells" in clever counterpoint.

Performances of the St. Louis Symphony's "Mercy Holiday Celebration" continue through tomorrow (Sunday, December 23) at Powell Symphony Hall in Grand Center. If this doesn't put you in a seasonal mood, you have a serious case of the Grinches.

Holiday events continue for the rest of December with "Walt Disney Animation Studios: A Decade in Concert" on Friday and Saturday, December 28 and 29 and the "BMO Private Bank New Year's Eve Celebration on the 31st. The Disney event has only "limited view" tickets at this time.