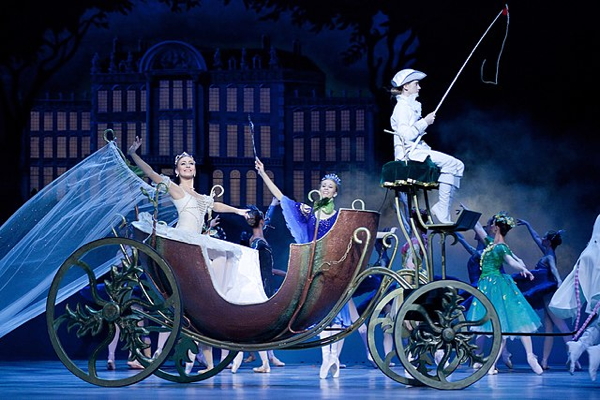 This weekend (February 15-17) St. Louis Symphony Orchestra Music Director Designate Stéphane Denève concludes his first 2019 appearance with the orchestra with an all-Prokofiev concert series that highlights the many moods of the 20th century Russian master. There will be regular season concerts on Friday and Saturday and a special abbreviated Family Series Concert Sunday afternoon.

The regular series concerts will open with a suite assembled by Mr. Denève from the score for Prokofiev's 1945 ballet "Cinderella." It's music that finds the composer in a playful and romantic mood--remarkable, given that it was begun in the depths of World War II and that the composer's wife had just left him.

SLSO program annotator Tim Munro says that Prokofiev "escaped into a fairy tale" by writing the score for this faithful adaptation of Perrault's classic. But Mr. Denève, in his own remarks in the program, points out that Prokofiev was "like Mozart, a man who reveals the child he continued to be. He has a sense of enchantment, a way of building music as if it were made of simple cubes." So perhaps it didn't necessarily take external stress to move him in that direction.

The score for "Cinderella" is, in any case, about as much fun as you can legally have in public. The thirteen numbers Mr. Denève has selected don't include many of the more whimsical and comic moments--although he has included "The Shawl Dance" in which Cinderella's two awful stepsisters fight absurdly over a scarf. His suite also contains some of my favorite bits, such as the romantic "Grand Waltz" in which Cinderella and the Prince fall in love, and "Midnight," in which and increasingly delirious waltz is suddenly interrupted by the clock, which ticks away in the percussion section. Each toll of the fateful midnight bell is met with increasingly ominous growls in the low brass and piano.

The "Cinderella" suite is the only thing on the Family Series concert, but the Friday and Saturday night concerts follow it up with the Piano Concerto No. 2. Unlike the "Cinderella" suite, the concerto is dark, sardonic, and aggressive. Which seems only fair, as its genesis involved both death--literal as well as musical--and resurrection.

The literal death was that of the composer's close friend, the pianist Maximilian Schmidt, just a few months before the concerto's first performance. As Alexander Carpenter writes at allmusic.com, "Schmidt committed suicide in 1913, and left a note to Prokofiev that read, in part, 'I am reporting the latest news to you. I have shot myself. Don't grieve overmuch. The reasons were not important.'" The musical death was that of the original score for the concerto, which was lost in a fire in Prokofiev's St. Petersburg apartment shortly after the work's premiere.

The resurrection took place in 1923, when Prokofiev completely re-wrote the concerto from memory. By then, however, his approach to composition and orchestration had changed significantly and he had written another concerto (his Third, in C major). "I have so completely rewritten the Second Concerto," he wrote to a friend "that it might be considered the Fourth."

The concerto is, in any case, a testament to Prokofiev's skill at the keyboard. It's a wildly difficult piece, with four movements in which the tempo never falls below Allegro and a stunningly challenging first movement cadenza that, at around five minutes, takes up almost as much time as the rest of the movement. "A decade ago," wrote David Nice in a review of a new recording of the concerto for BBC Music Magazine, "I'd have bet you there were only a dozen pianists in the world who could play Prokofiev's Second Piano Concerto properly. [Martha] Argerich wouldn't touch it, [Evgeny] Kissin delayed learning it, and even Prokofiev as virtuoso had got into a terrible mess trying to perform it with [Ernest] Ansermet and the BBC Symphony Orchestra in the 1930s, when it had gone out of his fingers."

I'm reminded by Balakirev's infamous "Islamey," a work so formidable that, in the end, even the composer couldn't play it. We should expect no such problems this weekend, though, as the soloist will be the justifiably celebrated Russian-born Yefim Bronfman, whose prodigious technique should be more than up to the task. He gave us a first-rate Beethoven Concerto No. 3 in 2016, for example, and a Tchaikovsky Concerto No. 1 in 2011 that practically danced across the stage.

He also recorded a pretty impressive "Islamey" back in 1998.

Closing the concerts will be the 1939 cantata "Alexander Nevsky." Based on the score Prokofiev wrote for Sergei Eisenstein's 1938 film of the same name, the work placed the composer, who had just returned to Russia to live, at the top of the People's Composer list and therefore at the bottom of the Bourgeois Formalists Headed for a Gulag list. "When you arrive in the U.S.S.R. from abroad," Prokofiev wrote at the time, "you feel something completely different. Here, dramatic works are needed, and there is no doubt what subject they should address: the subject must be heroic and constructive (it must be creative, not destructive). This is what our era demands." (Cited in "Red Zone: Sergey Prokofiev and the Soviet Union," a Playbill article by Eddie Silva).

If you have ever seen the film, you will undoubtedly remember its vivid images of the ominous, armored Teutonic Knights, which have always struck me as evocative of Nazi Germany's massive Panzer tank divisions. Relations between Russia and Germany were, to put it mildly, strained at the time, so both the film's anti-German message and anti-clerical sentiment played well with Communist officialdom. The great thing about both the film and Prokofiev's music, though, is the way they reached beyond simple agitprop to create real art. It's a thrilling and captivating score.

The St. Louis Symphony Orchestra and Chorus have performed "Alexander Nevsky" numerous times, both alone and as part of a showing of the film. They even recorded it in 1979 under Leonard Slatkin (when the chorus was directed by Thomas Peck), with Claudine Carlson as the mezzo-soprano soloist. The recording is still available in SACD format and worth having in your collection.

The Essentials: Stéphane Denève conducts the St. Louis Symphony Orchestra and Chorus, along with pianist Yefim Bronfman and mezzo-soprano Dolora Zajick (a change from the originally scheduled Clémentine Margaine), Friday and Saturday at 8 pm, February 15 and 16. The all-Prokofiev program consists of a suite from the ballet "Cinderella," the Piano Concerto No. 2, and the cantata "Alexander Nevsky." Mr. Denève also conducts the orchestra in the "Cinderella" suite in a Family Concert on Sunday at 3 pm, February 17. The concerts take place at Powell Symphony Hall, 718 North Grand in Grand Center.