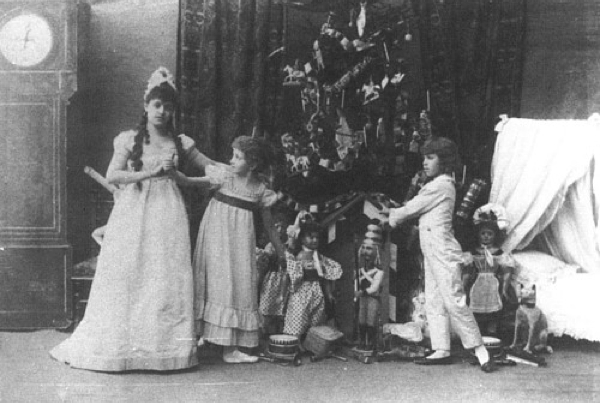 If there's one thing you can count on at this time of the year, it's that someone somewhere will be putting on a production of Tchaikovsky's popular 1892 ballet "The Nutcracker." This weekend (November 29-December 1), that includes the St. Louis Symphony Orchestra (SLSO) as Andrew Grams conducts the SLSO and St. Louis Children's Choirs in a complete concert performance of Tchaikovsky's classic. But their "Nutcracker" is probably going to be unlike any other you might have seen.

That's because, being a concert performance, it will be a "Nutcracker" without dancers (but with the charming children's chorus that accompanies the "Waltz of the Snowflakes). What it will have, though, is special lighting design by Luke Kritzeck, Director of Lighting and Resident Designer for the New World Symphony located in Miami Beach, Florida.

Mr. Kritzeck's resume is impressive, including six years touring with Cirque de Soleil as well as designs for the Chautauqua Opera (New York), the Pittsburgh Ballet Theatre, and the Guthrie Theater (Minneapolis), among others. I have no idea what he has in mind for the SLSO, but a look at his online portfolio certainly suggests it will be creative.

The use of high-tech lighting and projections is nothing new for the SLSO, of course. In the past they have found some fairly ingenious ways of using projected images to enhance works written for the stage, from a performance of Copland's "Appalachian Spring" ballet suite accompanied by watercolors inspired by the ballet, to vivid projected scenery for a concert version of "Aida," to a performance of Schoenberg's "Five Pieces for Orchestra" in which each piece was accompanied by a more or less contemporary painting that mirrored the movement's central idea.

And "The Nutcracker" is certainly brimming with colorful scenes to inspire a visual designer. The first act includes the battle between the Nutcracker and the Mouse King, the Nutcracker's transformation into a handsome prince, and the magical journey to the Kingdom of Sweets. The second act gives us the various "national" dances (Chinese, Arabian, Spanish, and Russian Trepak), along with the dance of the mirlitons (a 19th-century cousin of the common kazoo, as well as a type of cake). There's also the popular "Waltz of the Flowers," the "Dance of the Sugar Plum Fairy" with its famous celesta solo, and the dramatic "Pas de Deux" for the Sugar Plum Fairy and her Cavalier.

Act II also has one of the odder numbers, at least for contemporary American audiences: "La mère Gigogne et les polichinelles" (roughly: "Mother Gigogne and the puppets"). A character whose origins lie in French marionette theatre, she's usually portrayed as a woman (although often danced by a man) with a huge skirt out of which bursts a collection of tumblers and/or clowns. She would have been recognizable to Tchaikovsky's audiences. These days, not so much.

There's much more to be said about the music and the scenario of "The Nutcracker," but since Australian music writer Yvonne Frindle says it so well and in such great detail in the program, I'll just refer you there.

A few words are in order about this week's guest conductor, though. Now in his seventh season as Music Director of the Elgin Symphony Orchestra in Elgin, Illinois (a town of just over 100,000 around 35 miles northwest of Chicago), Mr. Grams has had guest conducting gigs with high-profile domestic orchestras such as the Chicago Symphony, the Detroit Symphony, the Philadelphia Orchestra, and the Houston Symphony. Internationally, his resume includes appearances with the symphony orchestras of Toronto, Montreal, and Vancouver, as well as the Orchestre National de France, the Hong Kong Philharmonic, the BBC Symphony Orchestra London, and orchestras in Australia and New Zealand. No wonder his web bio describes him as a "frequent traveler."

More to the point for this weekend, though, Mr. Grams has extensive experience with "The Nutcracker". He has led multiple performances of the New York City Ballet's production (with choreography by George Balanchine), as well as the first performances of a new production of the ballet for the Norwegian National Ballet in Olso. Reviewing his performance of "Nutcracker" excerpts with the Dallas Symphony, Scott Cantrell wrote that "he worked magic start to finish" and praised his "loving, sophisticated command of the score".

He'll also be bringing a musician's perspective to his conducting, having played violin with the New York City Ballet Orchestra from 1998 to 2004. He has played with the Orpheus Chamber Orchestra, the Orchestra of St. Luke's (both based on NYC), the Brooklyn Philharmonic, and the New Jersey Symphony as well.