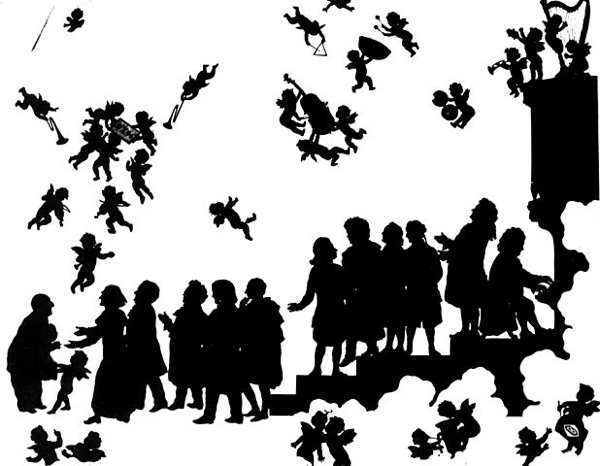 "Stepping inside a cathedral, we are filled with awe," runs the description of the program this weekend (February 15 and 16) at the St. Louis Symphony Orchestra (SLSO) web site. "Our breathing slows, our senses awaken. The music of Bruckner and Gubaidulina captures this feeling of escaping the everyday world for something beyond."

Being well-acquainted with the Bruckner work on the program (his Symphony No. 7) and having listened to Russian composer Sofia Gubaidulina's "Offertorium" more than once, I'd say that's not a bad description, although the "something beyond" in question is vastly different for the two composers.

Originally written for and first performed by the noted violinist Gidon Kremer in 1981, "Offertorium" was revised in 1982 and 1986, finally getting a recording in its final form by Mr. Kremer and the Boston Symphony in 1988. It's music that makes extravagant demands on both the violinist and the audience. Which is somewhat appropriate, given the events that inspired its main theme.

That theme is the one that Bach used as the subject of the great six-part fugue (the Ricercata) from the 1747 "Musical Offering" which was, itself, the result of an extravagant demand by Frederick the Great of Prussia. At a meeting in 1747, the king presented Bach with a long and highly chromatic theme (supposedly his own, although he may have lifted it from Handel) and challenged him to use it as the subject for a three-voice fugue. A skilled improviser, Bach did so on the spot, at which point the king, in what might have been an attempt to teach this wise guy a lesson, upped the ante to a six-voice fugue. Two months later Bach replied with his Musical Offering--two ricercars, ten canons, and (for good measure) a sonata all based on that theme. Game, set, and match.

The king's reaction has been lost to posterity.

Anton Webern's orchestration from nearly two centuries later (1934-35) raised the ante even further by making this mid-18th century piece sound entirely new. An advocate of Klangfarbenmelodie--the practice of breaking a melodic line up and distributing it to individual instruments a few notes at a time--Webern shattered and re-assigned the individual voices in ways that sound the way a kaleidoscope looks.

When Ms. Gubaidulina introduces the Bach/King Frederick theme at the start of her "Offertorium," it's in Webern's style, with each note given a different instrumental voice. Listen closely to it, because both it and you will soon be off on a wild ride.

The theme is stated a total of three times, with each statement followed by something of a fantasia for the violin and various parts of the orchestra on the interval created by the last two notes. The first time, it's the interval of a minor second based on the notes F and E. The second time around the first and last notes have been dropped (along with a host of rhythmic and orchestral changes), so the final two notes are now G and F (a major second). By the third statement two more notes are gone and the final notes are D and G, leaving lots of fourths and fifths to play with.

Those fantasias tend to be on the aggressive and anguished side, in keeping with the notion that this is an act of sacrifice. It all leads, at around the halfway point, to a massive orchestra blowup (led by the brasses and horns) followed by a long violin cadenza that leads to a more tranquil section.

The tranquility soon gives way to an angry, biting orchestral scherzo that crashes into silence from which the violin, backed up by the strings, returns with a hymn-like figure over a repeated descending piano and percussion melody that suggests the structure of a passacaglia. In marked contrast to the previous 25 minutes or so, the hymn is a beautiful thing that continually ascends towards the heavens in a way that put me in mind of some of Leonard Bernstein's work, finally ending on a soft high D on the violin.

Both this week's soloist, the young Latvian violinist Baiba Skride, and the guest conductor Rafael Payare (a graduate of Venezuela's celebrated El Sistema musical education program) will have their work cut out for them with this complex and challenging piece.

Following intermission, we get the major event of the concert, the Symphony No. 7 by Anton Bruckner, in the 1951 Nowack edition.

Writers of music criticism seem unable to discuss the symphonies of Anton Bruckner without invoking the cathedral imagery cited at the top of this article. Perhaps that's because they so strongly suggest a connection between the material and ethereal planes--great blocks of sound alternating with moments of otherworldly beauty. In Bruckner's music you can hear both great, heaven-storming power and quiet mystery. Time seems to act differently in a Bruckner symphony, with each movement incorporating so much emotional depth that it can feel both shorter and longer than the clock indicates. Amazing stuff, really.

First performed in 1884 and last heard here in 2011 under David Robertson, the Seventh is (as I noted at the time) in some ways the quintessential Bruckner symphony. The opening movement alternates moments of great, heaven-storming power and quiet mystery, the Adagio builds to a rapturous climax, the Scherzo swings back and forth between the demonic and the bucolic, and the finale builds inexorably to sheer, brass-heavy exultation. If you only wanted one Bruckner symphony in your collection, this would be it.

Each movement of the Seventh is a kind of world unto itself, and not just because of the sheer length of each ("In the first movement alone," Sir Thomas Beecham once remarked, "I took note of six pregnancies and at least four miscarriages."). The challenge for the conductor is to fully realize each of those musical environments without losing a sense of what Mr. Robertson referred to back in 2011 as the work's "insistent pulse." What will Mr. Payare make of it? We'll see this weekend.

The Essentials: Rafael Payare conducts The St. Louis Symphony Orchestra, along with violinist Baiba Skride on Saturday at 8 pm and Sunday at 3 pm, February 15 and 16. Performances take place at Powell Symphony Hall in Grand Center.