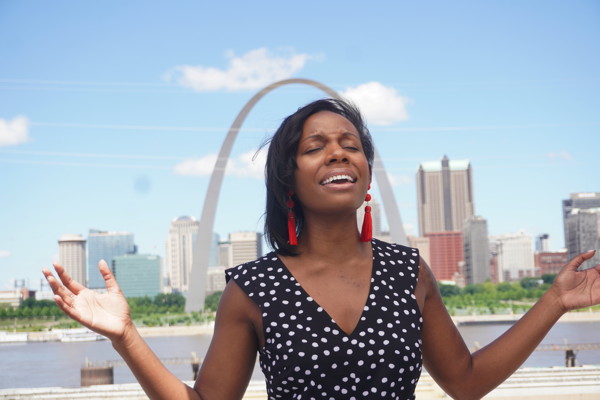 Of Thee They Sing: The SLSO Celebrates American Voices

NOTE: "Songs of America" is an ongoing project. This review represents the available performances on July 15, 2020.

Like so many other performing arts organizations, the St. Louis Symphony Orchestra (SLSO) has been obliged to increase its online presence to keep its work visible during the pandemic.  One of the most impressive of efforts in this area is the “Songs of America” project.

“Songs of America” is a YouTube playlist featuring a solid half hour of performances that, according to SLSO press materials, “celebrate the breadth of voices in American music, framed against a backdrop of St. Louis landmarks.”

Having had the chance to watch the entire playlist, I have to say that that description is completely on target.  This is a tremendous collection of stellar performances of American tunes by SLSO musicians and area singers.

“Songs of America” opens with an arrangement for voice and string quartet of “America the Beautiful” by Adam Maness of the crossover string ensemble the 442s. Sung with tremendous heart by Malena Smith of the SLSO IN UNISON chorus, the performance starts on the Powell Hall stage then then shifts to Malcolm W. Martin Memorial Park in East St. Louis, with a panoramic view of downtown and the arch in the background, finally returning to Powell for the last few moments.

Up next is an irrepressibly jolly version of Scott Joplin’s “The Easy Winners,” performed on the brick patio of the Scott Joplin House. The arrangement by Kenneth Abeling for wind quintet and percussion is reminiscent of the famous “Red Back Book” orchestral versions of Joplin’s rags published here in 1912, but with a dash of chamber music delicacy.

The mood changes again with the transcendently beautiful “Lyric for Strings” by George Walker (one of the first black graduates of the Curtis Institute of Music), performed at the Soldier’s Memorial downtown. Former SLSO resident conductor Gemma New leads nine members of the symphony strings in a powerfully moving rendition. At one point the music rises to elegiac heights while the camera pans over a stone tablet engraved with the legend “those who made the supreme sacrifice.” It’s one of those “lump in the throat” moments that reminds me why I attend classical concerts.

Sam Cooke’s “A Change is Gonna Come” is next, and while it’s a huge contrast musically, it’s every bit as gripping. Brian Owens, a familiar figure on the local music scene, shows his wide vocal and emotional range here, accompanied by the 442s with arranger Adam Maness on guitar. The performance at Kiener Plaza includes the arch and the Old Courthouse in the background.

The mood becomes jaunty again as Music Director Stéphane Denève plays Brian Holland’s arrangement of W.C. Handy’s “The St. Louis Blues” on the piano at his home. His swinging, good-humored take on this classic is a reminder of how popular American jazz has always been in France. The video includes shots of a number of local landmarks, including the Missouri Botanical Garden and the Wall of Fame mural with its images of local jazz and blues legends.

Kennedy Holmes wraps it up with a lovely, soaring “Amazing Grace” at First Baptist Church. She’s accompanied by a quartet of SLSO string players in yet another elegant Maness arrangement.

In all of the “Songs of America” performances, the musicians are clearly working at a safe distance from each other, and those who aren’t playing wind instruments or singing are masked. Kudos to the SLSO for setting such a good example.

The St. Louis Symphony Orchestra’s “Songs of America” project is available at the orchestra’s YouTube channel, along with a choice assortment of other music videos, interviews, and behind-the-scenes features.  Information on this and other SLSO projects is available at their web site.