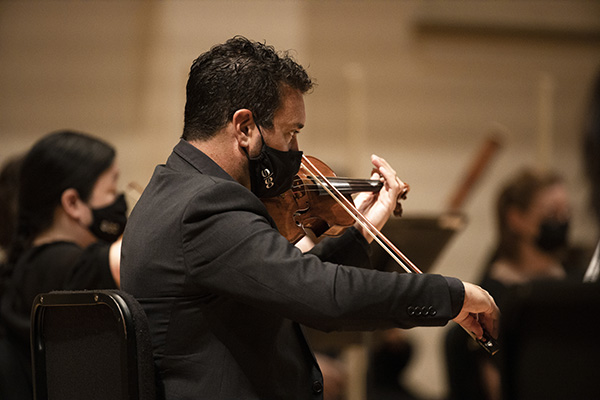 Review: Diving Into The Night With The St. Louis Symphony

Arnold Schoenberg (1874-1951), contrary to the prevailing opinions of some listeners, never forgot the emotional significance of music, and furthermore, his early work remained established on the harmonic systems of the Romantic period. The young man who would alter the course of musical composition never lost sight of the fact that music is an expressive language that moves beyond words. His 1899 composition "Verklarte Nacht" (Transfigured Night) nobly illustrates his reverence for the soulful quality of music.

[Find out more about the music with the symphony preview.]

"Verklarte Nacht" tells the story of two lovers on a lonely nighttime stroll through a park. The woman confesses that she has a child from a previous relationship that she must care for and raise, no matter if she enters into a new relationship. After wrenching discussion, her male companion assures her that their love together will be strong enough to include the child, who will only enhance their bonds together.

Schoenberg chose to encompass his thoughts into the voices of stringed instruments, a sextet of two violins, two violas and two cellos (later arranged for full string orchestra). The addition of an extra cello and viola provides a rather sensual layer of thickness and intensity to the music, underscoring the depth of emotion he wished to convey. The result is a carpet of sonority and human struggle that seems to swirl within the night sky as two lovers grapple with the issues before them on Earth.

In our scaled-down gatherings of today, the Saint Louis Symphony presented the work in its original form as a sextet, performing to a limited audience at Powell Hall, which actually enhanced the intensity of the work. The music seemed to glisten as it hovered in the air above the audience.  Six of the SLSO's remarkable string players--Erin Schreiber, violin; Hannah Ji, violin; Beth Guterman Chu, viola; Leonid Plashinov-Johnson, viola; Melissa Brooks, cello; Bjorn Ranheim, cello--joined forces to present a thoughtful, unified performance of a work that requires profound attention to detail. The six performers also demonstrated a wonderful mix of veteran and newer members of the orchestra. It is a tribute to the innate sectional strength of the SLSO that even such a diverse group of orchestra members can still achieve a stunning effect of speaking as one direct voice.

The program opened with a very different type of sextet, this one from the opening scene of Richard Strauss' final opera, "Capriccio," written and premiered in 1942. Although the opera is a flirtatious yet philosophical debate as to whether words or music reign supreme in art (represented by competing suitors, one a composer and the other a poet), it was written at the peak of World War II, when relatively few people were inclined to pursue philosophical debates. It is becoming increasingly clear that the life of Strauss himself was anything but peaceful during the war, since as a member of the Nazi party he strove to protect the lives of his Jewish daughter-in-law and--therefore--Jewish grandchildren, whom he adored. The work is heard as the opera begins, set in Paris against a setting sun as nightfall approaches. The individual lines of each instrument intertwine reflectively, echoing each other, as sort of a reflection on meandering thoughts, perhaps a desire to seek refuge from the trauma of the time period.

The middle portion of the program featured the St. Louis premiere of a new work, "Vespers," by Missy Mazzoli, composed for solo violin with recorded electronic accompaniment consisting of voices, bells, organ and electronic effects. Violinist Shawn Weil performed the solo part. The title is a reference to evening prayers recited in ritual style in  many Christian churches, yet Mazzoli is careful to note that no particular denomination, and perhaps not even any particular religion, inspired this work, but rather it draws upon the richness of ritual throughout human history. The violin leads the listener through a mysterious and multi-faceted panorama of sound. Like the other works on the program, this work is reflective, perhaps more brooding than Strauss and without the victorious optimism of Schoenberg, but all three works are marked by introspection and contemplation of who we are and where we have been.

Shawn Weil was an excellent choice for soloist in Mazzoli's work.  His style is decisive and accurate, and he produces a deep tone on his instrument. Such qualities are very helpful to a listener getting to know a new work. Weil's experience in a variety of musical genres also makes him a good choice for a work that draws on a variety of musical resources. He was able to interact skillfully with the recorded tape, enough to impart a sense of life and spontaneity to the mechanized nature of a recording.

At times such as these, much praise is due the Saint Louis Symphony for its tireless efforts to keep music--and our spirits and brains--stimulated and moving forward. Our lives would not be the same without music, so every effort to maintain its presence and its viability should be supported and enhanced in every way possible. As we move forward, it is good to know that groundwork is in place for the future of music.