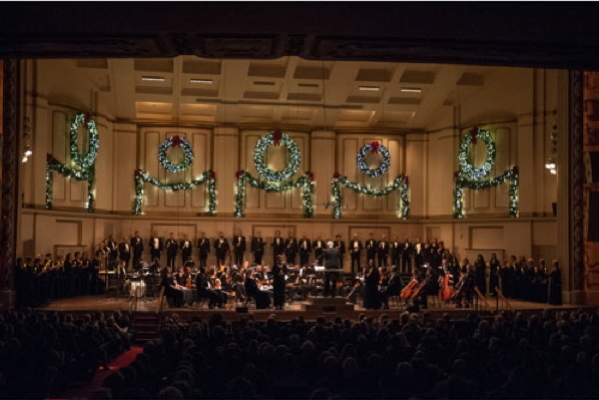 As it has every Christmas season since 1951, the Bach Society of St. Louis presented its Candlelight Concert last week (Wednesday, December 23rd). It's a local tradition grounded in fine musicianship and intelligent programming and marred only by the fact that it lasts but one night.

This being 2020, though, the concert was presented not for a live crowd in Powell Hall, but for an on-line audience nationwide. Running a little over an hour, the program combined video recordings of Music Director A. Dennis Sparger conducting the full orchestra and chorus at Powell Hall in previous Candlelight Concerts with Mr. Sparger leading a 20-member masked chorus with piano accompaniment at Cathedral of St. Peter in Belleville. It very effectively recalled the warm, seasonal spirit of those memorable live concerts. It also worked pretty well as a stand-alone event, the variable quality of some of the older videos notwithstanding.

Highlights from those past concerts included a lovely arrangement by Utah Symphony Chorus Director Barlow Bradford of the traditional British “Sussex Carol” and an infectiously joyous version by Steve Barnett of the traditional “Go Tell It On the Mountain” that had a nice sense of swing. The singers were clearly enjoying themselves—all smiles and hand claps in the final refrain—and soloists Jenny Ubi, Joe Codispoti, and Shawn Neace all brought their own individual styles to their verses. The syncopated rhythms and bracingly astringent harmonies of 20th-centry Welsh composer William Mathias’s arrangement of the old English carol “Sir Christèmas” offered a pleasant contrast to more traditional fare and were performed with impressive precision by the orchestra and chorus.

The most popular aspect of the Candlelight Concerts has always been the procession that always opens the second half. The lights dim, and the members of the Bach Society walk down the aisles singing, each with an electric candle. Those lucky enough to be sitting downstairs in the orchestra section are soon surrounded by singers, enveloping the listener in a constantly changing kaleidoscope of sound. You could never really capture that on video, of course, but the recording included in this year’s concert did bring back pleasant memories of that unique experience.

The newly-recorded segment had a unique charm of its own. Under Mr. Sparger’s sure direction, the small chorus sang with remarkable clarity despite their masks and Sandra Geary provided solid piano accompaniment. As Mr. Sparger noted in remarks during the broadcast, the St. Peter Cathedral was originally chosen for recording because its size made physical distancing easier, but the reverberant acoustics also had the benefit of adding a sense of power to the music. Recording engineer Paul Hennerichs deserves congratulations for getting clear, coherent sound out of what must have been a challenging sonic landscape.

The mix of material for that segment was nicely balanced, combining two traditional carols (“The Carol of the Bells” and “We Wish You a Merry Christmas”) with Bach’s “Jesu, Joy of Man’s Desiring” (fitted out with new lyrics by the late Leonard Van Camp of SIU-Edwardsville) and the film classic “Have Yourself a Merry Little Christmas.” That last one is especially poignant in this Year of the Plague, which made traditional holiday gatherings a source of hazard instead of happiness. “Someday soon, we all will be together,” runs the original lyric, “if the fates allow.” We can but hope.

The program concluded on a lighter note with contemporary American composer Craig Courtney’s witty arrangement of “The Twelve Days of Christmas,” in which each verse was orchestrated in the style of a different composer and/or musical era. As a bonus, most of the arrangements also included a nod to the lyrics.

So, for example, the “seven swans a-swimming” uses the “Swan” theme from Saint-Saëns’s “Carnival of the Animals,” the “eleven pipers piping” is set to the “Dance of the Mirlitons” (toy flutes) from Tchaikovsky’s “Nutcracker,” the “eight maids a-milking” become the eight Valkyries from Wagner’s “Die Walküre,” and the “twelve drummers drumming” are setting the beat for Sousa’s “Stars and Stripes Forever.” The program lists only the century and country of inspiration for each verse (e.g., “19th-century France” for Saint-Saëns), leaving it to listeners to fill in the blanks. Judging from the laughter, the audience at the concert where this was recorded had no difficulty doing so.

The Bach Society’s on-line Candlelight Concert was a one-time-only event, and the Society’s calendar for 2021 has yet to be publicly announced, but you can keep in touch with their plans at their web site.