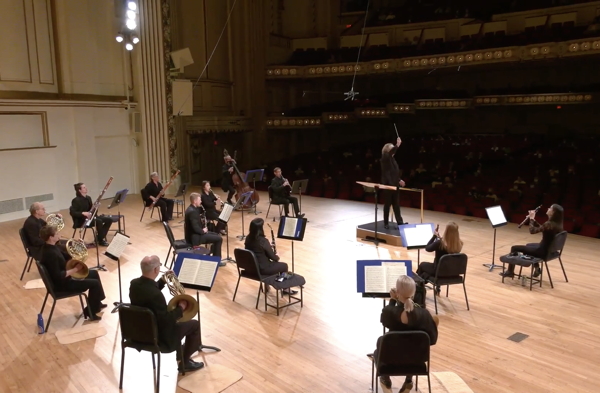 The live concert season of the St. Louis Symphony Orchestra (SLSO) is on hiatus until the fall, but the orchestra’s on-demand video series is still going strong. Available through September 4th, the latest release stars members of the SLSO winds in a thoroughly engaging pair of serenades by Mozart and Richard Strauss under the baton of Music Director Stéphane Denève.

[Find out more about the music with my original symphony preview.]

Recorded at Powell Hall April 30th through May 2nd and originally reviewed by me back then, the concert features a pair of works by young composers just starting to make a name for themselves, albeit around a century apart.

In a reversal of the usual musical cliché, the Strauss Serenade for Winds in E-flat major, op. 7 that opens the program is the short and pithy one, while Mozart's Serenade No. 10 in B-flat major, K. 361 (370a) is the symphony-length work with seven entrancing movements. Both get exceptionally well-crafted performances by Maestro Denève and his musicians, beginning with a pleasant trip through Strauss’s musical terrain.

Written when the composer was a lad of 17 who had yet to graduate from high school, the Op. 7 serenade has often been called a surprisingly mature-sounding work. Presumably that’s a reflection of the mood of quiet contemplation that can be heard in some of the composer’s much later work. Scored for a 13-member ensemble (three pairs of flutes, oboes, clarinets, and bassoons, four horns, and either contrabassoon or double bass) the work gets a warm and welcoming treatment from Mr. Denève that neatly balances the calm outer sections with the more stormy B-minor interlude in the middle.

It’s as if a serene sunset were briefly interrupted by a sudden squall that subsides into a euphonious horn chorale before returning to the more contemplative mood of the opening. Principal Horn Roger Kaza and his fellow players Julie Thayer, Tod Bowermaster, and Victoria Knudtson truly distinguish themselves here and in the Mozart that follows.

Speaking of which: Mozart was only a few years older than Strauss when he wrote the Serenade No. 10. The composition date is a bit obscured by the fog of history, but it probably dates from around 1781—almost exactly a century before the Strauss serenade. Equally obscure is the nickname the work has picked up over the centuries, “Gran Partita” (literally “Large Suite”). Someone other than Mozart scribbled it on the manuscript, and it has clung, like a stubborn barnacle, over the years.

It not hard to understand why, though. At around 45-50 minutes and boasting a 13-piece orchestra (like Strauss’s serenade, but with two basset horns instead of flutes) the piece is over twice the size of the conventional aristocratic garden party wind band of the late 18th century. Everything about it is, for its time, larger than life, from the opening Largo—Allegro molto that feels more like an opera overture, to the theme and virtuoso variations of the sixth movement and the high-stepping Finale seventh movement.

In his introductory comments on the video, Denève describes the Serenade as “an incredible masterwork of epic proportions [that] exudes joy and vital energy.” No surprise, then, that his interpretation is appropriately grand and expansive without ever getting within even hailing distance of stodgy.

The first Menuetto is dignified and graceful—aristos gliding in the garden—with a bubbly, bucolic trio featuring Scott Andrews and Tzuying Huang on clarinets and Ryan Toher and Jane Carl on the larger and lower-pitched basset horns. The second Menuetto gets a good-humored treatment that suggests the servants dancing in the cellar—more openly jolly with a Ländler trio that brings in a bit of brisk Tyrolean air.

Anyone who has seen Peter Shaffer’s play "Amadeus" in any of its multiple stage revisions or its 1984 film adaptation will recognize the exquisite Adagio third movement as the music whose beauty drives poor Salieri to distraction. Here in the real world, Erik Smith has called the Adagio “the loveliest of all movements written for wind instruments”. It’s easy to believe both, given the lovely treatment of this music by oboists Xiomara Mass and Cally Banham (usually heard on English horn), along with Andrews, Huang, Toher, and Carl. The videography brings you face-to-face with Mass during her solo, allowing you to see the intense concentration of her performance.

The Thema mit Variationen gives everyone a chance to show off a bit, including bassoonists Andy Gott and Felicia Foland, along with the redoubtable Erik Harris providing a solid foundation on double bass, just as he does in the Strauss. Mr. Denève follows that attacca (without pause) with a frolicsome Finale (to steal a phrase from Benjamin Britten) that brings everything to a happy conclusion. To quote Caitlin Custer’s original program notes on that last movement: “Serve the coffee, gather the coats, get the guests on their way!”

Available through September 4th, this is one of a series of digital recordings of concerts by the SLSO from this past spring. If you missed them live, this is a golden opportunity to see them in the comfort of your own home. For more information, visit the SLSO web site.