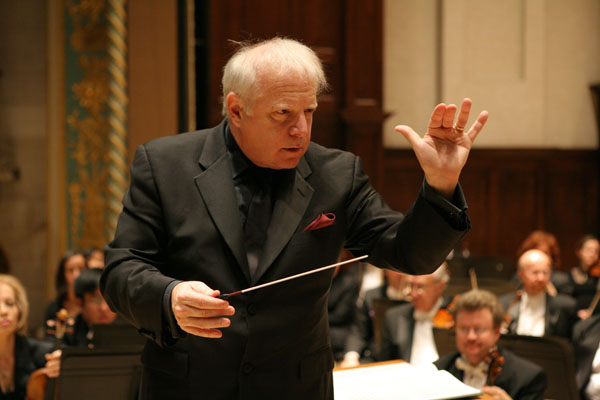 Symphony Review: Slatkin and the SLSO showcase music made in America

It feels like very little carries the “made in America” label these days, when even our disinformation is largely imported. But the St. Louis Symphony Orchestra (SLSO) concerts last weekend (October 9 and 10), titled “Made in America,” emphatically demonstrated that, when it comes to great music, the USA still produces more than its share.

Under the baton of Conductor Laureate Leonard Slatkin, the orchestra performed three works composed here in the USA—two by contemporary native-born composers and one by a political refugee who died in 1945, shortly after becoming a citizen. They covered six decades and a variety of styles, and made up a polished and satisfying program.

Kicking it off was the opus that gave these concerts their title: “Made in America,” written in 2005 by Joan Tower, Composer-in-Residence with the SLSO from 1983 to 1987 when Leonard Slatkin was the Music Director. Tower has described an 1882 hymn tune by Samuel A. Ward now known as “America the Beautiful” as the underlying theme of her tone poem and, in fact, the melody (or at least transformed bits of it) does truly permeate the work. It does so, though, in ways so ingenious and subtle that, even after listening to a recording of the work several times, I didn’t fully appreciate all of them until I finally heard it live on Sunday.

The overall feeling is that of a melody constantly at war with different versions of itself. Which, sadly, seems a very appropriate metaphor for our nation these days.

“Made in America,” like the other two works in the program, is difficult and demanding music. Some of the writing for the brasses (especially the trumpets) sounds exceptionally tricky. I’m pleased to report that the SLSO musicians did a splendid job with it under Slatkin’s assured direction. This is, after all, a band he knows well of old, even if many of the personnel have changed since he was MD.

Up next was William Bolcom’s Violin Concerto, written in 1983 and inspired by the playing of jazz violinist Joe Venuti, whose influence is most clearly heard in the solo violin part in the finale. As you might expect from a composer whose catalog includes everything from symphonies and operas to ragtime and cabaret songs, the Violin Concerto is, in the words of American Composers Orchestra Music Director Derek Bremel, “a true hybrid, combining bluesy lyricism with pulsating rhythms and more than a hint of crunchy chromaticism and polytonal clusters.” There’s a ragtime tune in the first movement, a tender theme in the second that’s almost a romantic 1940s ballad, and a jaunty melody in the finale that strongly suggested Gershwin’s “Promenade” from the Astaire/Rogers film “Shall We Dance?” (1937).

The concerto was originally scheduled for its St. Louis premiere last April, with Concertmaster David Halen as the scheduled soloist. Halen finally got to play it this weekend, and his performance was well worth the wait: technically proficient, emotionally committed (the lyrical moments of the second movement were especially sweet) and, in short, a reminder of what great musicians we have in our orchestra. He expertly rendered the cadenzas in the first two movements, along with the various Venuti touches in the finale.

Slatkin’s musical interests are equally diverse, happily, and his reading of the work felt very much in synch with Bolcom’s intentions. Again, the orchestra sounded superb. My only complaint is that, at least from our seats in the Dress Circle boxes, the balance between Halen and the orchestra was not always ideal, at least in the first movement. At least some of that was probably a matter of Powell Hall’s acoustics.

The concerts concluded with yet another virtuoso workout, the “Concerto for Orchestra” by Bela Bartók. The Boston Symphony Orchestra's famed music director Serge Koussevitzky commissioned the work in 1943, when the finances and health of the composer, who had emigrated to the USA in 1941 to escape Nazi persecution, were both bottoming out. The project worked like a tonic. Bartók threw himself into the project and the final result has been part of the core orchestral repertoire ever since.

Much has been written about the melodic and stylistic richness of this music, so there’s no need to repeat all of that here. The important thing is that it offers a cornucopia of opportunities for individual players and sections of the band to show off. Which the members of the SLSO certainly did Sunday afternoon.

Highlights included the powerful sound of the horns and brasses in the first movement; the crystal-clear series of duets in the Giuoco [sic] delle coppie ("Game of couples") second movement; the rich, dark sound of the violas in the Elegia third movement; and the wonderfully comic trombone break in the Intermezzo interotto (“Interrupted intermezzo”) fourth movement. Slatkin’s pacing and dynamics were perfect. The result was a stirring performance that got an enthusiastic and well-earned ovation.

Next at Powell Hall: John Storgårds conducts the St. Louis Symphony Orchestra in “Changing Times.” The program consists of premieres of Haydn’s Symphony No. 64 (“Tempora mutantur”), Thomas Adès’s Piano Concerto with soloist Kirill Gerstein, and the “Midnight Sun Variations” by contemporary Finnish composer Outi Tarkiainen, along with Nielsen’s Symphony No. 4 (“The Inextinguishable”), last heard here in 2014. Performances are Friday at 7:30 pm and Saturday at 8 pm, October 15 and 16.