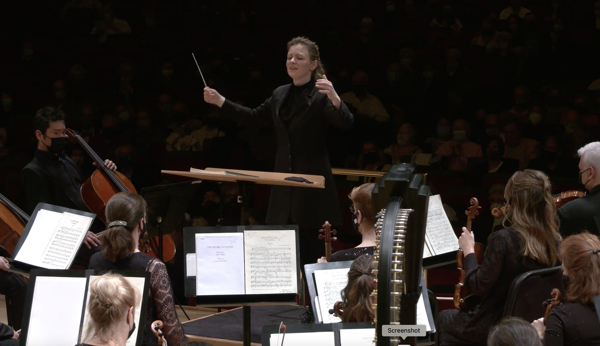 Last November 26 and 27, Gemma New, the former Resident Conductor of the St. Louis Symphony Orchestra (SLSO), returned to Powell Hall to conduct the first of a special pair of concerts honoring the life and work of the late St. Louis Post-Dispatch music critic Sarah Bryan Miller. A live HD video recording of that concert is now available from the orchestra’s web site.

A former professional mezzo-soprano and life-long singer, Bryan (as she preferred to be called) died on November 28, 2020 after a long and valiant battle with cancer. She left the SLSO a substantial bequest, which was used to establish the Sarah Bryan Miller Fund to support vocal soloists and performances of choral repertoire with the SLSO. That weekend’s concerts, which featured two works for solo mezzo-soprano, represented the first use of that fund. If you missed this exceptional program in 2021, this is a golden opportunity to experience it in the comfort of your own home.

The concert opens with the 1898 version of Elgar’s song cycle “Sea Pictures.” Although it uses poems by five different writers (including the composer’s wife, Alice), both the sea and mortality are consistent presences. The latter is often in the subtext or just in the dark orchestral colors of the lower strings and percussion, but it’s always there.

Still, there is a wide variety of moods and imagery in “Sea Pictures,” and mezzo Sasha Cooke (who was so very good in Bernstin's Symhony No. 2 here in 2019) masterfully does them all justice. Her voice is rich and fluid and her acting skills (as you would expect from someone with her opera credentials) vividly bring out the joy of “In Haven (Capri)” (text by Alice Elgar), the religious ecstasy of “Sabbath Morning at Sea” (text by Elizabeth Barrett Browning), and in Richard Garnett’s “Where Corals Lie,” that unfocused, distant stare of someone who is halfway between life and death. Principal Harp Allegra Lilly’s playing here strongly reinforces that feeling.

When I saw this live, Cooke was sometimes overwhelmed by Elgar’s large orchestra, but that’s not an issue with the clear, well-balanced sound in this video, which also makes the lyrics more understandable than they were live. As a bonus, you get a close-up view of Cooke’s impassioned performance that was impossible in the original concert.

Balance issues are also absent in the next work, Jake Heggie’s “The Work at Hand” from 2015. Based on a poem of the same name by late Laura Morefield (1961-2011), who had just been diagnosed with cancer, “The Work at Hand” is, in the words of the composer, “about the difficult and deeply human experience of knowing it is time to say goodbye and let go.” He calls the poet’s language and imagery “particularly striking: origami, the yoga Warrior 1 position, and a shimmering reconnection to nature.”

Here, again, Cooke is always fully in the moment, making the complex and beautiful text truly live. And the combination of Heggie’s more transparent orchestration and the high quality of the audio engineering make it easy for her to be easily heard and understood. Closed captioning is available, but I doubt that most of you will need it.

Heggie’s arrangement of his own original for voice, cello and orchestra (the latter replacing the piano) is quite imaginative, treating each of the poem’s three stanzas as separate entities; a sensible decision, given their contrasting moods. His use of woodblocks and other “Japanese” touches sets the tone for “Part One: Original Origami”; the militaristic feel of “Part Two: Warrior One” reflects the poet’s vision of defiance; and the ethereal sounds of the harp, woodwinds, and vibraphone provide an otherworldly ambiance for the quiet acceptance of “Part Three: The Slow Seconds.” A transcendent violin solo by Concertmaster David Halen) adds to that sensibility.

Despite the fact that the Heggie work was a local premiere and that the Elgar might as well have been (it was last performed by the SLSO 35 years ago), New and the band do a grand job of bringing them to life. If you have seen New in action before, you know she is a theatrical conductor who engages on a very physical level with the score. Her big, sweeping gestures are a kind of 3-D metaphor for the music. The camera also allows you to see the way her deep involvement with the music is reflected in her face—a view normally available only to the musicians.

That striking visual presentation only works, though, because of the rigorous effort that has clearly gone into preparing the piece in advance. Much like a theatrical director, a conductor does the vast majority of their work out of sight of the audience.

That same combination of discipline and visual drama also make Rimski-Korsakov’s popular "Scheherazade," the concluding work on the program, an experience to be savored and one which is likely to live long in my memory.

New is truly in her element here, with a majestic, high-energy rendition of the composer’s colorful fairy-tale world of the "One Thousand and One Nights.” The opening duet for harp and violin is magical, thanks to Lilly and Halen, and the main body of the movement, depicting “The Sea and Sinbad’s Ship,” carries with it an almost visceral sense of the vast ocean and the rocking vessel. “The Story of the Kalandar Prince” is filled with a sense of adventure,with outstanding opening and closing solos by Principal Bassoon Andrew Cuneo and Principal Oboe Jelena Dirks. “The Young Prince and Princess” has just the right amount of romance without a trace of treacle and with some graceful dancing from the muted trumpets, flute, and tambourine. The final movement is a high-definition, big-screen evocation of Rimsky-Korsakov’s rich collage of images: a fair in Baghdad (including some brilliant double- and triple-tonguing from the trumpet section); a shipwreck; and the final, gentle triumph of Scheherazade. Some of New’s tempos here are breathtakingly fast and pack a potent punch.

You will be less than astonished to know that it brings the entire house quickly to its feet. That included everyone in our party when we saw it live.

This video is part of a series of recordings of recent live concerts. Ticket information and a complete list of videos in the series is available at the SLSO web site.