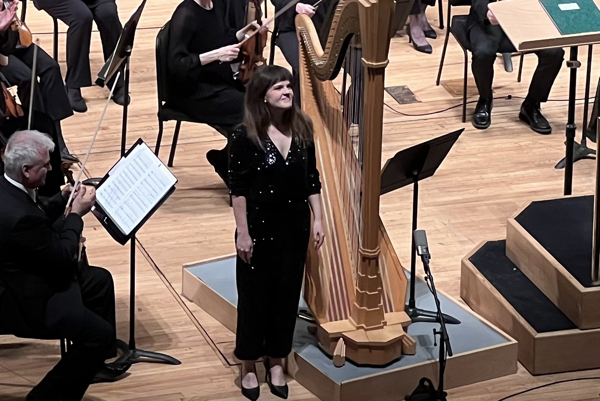 Symphony Review: That (very) big band sound with the SLSO

It was another Big Band night at the St. Louis Symphony Orchestra (SLSO) last Saturday (April 23) as guest conductor Kirill Karabits made his St. Louis debut with a program that emphasized large instrumental forces and sound levels that sometimes approached rock concert intensity.

The program opened with Azerbaijani composer/pianist Franghiz Ali-Zadeh‘s “Nagillar” (Fairy Tales), a 2002 work that begins with a massive, attention-grabbing crash and then soars off in a riot of orchestral color. Inspired by an episode from the “Thousand and One Nights” involving a magic carpet flight and the subsequent adventures of a prince and princess, “Nagillar” is a veritable catalog of the kind of unorthodox instrumental techniques that were regarded as avant-garde around 50 or 60 years ago. Piano strings are strummed directly, hit with mallets, and otherwise altered to produce unusual sounds. The brasses blare and yawp, woodwinds squeal and twitter, and at one point the musicians are instructed to improvise on a collection of motifs ad libitum.

The result was an eclectic mix of influences from Schoenberg, Webern, Messiaen, John Cage, and other composers championed by Ali-Zadeh as a pianist, along with elements of traditional Azerbaijani music. At around 15 minutes, it was just the right length to retain its novelty, sustain its high energy level, and allow the audience to admire the remarkable virtuosity of the SLSO musicians. Kudos also to Maestro Karabits for pulling together a complex score that was so thick with notes that you could see them from the dress circle.

One stage change later we had a somewhat smaller orchestra (albeit with five percussionists) for the Harp Concerto by Argentinian composer Alberto Ginastera, with SLSO Principal Harp Allegra Lilly as soloist. Originally commissioned in 1956 by Philadelphia Orchestra harpist Edna Phillips, the work didn’t get its premiere until nearly a decade later. That’s partly because the composer lacked experience in writing for the harp and partly because the concerto broke a lot of new ground by extending the range of sounds the instrument (and the player) were called upon to produce.

That poses many technical hurdles for both the soloist and the conductor, which may be one reason why it’s not heard more often. The SLSO hasn’t done it since 1974, for example, but you wouldn’t have known that from the high quality of Saturday night’s performance.

Lilly was superb in the solo role, with plenty of bite and drive in the lively first and third movements, perfectly lyrical angst in the second, and a stunning rendition of the difficult cadenza that links the second and third movements. She seriously rocked the piece—which is exactly what you want in a dance-influenced work like this one. Under Karabits’s precise direction, Lilly’s fellow musicians gave her outstanding support.

The evening closed with Prokofiev's Symphony No. 5. Composed at the artists' colony of Ivanovo just as the war with Germany was turning in Russia's favor in 1944, the symphony was last heard here in September 2014 with David Robertson on the podium. Originally scheduled for a March 2020 SLSO program that was cancelled by the pandemic, the Fifth is, as a wartime work, arguably more relevant today—especially since Prokofiev was born in what is now Ukraine.

Described by the composer as "a hymn to free and happy Man, to his mighty powers, his pure and noble spirit," the Fifth does carry an air of triumph, especially in the majestic opening theme. But it feels like the war was never far from the composer's mind. You can hear it in the militant percussion of the first movement and the anguished climax of the third. There are caustic comments from the brass and percussion, and the boisterous Allegro giocoso finale is briefly interrupted by a short, dissonant passage for a small string ensemble just before the final big chord.

All of the Fifth’s many moods were on display in Karabits’s absorbing performance. There was palpable anguish and terror in the development section of the first movement, along with an overpowering coda. The contrast between the militaristic main theme and more playful trio of the Allegro marcato second movement was sharply drawn, and the brutal death march the emerges towards the end of the third movement was chilling. The finale was appropriately triumphal without sacrificing any of Prokofiev’s subtle irony.

And then there was the usual fine playing by the SLSO. The woodwinds were in superb form, especially in the second movement. So was the large brass section—five horns, four trumpets, three trombones (including Gerry Pagano’s stentorian bass), and tuba (Chance Trottman-Huiet). Great sound all around, in short.

That was the end of the official program, but Karabits returned to the podium after a massive ovation to thank the audience for their warm response and to offer an unlisted encore as a gesture of solidarity with his fellow Ukrainians, suffering under the brutal aggression of Russia. It took the form of the lovely “Angel: Poem Nocturne” by the Ukrainian composer Théodore Akimenko (1876-1945), whose work is only now coming to light in the West. The performance—including the beautiful solo by Principal Cello Daniel Lee—and the sentiment behind it were, I’m happy to report, both enthusiastically embraced by the audience on Saturday.

Next at Powell Hall: The SLSO bids a fond farewell to SLS Chorus Director Amy Kaiser, retiring after 27 seasons, with a program of Vaughn Williams’s “Sea Symphony,” Debussy’s “Nocturnes,” and Jessie Montgomery’s “Starburst.” Stéphane Denève conducts the orchestra and chorus along with soloists Katie Van Kooten, soprano, and Stephen Powell, baritone. Performances are Saturday at 8 pm and Sunday at 3 pm, April 30 and May 1. The Saturday concert will be broadcast live, as usual, on St. Louis Public Radio and Classic 107.3.