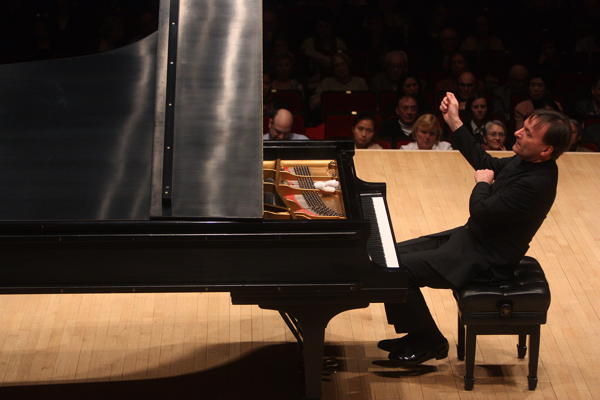 Symphony Review: Flash and finesse in an all-Russian program with Hough and Søndergård

Watching pianist Sir Stephen Hough and conductor Thomas Søndergård give us their nuanced and balletic take on Tchaikovsky’s venerable Piano Concerto No. 1 in B-flat minor at the St. Louis Symphony Orchestra concert last Saturday (October 29th), I once again found myself wondering how the composer’s first choice as a soloist, the Russian composer/pianist Nikolai Rubinstein, could have dismissed the work as “worthless and unplayable.” How could such an immensely appealing piece have inspired such an ugly response?

Certainly there was nothing to complain about in Hough’s performance and everything to praise. I have no idea how many times I have experienced this concerto both live and on recordings, but even so Hough found subtle shadings of emotion, tempo, and dynamics that made it fresh. His reading of the first movement cadenza, in particular, had an appealing sense of improvisation and discovery. He and Søndergård also brought out the choreographic elements in a work which is, after all, dominated by danceable triple meters (3/4 and 6/8).

The Big Moments were brought off with the requisite drama and flash as well, including the powerful statement of the opening theme and the electrifying intensity of the Allegro con fuoco finale. But there was also plenty of heart, most notably in the opening pages of the Andantino simplice second movement, with a delicate solo by Associate Principal Flute Andrea Kaplan. The ovation was justifiably enthusiastic.

Not surprisingly, there was an encore, and an exceptionally well chosen one at that: Chopin’s “Nocturne” No. 2 in E-flat major, Op. 9 No. 2. It’s graceful, a bit sad, and utterly different from the fireworks of the Tchaikovsky. Hough played it with the sort of light touch which, we are told, characterized Chopin’s own performances.

There’s not much lightness to be found in the work that concluded the concert, Symphony No. 7 in C-sharp minor, op. 131 by Sergei Prokofiev. It was his last symphony—his last completed work, in fact—and it was the work of a man whose physical and fiscal health were both at a low ebb thanks to the condemnation by Stalin’s cultural enforcer Andrei Aleksandrovich Zhdanov. Although written in a simpler and more approachable style than some of the composer’s earlier works, the Seventh is elegant and even witty on the surface but dark and despairing underneath.

Søndergård did an impressive job of showing us both the light and the darkness—a delicate balancing act, executed with a skill that would do credit to the Flying Wallendas. The Moderato first movement was elegant and elegiac, while the Allegretto second movement and perfect mix of bumptious humor and snarling sarcasm with a properly hysterical, “all fall down” coda. The dark nostalgia of the Andante espressivo came through clearly as did the cheerful children’s march that opens the Vivace finale. The romantic, Korngold-esque theme that materializes towards the end was appropriately glossy, and the quiet, wistfully sad moment for xylophone and muted trumpets that follows would have been tremendously effective if Søndergård had allowed it to conclude the symphony as Prokofiev originally intended it to.

Unfortunately, Søndergård chose the version of the final movement that Prokofiev created at the suggestion of conductor Samuil Samosud, who felt that a more upbeat finale would stand a better chance of netting the composer the 100,000 ruble Stalin Prize. That version, which simply tacks the opening march theme on to the original ending, sounds just like the last-minute addition that it was. Which is probably why most conductors seem to have stuck with the composer’s original.

That odd choice aside, though, Søndergård was never less than persuasive on the podium, and his reading of the opening work, Anatoly Liadov’s miniature “The Enchanted Lake” Op. 62, was a shimmering, gravity-defying delight. There was an almost pointillist delicacy to the short motifs in the horns and woodwinds and a dreamy evanescence to the whole business.

Next at Powell Hall: the regular season pauses while the orchestra plays John Williams’s score for the film “Jurassic Park” live to accompany the film on the big screen at Powell. Showings are Friday and Saturday at 7 pm and Sunday at 2 pm, November 4-6. The regular season resumes November 11 and 12 as John Storgårds and violinist Leila Josefowicz perform music by Sibelius, Beethoven, and the US premiere of Helen Grime’s Violin Concerto.