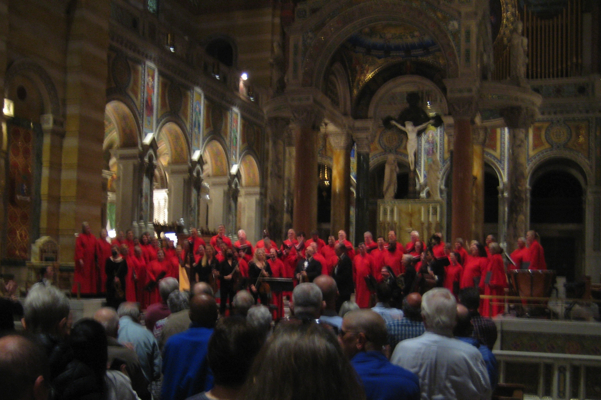 The second concert of this season’s Cathedral Concerts series at the Cathedral Basilica of St. Louis was a tribute to Dr. James Ottolini (1939-2008) and to Barbara Ottolini (1944-2021), sponsored by the Ottolini family, and offered gratis to the community, in advance of All Souls’ Day. Barbara Ottolini had served on the board of directors for Saint Louis Cathedral Concerts, and passed away just last November from pancreatic cancer. In a welcome speech before the music, their youngest daughter Cady Ottolini O’Grady said that the “Requiem“ of Gabriel Fauré was a particular favorite of her parents. Fittingly, Fauré’s “Requiem“ concluded this program, performed by the St. Louis Archdiocesan Choir and Orchestra, conducted by Andrew Kreigh, the recently appointed director of music for the Archdiocese of Saint Louis.

Three short choral works began this concert, which ran for about an hour without intermission. The first work was “The Lord Is My Shepherd” (1979) by John Rutter (born 1945), a setting of Psalm 23 for choir and organ. The personnel roster indicated division of the Archdiocesan Choir between two ensembles, the Cathedral Choir and the Schola Cantorum. Given the sonic challenges of the acoustic of the Cathedral Basilica, with its reverberation time of 6+ seconds, the articulation of the full Archdiocesan Choir came through very well, admittedly from a fairly close seat about 8 pew rows back. The. work is quite restrained in its setting, except for a volume rise in the final line “And I will dwell in the house of the Lord” that settles back in due course.

Next was a work by the young British composer Philip Stopford (born 1977), “Do Not Be Afraid”, an adaptation by Gerard Markland of text from Isaiah 43. The choral forces shrank to those listed as from the Cathedral Choir, about 25 or so singers. Stopford was a new name to this reviewer, and this work my first experience of any of his music. This work was pleasant to listen to – and that’s about it. One nice surprise, however, was the sudden soprano solo towards the end, sung very well here by Anna Bono. (A not-so-nice surprise was the sound of an e-mail send swipe tone by someone who obviously didn’t turn off his mobile phone before the concert started.)

The third work shrank the on-stage personnel even further, to the 12 singers of the Schola Cantorum, for a setting by the great Italian 16th century composer Giovanni Pierluigi da Palestrina of the text “Ego sum panis vivus” (“I am that bread of life”). This is the sort of selection that fits the general stereotype of choral music, in the best sense of the phrase, and in so far as the public at large has any sort of image of choral music at all. Paradoxically, even though the Palestrina used the smallest choral forces of this group of 3 selections, it had the richest tone.

The full choir reassembled for the Fauré “Requiem“, joined by an orchestra of 12 players plus organist Benton Blasingame. This performance used an edition of the score edited by John Rutter, which uses a chamber ensemble orchestration of 8 string players, 2 horns, a harpist, and a timpanist, along with the organist. It proved a wise idea to use a smaller orchestra, again because of the inherent challenge of the long reverberation time of the Cathedral Basilica’s acoustic, where a larger ensemble would have sounded much muddier. One interesting feature of Rutter’s edition is that the violas serve as the main string timbre, and thus the concertmaster is a violist rather than a violinist. The one violinist in the ensemble, here Lenora-Marya Anop, sat behind the front row violas, which was fitting for her main solo in the 3rd movement ‘Sanctus’. Anop earned applause after the ‘Sanctus’, the only such audience reaction in the midst of the work.

Among the distinguished roster of musical Requiems, Fauré’s is one of the most restrained and gentle in spirit. As an example, by omission, Faure does not include a full setting of the apocalyptic ‘Dies irae’ text that Berlioz and Verdi so vividly and memorably depicted in their respective Requiem Masses. Instead, Faure intersperses a short section of the ‘Dies irae’ text into the 6th-movement ‘Libera me’, for the closest thing to dark drama in the work. Fauré’s “Requiem” spends a very fair quotient of its time in the consolatory emotional realm, compared to the wider spectra of Berlioz, Brahms, or Verdi.

Normally, the Fauré “Requiem” has a baritone and a soprano soloist. For this performance, the baritone solo part was divided between two singers, Xavier Ojeda in the 2nd movement ‘Offertory’ and Daniel Cross in the ‘Libera me’. Emily Kennebeck was the soprano soloist in the 4th movement ‘Pie Jesu’. She was the most successful of the 3 soloists in overcoming the acoustic, with clarity of text delivery. To be fair, the acoustic defeated the entire choir at several points, notably in the ‘Offertory’. However, as with life in general, you work with the acoustic that you have, not the acoustic that you wish you had. On the whole, the choir and orchestra did a fine job, and honored the Ottolinis well indeed. Also heartening to see was a crowd of around 600-700, by eyeball estimate.