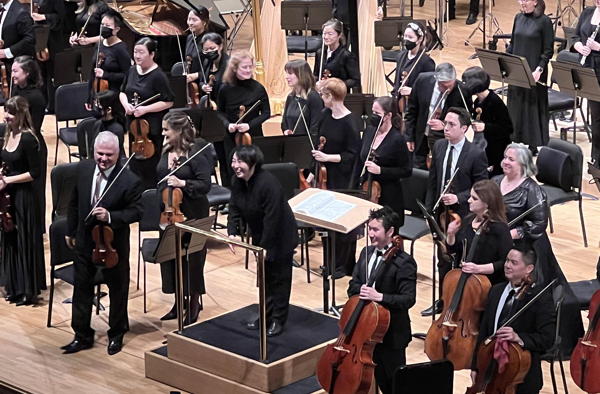 Symphony Review: A dynamic double debut for Thanksgiving weekend at the SLSO

It was a double debut this past weekend (Saturday and Sunday, November 26 and 27) as both conductor Xian Zhang and pianist George Li made their first appearances with the St. Louis Symphony Orchestra. We’ve had some impressive debuts at Powell Hall over the years, but it’s unusual to be treated to two of such outstanding quality at once.

With three decades of podium experience behind her Zhang, who is currently in her seventh season as Music Director of the New Jersey Symphony, radiated confidence from the moment she strode on to the stage. She approached the opening work—the overture to the comic opera “L’Italiana in Algeri” (“The Italian Girl in Algiers”) by Rossini—with a cheerful gusto that was the perfect match for this lively and appealing piece. She captured all of Rossini’s high-spirited humor and gave the composer’s trademark crescendos plenty of punch.

Zhang’s approach to the Rossini overture was emblematic of her overall podium style. She had a strong physical connection with the music that recalled former SLSO Music Director David Robertson. Her movements were economical and fluid, and her cueing was precise and unambiguous. I had the impression that she would be easy to follow. Given her generally brisk tempo choices, that struck me as an essential virtue.

This was a concert that simply bristled with energy and excitement. I’d be happy to see her return to Powell Hall in the future.

I’d  be happy to see Georgi Li return as well, based on the excellence of his performance in the next piece, Rachmaninoff’s 1934 “Rhapsody on a Theme of Paganini,” Op. 49. This set of 24 variations on the twenty-fourth and last of Niccolò Paganini's "Caprices" for solo violin served as a showpiece for the composer’s formidable keyboard skill during his lifetime and has continued to do the same for pianists ever since.

Li demonstrated an admirable variety of tone and a wide emotional range in the “Rhapsody”—crucial skills in a work that encompasses a wide assortment of moods. From the swooning romanticism of the popular 18th variation to the pointillist exactitude of the first three variations,  to the big power chord pianism of the final five, Li proved to be a master of all he surveyed. In addition, he and Zhang were always in synch, even though there appeared to be little direct interaction between them. It was the sort of thing that makes one wonder if there might actually be something to telepathy.

Next was a perfect encore: Giovanni Sgambati's transcription of the ethereal "Melodie dell'Orfeo," part of the "Dance of the Blessed Spirits" from Gluck's "Orfeo ed Euridice." The melancholy lyricism of the piece was an ideal “palate cleanser”.

The concert concluded with galvanizing interpretations of "The Fountains of Rome" and "The Pines of Rome,” the first two of the three tone poems Ottorino Respighi composed between 1916 and 1928 to celebrate the Eternal City.

Like so many of Respighi's scores, both “Fountains” and “Pines” are virtual textbooks of orchestration, with elements of Debussy, Ravel, and even Richard Strauss all mixed with Respighi's own unique point of view to produce a rich palette of instrumental color. The shimmering violins and Jelena Dirks's elegant oboe set the scene for “The Fountain of Valle Giulia at Dawn”. Roger Kaza’s horns sang out bright golden light for “The Triton Fountain in the Morning” while the play of the fountain's naiads was brought to sparkling life by Allegra Lilly and Megan Stout's harps.  The brass and percussion sections embodied the majestic “Fountain of Trevi at Midday” and the bucolic atmosphere of “The Villa Medici Fountain at Sunset” was enhanced by the birdsong of flutists Matthew Roitstein and Jennifer Gartley, along with Ann Choomack on piccolo.

“Pines” brought the evening to a big cinematic finish.  Weaving nature painting with bits of Roman history, “Pines” takes us from noisy children running riot at the Villa Borghese (raucous arguments from the horns and brasses, played with spirit and precision), to a haunting “Pines Near a Catacomb"—solemn, slow themes in the low strings, brasses, and piano—where a mysterious chant begins in the trumpet (a perfect solo by guest artist William Leathers from offstage left), builds in the full orchestra, and then cross-fades to a peaceful moonlight night in “The Pines of the Janiculum.” Peter Henderson’s piano and John Estell’s celesta set the mood along with the woodwinds and, finally, the recorded sound of a nightingale.

The certified rouser, though, was the final movement, “The Pines of the Appian Way,” in which the Roman army approaches slowly to the ominous tread of the percussion, piano, and contrabassoon. Trumpets, trombones, tuba and even an organ (guest artist Andrew Peters) join in and eventually the audience was literally engulfed in sound as the six offstage brass players (placed house left and right in the dress circle) were added to the mix. To work properly, this final section needs to build gradually and inexorably, with close coordination between the onstage and offstage players. It certainly did Saturday night, garnering thunderous applause.

Next at Powell Hall: If it’s December it must be time for Handel’s “Messiah.” Baroque-era specialist Laurence Cummings leads and appropriately downsized St. Louis Symphony Orchestra and Chorus Friday at 7:30 pm, Saturday at 8 pm, and Sunday at 3 pm, December 2-4. The Saturday concert will be broadcast live on St. Louis Public Radio and Classic 107.3.