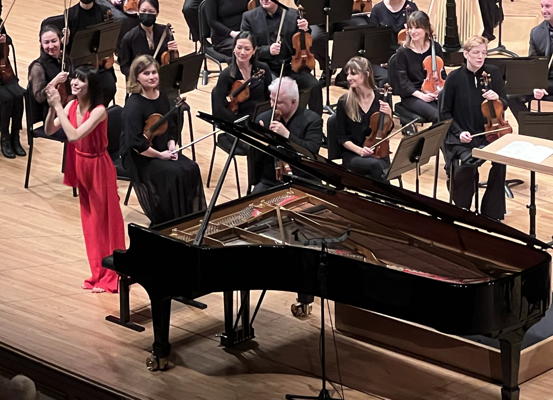 Symphony Review: A romp through Ravel's candy store by Ott and Măcelaru at the SLSO

The year 1908 marked an important milestone in cinema history—the composition of the first-ever original film score. The film in question was the French historical drama “L’Assassinat du Duc de Guise” (“The Assassination of the Duc de Guise”) and the man asked to write the score was the celebrated Camille Saint-Saëns (1835-1921). Although then in his early 70s, Saint-Saëns was “fascinated by the offer to undertake something that had never been done before.” Possibly because, in reality, it wasn’t much different from the operas and theatrical incidental music he had written in the past.

Last Saturday (December 14th), guest conductor Cristian Măcelaru opened his St. Louis Symphony Orchestra concert with the local premiere of some of that incidental music: the last of the three “Tableaux symphoniques d'après La foi," Op. 130. Written the year after his movie music, the three tableaux were compiled from the incidental music Saint-Saëns had composed for the drama "La foi" (literally "The Faith," but usually translated as "False Gods") by playwright/polemicist  Eugène Brieux (1858-1932).

Set in ancient Egypt, “La foi” offered plenty of opportunities for Saint-Saëns to indulge in the picturesque orientalism that can be heard in the “Egyptian” Piano Concerto (1896) and the opera “Samson et Delila” (1877). Taken entirely from the play’s fourth act, the music vividly depicts the opening of the temple of Isis for the annual fake “miracle” of the goddess coming to life.

The opening “Egyptian” march for the ponderous entrances of the Pharoah and his lackeys provides great moments for the brasses, played with much splendor Saturday night, followed by a reverent hymn executed beautifully by the strings. There’s some dramatic stuff for the woodwinds, as well, as the temple opens to reveal the statue, including some stratospheric passages for the flutes and piccolo, all done to a fine turn. The whole thing ends with a stirring and powerfully played orchestral apotheosis as the disillusioned priestess Mieris renounces a faith based on trickery. Măcelaru kept it all moving along, the unavoidably episodic nature of the music notwithstanding. Saint-Saëns’s score might not be especially remarkable, but the SLSO’s performance definitely was.

The evening closed with the Symphony No. 1 by Dmitri Shostakovich (1906-1975). Written as a Leningrad Conservatory graduation piece and first performed in 1926 (when the composer was only 19), the exuberant work thumbs its nose at conventional symphonic structure, with sharp contrasts of mood and orchestration. Sarcastic bombast gives way abruptly to anguished gloom, especially in the second and third movements, and the final Allegro molto wraps everything up in an abrupt flourish of brass and percussion. It’s not as episodic as the “La foi” music, but the sudden changes in atmosphere can make it feel that way.

It all sounded splendid Saturday night, in any case. The many solo bits were beautifully played, such as the little off-center waltz for the flute and clarinet and the eccentric violin solos in the first movement, the athletic clarinet line that opens the second, and the tormented oboe and trumpet figures in the third. Concertmaster David Halen and Assistant Concertmaster Erin Schreiber had a number of piquant moments throughout the work as did Principal Cello Danny Lee just before that “coming out of nowhere” slam-bang fortississimo finale in the last movement. Kudos to Măcelaru for giving full rein to Shostakovich’s sonic extremes while keeping it all in proportion.

In between the Saint-Saëns and the Shostakovich was an elegant, poetic, and technically impeccable Piano Concerto in G by Maurice Ravel (1835-1937), with soloist Alice Sara Ott romping through the composer’s tricky music (the composer himself was unable to perform it at its 1932 premiere) like a kid in a candy store, ably supported by Măcelaru and the band .

The sheer glee with which Ott polished off the fast and furious final pages of the first movement was a joy to hear and see. Her version of the delicate, “smiling through the tears” waltz of the Adagio assai second movement was subtlety lyrical.  When she was joined by the interlaced solos of Principal Flute Matthew Roitstein, Principal Oboe Jelena Dirks, Principal Clarinet Scott Andrews, and Principal Bassoon Andrew Cuneo , the result was a gracefully woven web of sound that could not have been more quintessentially French. The Presto finale had a cheerful sense of snap and panache.

This was, in short, a Concerto in G of great wit and creativity, so it was hardly surprising that Ott’s choice of an encore was equally original: Arvo Pärt’s deceptively simple “Für Alina,” with its quiet intimations of chimes and softly chanting choirs. It was an unusual choice and a perfect contrast to the carnival jollity of the Ravel.

Next at Powell Hall: Stéphane Denève returns with piano soloist Hélène Grimaud for Brahms’ Concerto No. 1, Detlev Glanert’s “Weites Land” (“Open Land”)—subtitled “Musik mit Brahms” (“Music with Brahms”)—and the world premiere of the “Concerto for Orchestra” by St. Louis–born Kevin Puts. Performances are Saturday at 8 pm and Sunday at 3 pm, January 21 and 22. The Saturday concert will be broadcast live on St. Louis Public Radio and Classic 107.3.