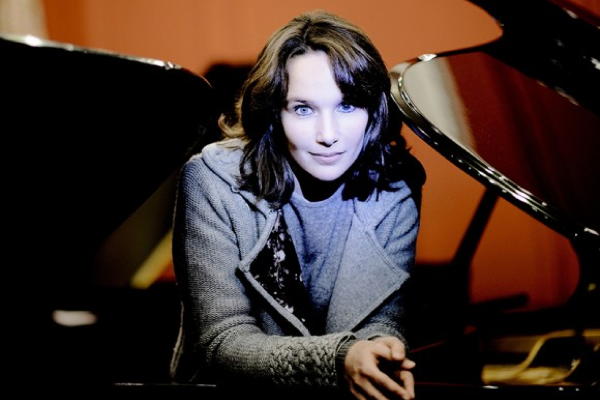 Symphony Review: A stirring performance by Hélène Grimaud highlights a mix of old and new at Powell Hall

The unsettled spirit of Johannes Brahms was very much in evidence at Powell Hall with the St Louis Symphony Orchestra’s January 21st program in its 143rd season under the expressive baton of Music Director, Stephane Denève. Brahms’ challenging First Piano Concerto, with French pianist Hélène Grimaud at the keyboard, provided the emotional core of the program. This monumental work shared the evening with two contemporary compositions performed, respectively, as a premiere for the SLSO and as a world premiere performance.

The program opened with the marvelously evocative “Weites Land” (“Open Land”) by German composer Detlev Glanert. Glanert shares with Brahms Hamburg as his birthplace and quite specifically ties this 2013 composition to Brahms’ musical tradition and more broadly to the expansive landscape of Northern Germany. Indeed, the piece is subtitled “Musik mit Brahms” (“Music with Brahms”) marking his intention to connect with his predecessor.

Glanert begins by quoting the unmistakable opening figure of Brahms’ Symphony No. 4 in E Minor—a falling major third played by the strings. He uses the same notes but slows the cadence many fold and immediately introduces his own urgent contemporary rhythms and timbres in the anxious figures in the upper strings. As traces of Brahms’s motif continue to appear as a thread throughout this exciting composition, it quickly becomes entirely its own creation, and a rather magnificent one at that.

The composition bears an unmistakable cinematic thrust, employing the colors of the sections of the orchestra in an exhilarating effect at once disorienting and triumphant. The informative program notes by Benjamin Presetsky noted a connection to the film scores of Bernhard Herrmann. Indeed, it is easy to image this “Weites Land” providing a compelling alternate score to the iconic and unsettling wide open scenes in Hitchcock’s “North by Northwest,” made so unforgettable by Herrmann’s score.

The St. Louis orchestra brought precision and excitement to its rendering of this 11-minute romp.

Rounding out the first half of the program was St. Louis-born Kevin Puts’ “Concerto for Orchestra.” The Pulitzer Prize-winning Puts wrote the Concerto as a commission specifically for the St. Louis Symphony and was inspired to reflect his strong friendship with Denève and his appreciation for the players of the orchestra. In a pre-concert interview with Peter Henderson, Puts shared how his process for conceiving of a new piece depends highly on knowledge of the performers, living with ideas for a while, letting them rest and then coming back to them.

Unlike a more traditional solo concerto, this “Concerto for Orchestra” seeks to highlight the various sections of the orchestra as a group. While there are certainly solo features for principal players, the overriding impression is of the virtuosic strengths of the full orchestra, with strings, winds, brass, and percussion all taking the lead at times.

The composition seems at first of monumental scope, consisting of six contrasting movements. Puts claims the Amanda Gorman poem, “The Hymn for the Hurting” as the creative entry point for the composition. Gorman’s poem was written in response to the May 2022 shootings in Ulvade, Texas, and Puts cites the first movement as his musical reaction to the poem. Indeed, the first movement is a tender melodic hymn, rendered particularly exquisitely at first with unison woodwind principals soaring over a gentle cushion of strings.

Each relatively brief succeeding movements adds a new idea to the mix. An energetic “Caccia” (a sort of canonic hunting song) is followed by “Music Box with Arietta,” a truly magical texture created with rippling harp and celesta under lyrical solos in the woodwinds. An exceedingly brief but driving “Toccata” leads to a languid “Sicilienne” (the most extended movement by far) and the last movement brings back another “Caccia,” this time with a brief quotation from “The Marriage of Figaro.” Allegra Lily’s harp and Peter Henderson’s keyboard work were especially engaging throughout.

Puts always engages the audience with rhythmic and harmonic innovation while still maintaining a warm sense of familiarity, with frequent references to classic music forms combined with fresh flourishes. Only in the Sicilienne did the music seem a bit too meandering. Although each movement provided considerable interest, overall, the full composition seemed a set of only loosely related ideas rather than growing and connecting organically from the original poetic inspiration. At its conclusion the concerto and its composer were greeted with an immediate and extended ovation from the energized audience.

In a program beginning with two pieces composed within the last decade, perhaps it is surprising that the most daring and exciting piece of the evening was the one composed more than 160 years ago. Brahms First Piano Concerto is an unusual representative of the genre, defying many of the norms of the time. The piano and orchestra are almost treated as equals; the piano is never given a brilliant showy cadenza (although virtuosity is certainly required), and it is altogether anxious and almost introspective at times.

This can be understood, in part, in light of the circumstances surrounding its composition. The default image for many is “Papa Brahms,” the portly, older, slightly unkempt bearded gentleman so often pictured in literature (as he was in the evening’s program). But it is important to note that this concerto was written by a strapping, clean-shaven, and handsome young man just discovering his adulthood. Brahms, in his early twenties in 1853, had just been anointed as the prospective successor to Beethoven by Robert Schumann. That burden alone would be a lot to live up to, but Schumann attempted suicide shortly after their acquaintance. For a time, the young Brahms was a significant emotional support for both the institutionalized Robert, a sort of hero, and to the talented Clara Wieck Schumann, Robert’s wife, with whom Brahms formed an intimate yet ambiguous bond.

Brahms worked on his piano concerto over the course of five years, clearly struggling to find his “voice” in this, his first orchestral composition. He started out to write a sonata for two pianos, abandoned this idea for writing a symphony, and ultimately decided that the ideas required piano and orchestra working together.

The first movement is the portion that was retained from his initial efforts. The orchestra introduces the major thematic elements in an extended opening full of tension and drama bolstered by persistent timpani answered by straining string passages. But when the piano enters at last (after more than four minutes) it is not in the same assertive style but rather as a tender, almost meditative waltz. These contrasting moods interact and morph into a variety of styles most of which provide a glimpse into the musical foundation for what will become the mature adult Brahms. But there is still an unsettling conflict expressed here which can only be a representative of the composer’s own inner turmoil at the time.

Soloist Hélène Grimaud clearly owned and embodied this essential drama in her stirring performance. There are significant passages in comparative lower registers for piano and Grimaud so effectively expressed her presence as a partner with the orchestra rather than a separate featured voice. The full orchestra also inserted the shifting drama in their playing. Of particular note were the hauntingly beautiful French horn calls by Tod Bowermaster.

The second and third movements create a moderating response to the angst of the first. The Adagio (given the descriptor in the score by Brahms himself “Blessed is he who comes in the name of the Lord”) is generally viewed as a sort of prayer to Clara. Again, Grimaud’s sensitive touch created a breathtaking portrait of love played over serene writing for strings with touching wind figures.

The vigorous Rondo brings the concerto to a close, putting aside the tension of the opening and bringing us to the sunlight in a joyous celebration of the possible. Again, the audience responded with exuberance to this powerful and emotional presentation by Grimaud, Denève, and the full orchestra.

This presentation by the Symphony embraced what is essential in creating an enlivening musical environment for both performers and audience. Interpreting contemporary voices but also celebrating the continuing urgency in the long tradition of classical literature.

The program was repeated on Sunday, January 22.

Next at Powell Hall: Stéphane Denève conducts the world premiere of "Visions of Cahokia" by James Lee III, Leonard Bernstein's "Serenade (after Plato's Symosium)" with violin soloist James Ehnes, and  the Symphony No. 2 by Sibelius. Performances are Saturday at 8 pm and Sunday at 3 pm, January 28 and 29 at Powell Hall in Grand Center. The Saturday concert will be broadcast on St. Louis Public Radio and Classic 107.3.