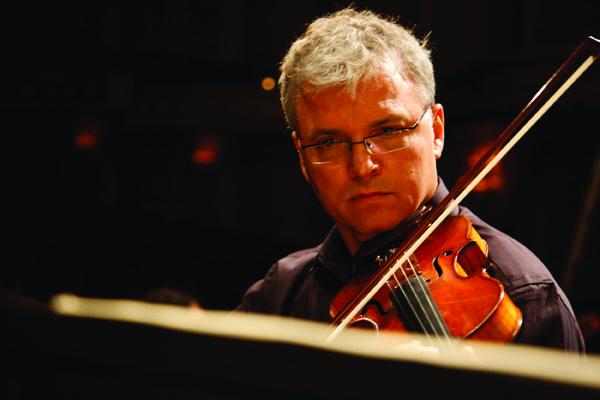 What with the all the hot air lately, both climatological and political, it has been difficult to really get into the holiday mood, but Friday night's St. Louis Symphony concert might just have gotten me over the hump.

It wasn't just the music that did it, although the mostly Tchaikovsky program was certainly chockablock with memorable melodies. The festive mood actually started with the Powell Hall lobby, which is decked out in its annual holiday finery, complete with green garlands gleaming with lights.

Adding to the sense of occasion was the fact that the guest conductor was Ward Stare, the former SLSO Resident Conductor and a popular figure with local audiences. And finally, there was the fact that the soloists were all members of the band: Concertmaster David Halen, Principal Harp Allegra Lilly, and Principal Cello Daniel Lee. Who, to quote Ira Gershwin, could ask for anything more?

The concert opened with the only non-Tchaikovsky piece on the program, the overture to Alexander Borodin's patriotic opera Prince Igor. Left unfinished at the time of the composer's death in 1887, Prince Igor was eventually completed by Nikolai Rimsky-Korsakov and Alexander Glazunov, and the overture is mostly Glazunov's work.

It is, in any case, a lively and engaging piece, laid out in something like sonata form with a portentous introduction and a lyrical middle section bracketed by energetic statements of themes from the opera. Mr. Stare gave the middle section an extra helping of romance, which made the contrast with the rest of the overture that much more marked. The difference it made was subtle but gave the work more dramatic shape than a more prosaic reading would have produced.

The orchestra played quite well, even though they haven't performed this music in over 45 years. The overlapping brass fanfares that pop up multiple times were especially crisp. Mr. Stare singled out Third Horn Tod Bowermaster and Associate Principal Clarinet Diana Haskell in the curtain call for their work, but everyone sounded at the top of their game.

Speaking of musicians at the top of their game, David Halen (to extend this metaphor a bit) hit multiple homers in the suite of six selections from Swan Lake (1876) and two from Sleeping Beauty (1889) that made up the rest of the first half of this program. With the exception of the familiar opening scene from Swan Lake, the numbers selected all gave Mr. Halen the chance to show the many moods of his virtuosity, from the delicate Sleeping Beauty "Entr'acte" to the fiery "Danse Russe" from Swan Lake. Spontaneous applause broke out after the "Pas de deux: Black Swan" Friday night, and Mr. Halen got a well-deserved standing ovation at the end.

The spotlight wasn't entirely on Mr. Halen, though. The "Pas d'action: White Swan" also gave Ms. Lilly and Mr. Lee a chance to show off in captivating duets with him. All of this was a reminder of what world-class musicians we have in our orchestra. Some visiting "big name" soloists might have generated more excitement in advance, but I strongly doubt that they could have played any better.

The most Christmassy part of the evening, however, came after intermission with the complete second act of Tchaikovsky's popular 1892 Christmas ballet The Nutcracker. Technical difficulties caused a last-minute cancellation of the planned projected images courtesy of Webster University's Leigh Gerdine College of Fine Arts, but it hardly mattered. Tchaikovsky's music is so filled with colorful orchestral touches that audience members who were familiar with Nutcracker (or with Disney's Fantasia, for that matter) were no doubt able to supply their own visuals.

Opportunities for individual players and sections to take center stage abound in this part of the ballet. So we had icy trills from Mark Sparks and his fellow flautists in the opening scene at the Magic Castle, Karin Bliznik's commanding trumpet in the "Spanish Dance," the sinuous bass clarinet of Tzuying Huang at the end of the "Arab Dance," the lively contrast of Ann Choomack's piccolo and Andrew Cuneo's bassoons in the "Chinese Dance" and, of course, Peter Henderson's star turn with the world's most famous celesta solo in the "Dance of the Sugar-Plum Fairy," complete with the less-often heard coda.

Mr. Stare conducted all this with the obvious joy and enthusiasm that has always marked his time on the podium. This was a well thought-out reading with plenty of variety and a strong sense of theatre. To quote a Noël Coward lyric, "I couldn't have liked it more."

Holiday concerts take up the rest of December, including A Gospel Christmas on December 8, music by Mannheim Steamroller on December 9 and 10, and the annual Macy's Holiday Celebration concerts December 16-18. Visit the SLSO website for more information.