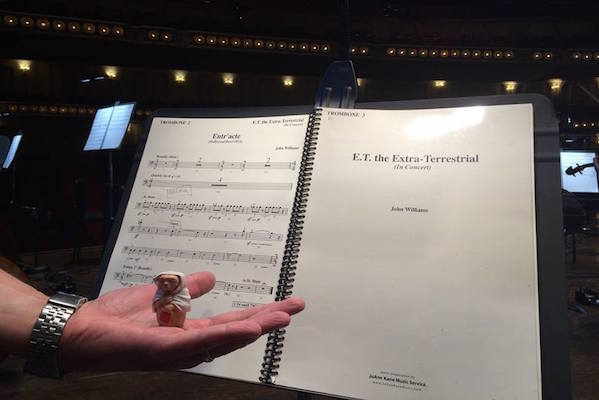 'E.T.' in concert shows its age, and that’s a good thing

Steven Spielberg's blockbuster E.T. the Extra-Terrestrial, a live concert version of which is on view at Powell Hall this weekend, is 34 years old now and beginning to show its age -- which is not necessarily a bad thing.

A product of a time when pacing in popular films was somewhat less frenetic and music was less omnipresent, E.T. is shamelessly manipulative but skillfully made. The wordless opening sequence, shot from the point of view of the diminutive aliens, makes the humans pursuing them look massive and threatening. The iconic flying sequences still look great. And the final farewell sequence can still tug at the heartstrings.

As with other St. Louis Symphony movie events, of course, the emphasis is on the score, performed live by the orchestra as the film is shown on the big screen above them. The music for E.T. was composed by that most famous and prolific of living film composers, John Williams. It earned him the fourth of his five (to date) Academy Awards, and it's easy to see why it was so honored. It's melodically appealing and vividly evocative stuff, employing the full resources of a late romantic symphony orchestra in creative and sometimes surprising ways. And even though Williams' harmonic palette is fairly conventional, he's not about using dissonance, string harmonics, and eerie glissandi when the dramatic situation calls for them.

Under the baton of Erik Ochsner -- who conducted the SLSO for the concert version of Lord of the Rings: Fellowship of the Ring back in 2011 -- the orchestra sounded like the finely tuned instrument it has become over the years. For his part, Mr. Ochsner was very engaged with and friendly towards the musicians under his baton -- not an easy task given the need to divide his attention between the printed score and the film (complete with the visual equivalent of a click track) playing out on a monitor mounted on the podium.

It would be easy to dismiss the SLSO movie events as mere potboilers intended to improve the orchestra's balance sheet, but that would require one to overlook the amount of dedication and talent it takes to pull them off. And besides, hearing this music live reveals orchestral details that are only really apparent in a concert hall. I hadn't realized, for example, how often the harp and keyboards (piano and synthesizer) were featured. SLSO Principal Harp Allegra Lilly and keyboard player Peter Henderson (who, for reasons which escape me, is still not the Principal for that section) were kept quite busy and were the first soloists to asked to stand at the end as a result.

There is one more showing of the concert version of E.T. today, Sunday, at 2 p.m. It's genuine family fun and highly recommended. You might even find yourself tempted to come back this Friday or Saturday when Yan Pascal Tortelier conducts the orchestra with piano soloist Louie Lortie in Saint-Saëns's Piano Concerto No. 5 ("Egyptian") and Mussorgsky's Pictures at an Exhibition in the familiar Maurice Ravel orchestration. Performances take place at Powell Symphony Hall, 718 North Grand. For more information, visit the St. Louis Symphony web site.