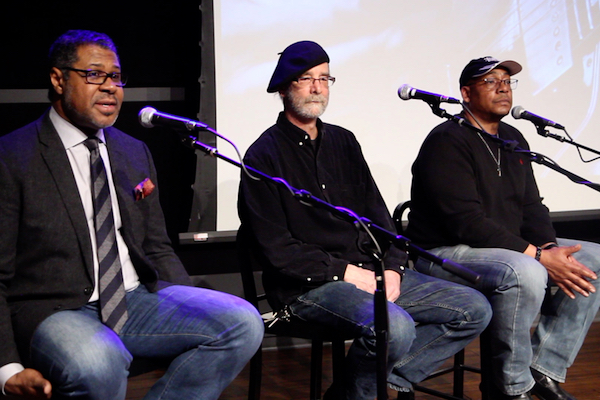 Race and the Blues in St. Louis conversation recap of The Present: Reality of Blues Music Today

"We have to discuss the elephant in the room, race and racism," said Dr. Rosalind Norman, the moderator for the February 11 Race and the Blues in St. Louis conversation, "The Present: Reality of Blues Music Today." Their stepchildren, negative labeling, cultural bias and appropriation had been identified in the previous week's dialogue on "The Past: Stigma of the Blues."

To set the context for a discussion of tradition, appropriation, value and culture Dr. Norman cited Dr. Martin Luther King Jr.'s 1967 speech, "The Other America," that identified a dominant white culture and another that was poor and black. She said, "We need to think about how that plays into people perceiving them on a cultural basis." And, she used a quote, "if you destroy their history, you destroy their achievements and it's as if they never existed," from the 2014 film Monuments Men, to highlight the importance of acknowledgement to the discussion.

Norman stressed the need for honesty and respect in a potentially difficult and discomforting conversation. She then then posed a series of questions for the panel on working in the industry, competitive compensation, of copyright laws, perceptions, and investment in the music. The panel for this discussion included the leading institutional figures in the city's blues and jazz scene: Dion Brown, Founding Executive Director of the National Blues Museum, Gene Dobbs Bradford, President and CEO of Jazz St. Louis, and John May, General Manager for BB's Jazz Blues and Soups.

Bradford thought the first week's panel was a nice segue "because you can't talk about the support for the organizations we have without talking about the value people put on the blues in our society." May was in full agreement contrasting the amount of money people put into sport and theater tickets with "somebody who has been doing live music their entire life, hustling to get $5-10 per person to pay their bills and do their craft." May also noted that the city provides little support for an art form that attracts international visitors.

Bradford sees efforts around the country to educate the public that jazz is as just as important a cultural institution as a symphony, opera, or ballet making progress. "The next step," according to Bradford, "is to create a tradition of giving."  For the blues, he sees a longer journey because it is "a cultural institution in its infancy."

There was consensus among the panelists that copyrights can protect musicians and that the manipulation experienced by an earlier generation of uneducated artists had diminished. "Today's modern musicians have learned from the past," Bradford observed, "and are savvier in making sure that the rights and contracts are taken care of." Brown agreed that the younger generation is better protected but cautioned, "you have to be up on your music to see if somebody is using it."

There is also an underlying reality as May reminded everyone: "Unfortunately, the people that could have or should have benefitted the most out of blues, the majority of those original innovators are gone. If you didn't see them and feel them, you can listen to a record but they're not going to get the benefit of what their true value was when they produced that thing."

Another reality identified by the panel is the disruptive impact that technology has had. Technology has made self-production more affordable and the web made access to music easier. Bradford has experienced it: "Jazz labels used to send out materials and posters for a band touring in support of a record. Now people tour in hopes people will download their music."

May sees the new business model every day at BB's. Most musicians have products to sell but they no longer make label records, track royalties or units sold. "You can get to much broader audiences by going to the internet and marketing yourself and make money and not be trapped by having to be connected to the record company and the contracts," he said.

The National Blues Museum uses technology to promote artists by streaming and archiving every live performance. They want people to see artists and book them. Their online performances have resulted in "people flying in from Alaska to see Marquise Knox and a doctor from Pittsburgh to see Big George Brock."

The issue of appropriation crosses racial and artistic lines. The blues revival in the U.S. was driven by bands from England as much as U.S. folk artists exploring their musical roots. It helped revive careers of blues artists and inspired a new generation of musicians. The problem is that the original musicians were not compensated at anywhere near the rate as those they influenced.

"Today," Brown observed, "The shift is on and it has been. When you go these festivals 90% of the participants and band members are white people and these artists are very qualified to play." Bradford stressed what a fine line appropriation can be: "You exist in this time period. You're listening to the sounds that are around you. You try to take your influences and make your own artistic statement. You try to take that and fuse it into something honest that reflects who you are."

May had a similar perspective: "Sometimes when listening to an artist I will hear something that reminds me of someone I had met years ago but they don't even know it. They had absorbed it musically. They weren't stealing anything they were emulating it." He also believes artists need to understand the value of originality: "Recording someone else's music doesn't mean that you are an artist. It means you are duplicating something that's already been done. If you have a value, then it's probably more relevant if it's something that's truly original."

Originality and acknowledgement is one step in addressing appropriation.  Emulation, absorption and adaptation all feed into artistic expression. Pay for what you appropriate was one message from the panel. The other was to encourage more original blues music along with awareness and acknowledgement of its roots.

A question about investing in the blues drew many of the strands of the afternoon's dialogue together. May said he knows about it because, "I invest in it every day by having a venue that will support music and encourage artists to make a living out of it." A founding member and former board chair of the St. Louis Blues Society, he took pride in the three decades of the organizations and events: "Those were a creation of a community of people that were completely invested and were working together. Success isn't necessarily measured in money. Success is that we brought great St. Louis music and events to the public."

Brown advocated for first-hand experience. "Take a deep trip down to the Delta," he said, "and find out what those people went through. Understand what your singing about. It came from within."

Bradford urged people to learn "to become the evangelists," and "help change the culture of the city so that people will embrace jazz as much as the Cardinals, Ted Drewes and toasted ravioli." He wants them to use the museum, go to shows and brag about St. Louis. And to do it with swagger.

The honesty and discomfort that Dr. Norman alluded to became apparent during the comment portion.  One white musician framed his copyright question by first talking about racism and how his eyes had been opened to "a lot of pain that goes back a long time in St. Louis" because of the Michael Brown shooting. Another long time musician agreed the that conversation about appropriation was needed, but he worried that it might lead to people saying, "this person can't play the blues because they're white."

Brown and Bradford quickly reject the notion that color determines who can play. Brown said, "If it's in you, play it. But respect the history, respect the forefathers that created this music form." Bradford agreed, adding, "the real issue is the African Americans that created the music weren't able to enjoy the spoils of the success the music would have when performed by people who weren't black."

May responded to a question about black musicians going to white clubs for recognition, but white musicians avoiding black clubs. He recalled how things were: "All of us learned blues in black clubs from people we were enamored by. We asked to learn to play blues by real blues people, not from records." He praised Oliver Sain's nurturing influence in teaching professionalism, integrity, publishing, craft, and community. The more troubling question raised by May was, "is that our problem, or is it because there is a whole generation of younger black people that reject blues as a form because they have moved on?"

Two audience members pointed out that "racism and classism coexist." Blues were perceived as a lower class of music. The music itself reflected class differences because it came from people who had everything taken away from them. Social media was seen as one vehicle to break down the barriers.

The conversation about heritage and race was honest and at times uncomfortable, but the shared experience of the music is not. One musician finds the stage to be the most perfect form of meritocracy: "If you can hang and can play, you belong. It doesn't matter what you look like, how young, how old you are. The optimism of playing with such great people and having friends from across the spectrum, that's what I've always taken away from playing blues music in this town."

May sees the joy and diversity of the musical experience in his own club: "When I look at BB's audiences I see a beautiful spectrum of people ... white, black, young, old, European, Asian, Brazilian ... everybody's in the same room having a really good time and they're not talking about what color you are. They're not talking about what's authentic. They're actually participating in an experience that's not only about the music, it's a venue and the people within it."

The succinct closing thoughts of the panel echoed these themes. Bradford told people: "Believe in the power of music to bring people together and unite our community. Get out there and support it. Be evangelists for it."

May reiterated his support for the music and musicians: "Be honest. Don't be angry, and make sure to support the people that deserve your support. If they're true musicians they're giving you their heart and soul. You deserve to give something back. If it's money, great. If it's respect, always. Tell the truth and don't be angry."

Brown called for solidarity: "Blues is a healer. Blues is a unifier. It will bring everyone together...We need each other to make this whole melting pot work."

The second dialogue, The Present: Reality of Blues Music Today, gave us panelists with an institutional perspective and an audience that spoke truth to power. The result was a wide ranging substantive discussion that ran from tradition, value, appropriation and culture to respect, integration, and unity. The dialogue paved the road for the final installment, The Future: Evolution of the Blues, which will take place on February 25 at The Stage at KDHX.